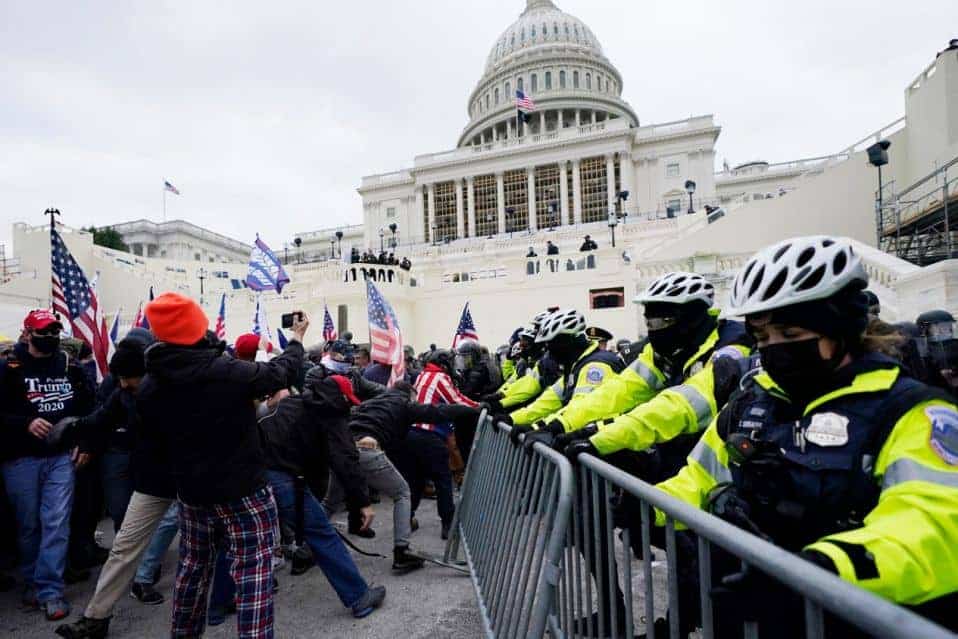 The MSM is in overdrive this morning churning out their lies. I have three friends who attended the pro-Trump rally in DC yesterday and videotaped the peaceful protesters; average conservative Americans gathered together to exercise their freedom to peacefully assemble and protest the blatant election fraud. Good people. Decent people who don’t want their beautiful country to be taken over by communism.

The violence wasn’t caused by these people.

Yes, it was Antifa. Several videos and testimonies of people who were there proves it was Antifa – whoever they really are. Think about it; no one could have gotten inside the capitol building without inside help. The entire thing was staged.

At this point if anyone is still believing anything reported by the mainstream news outlets I don’t know what to say to them. They’re doing a great job of exposing themselves for what they are. But like I’ve been saying, that was the plan all along.

As frustrating as it is to see the deliberate misreporting of yesterday’s events splashed across every media outlet ad nauseum, there’s something much heavier on my heart, and that’s the spiritual deception of well-meaning Christians. All these good, decent people who were raised in God-Bless-America have been indoctrinated into patriotism; love of country; pledging “allegiance” to a flag when our ONLY allegiance is to be to our King. Together with this love of country has come trust in its appointed leaders and the left/right paradigm – two wings/same bird and all that. With this tactic they’ve successfully divided a nation. “Divide and conquer” – we’re familiar with the term, right?

Yesterday’s rioting is being called America’s Kristallnacht, and make no mistake; there IS an agenda behind this thing. Conservative Christians are already being demonized over the violence yesterday at the Capitol, but how it will play out, whether Trump still has any tricks up his sleeve is yet to be seen.  Throughout the last year we’ve seen supporters calling for Trump to declare martial law for instance. I can say with full assuredness, that is not what anyone should hope for!

I am grieved just as much as anyone else as I watch what’s happening in America, but Trump supporters, especially Christians, need to see that they are being played! I could cite countless things to support that, but for now let’s look at his tweet yesterday where he refers to his election victory as being “sacred.” Twitter has since removed it for violating their community guidelines.

Brothers and sisters; the election was not “sacred!” As much as we are opposed to corruption and Communism, Trump is not God’s anointed one who will save America from the evil Democrats!

Let’s back up a minute and look at the underlying belief that got us to this point. The idea that has believers out fighting to “make America great again” in the first place is nationalism – not New Covenant Christianity. Don’t get me wrong, I respect the people who are willing to stand for what is right. Far too many people are silent in the face of evil. But before we run out there and join the fight for our physical nation, convinced that this is our battle ground, we need to get into our Bibles, read, pray and ask ourselves; Does the Word of God really tell us to fight for a physical nation? No, it doesn’t. In fact the only nation the New Testament says we belong to and to which we owe our allegiance is spiritual!

But you are a chosen people, a royal priesthood, a holy nation, God’s special possession, that you may declare the praises of him who called you out of darkness into his wonderful light. (1 Pet 2:9)

We read in Matthew 4:8 where satan offered Jesus all the kingdoms of the world in the temporary realm of the flesh. He refused, as should we, because Jesus’ kingdom is eternal, and it is not of this world.

The only place in scripture you’ll find where God has people fight for a nation is in the Old Testament; under the Old Covenant. Nationalism is not compatible with New Covenant Christianity!

So many believers have spent months praying for a Trump victory; placing their faith in the FLESH to exact change in the world. I’ll say it again;

If we have been born in spirit through Jesus Christ, life for us is no longer found in the Flesh but in the Spirit.

As the New Humanity (Eph 2:15 NIV) we are Christ’s ambassadors in the world. We are a new creation, one holy nation; our citizenship is in heaven – now. We have been called out of darkness into the Light. Jesus the Messiah and King is the Light to (ALL!) the nations. In the New Humanity there is no longer division between Jew or Gentile – all former barriers of race, culture and nationality have been broken through the cross of Christ.

Under the belief that they are fighting for a righteous cause, Christians are “Storming the heavens” with misguided prayers for this physical nation. They tragically miss the reality that His kingdom has come! It is here, now. It has been here since Jesus rose from the dead. And it is OURS! (Luke 12:32) Our lives here on earth are not about living in safety, comfort or prosperity. To think that is where life is found is to subject ourselves again to futility and, importantly, satan’s control over us through fear of (physical) death and his social engineering – when in truth our lives have the much greater spiritual purpose of shining Jesus’ light; sharing His hope! (Col 1:27)

Make no mistake; the Biden camp is evil and a clear turn toward Communism, which is atheism. None of us wants that. But Trump cannot, will not save us from it. He’s not even a believer. Rather, he’s part of the strong delusion that is tempting believers to put their faith in the flesh.

Difficult days are ahead. Be sure you know who and whose you are and where your true citizenship lies.