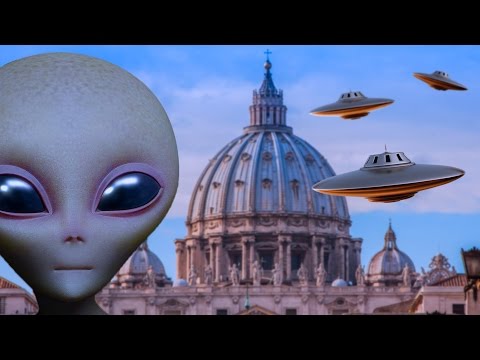 SOT
The Alien agenda that the Roman Catholic Church has now taken great interest in will play right into the coming strong delusion, (2 Thessalonians 2:11), that the bible warns of.  In fact, Jesus Christ may have given us the information we need to be able to decipher this coming delusion, as he said the days just prior to his return would be just like that of the days that defined the pre-flood days of Noah.  Aside from a world being extremely depraved and evil in every thought, the difference between the days of Noah from any other were that the Nephilim roamed the world with impunity.

These human/angelic hybrids caused incredible harm to the creation of God during the antediluvian world and were the reason for the global flood.  It is these entities that the Catholic Church are now searching and waiting for as they stare off into the stars.

As it was in the days of Noah, so it will be at the coming of the Son of Man.   Matthew 24:37 NIV
The Nephilim were on the earth in those days—and also afterward—when the sons of God went to the daughters of humans and had children by them. They were the heroes of old, men of renown.   Genesis 6:4 NIV

Former pope Benedict XVI spread consternation in the catholic world this morning as he claimed that a group of  jesuits had infiltrated the Vatican and were pursuing what he called an “alien agenda”.

In a press conference rebroadcasted live on FM german catholic radio station, Radio Horeb, the first pope to retire from his position in 598 years expressed his feelings of deception as “a sinister group of members of the Vatican are pushing on for the search for extra-terrestrial life” through their Lucifer 2 Large Binocular Telescope based at Vatican Observatory on Mt. Graham in Tucson, USA.

The Vatican made front news earlier this month when José Gabriel Funes, an Argentine Jesuit priest and astronomer, and the current director of the Vatican Observatory, sponsored a major conference in collaboration with NASA entitled The Search for Life Beyond the Solar System: Exoplanets, Biosignatures & Instruments and announced the purchase of a new 2 M$ lens for its Lucifer 2 Large Binocular Telescope.

“Just as there is a multiplicity of creatures on earth, there can be other beings, even intelligent, created by God. This is not in contrast with our faith because we can’t put limits on God’s creative freedom. Why can’t we speak of a ‘brother extraterrestrial’? It would still be part of creation” answered Vatican Observatory director, José Gabriel Funes, when asked about the role of extra-terrestrial life in the catholic faith.