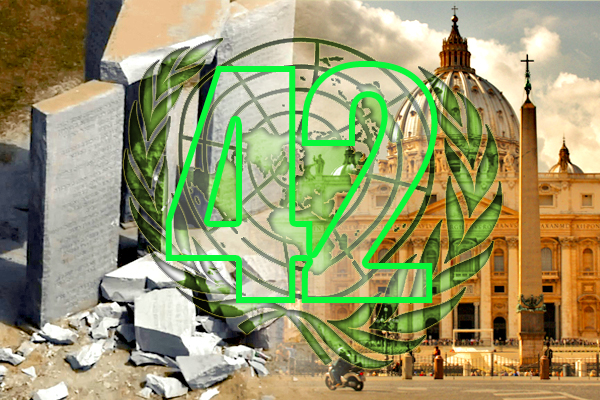 For those interested, I would like to point out a few things that I felt led to share so that you can see a deeper meaning here. I’ll be touching on the United Nations, the Vatican, the number 42, and the connections to the Guide Stones.

As the Georgia Guide Stones fell, many on social media cheered, and made claims that it was of the Father’s doing. And yes, I was glad to see them go as well. However, some of us could see that this was clearly satan’s doing.

I would say it is pretty obvious, that numbers and dates are super important to the wicked ones. And for those that might not know, it’s not by chance that they chose July 6th, ’76,’ which happens to be George Bush’s birthday, and he just happened to be turning 76. But why George Bush, his family was heavily involved in helping to build the NWO, and he is one of the most famous faces of Skull and Bones ‘322’. We know that the Guide Stones were erected on March 22nd, 1980 pointing to ‘322’. And don’t forget that George Bush’s father was the one who announced that the United Nations ‘WILL’ be successful at building their New World Order that the founders desired, in that famous speech back on Sept 11th, 1991. It’s all very spiritual!

But did you know that on the same day that the Stones were brought down, the Vatican was busy as well!

Yup, on July 6th the Vatican signed papers to join the UN Treaty on Climate Change, offering their ‘Moral Support’. Here are a few excerpts…

“Archbishop Gabriele Caccia, the Holy See’s permanent observer to the United Nations, submitted the papers for formal “accession” to the convention July 6, the Vatican said. “Accession” has the same legal effect as ratification and is used to join a treaty that already has been negotiated and entered into force.”

“The Vatican is now a formal party to the U.N. Framework Convention on Climate Change and has declared it intends also to formally join the 2015 Paris Agreement.”

“At the earliest possible date, considering the legal requirements of the Paris Agreement,” the statement said, “the Holy See, in the name and on behalf of Vatican City State, will deposit the instrument of accession” to that agreement as well.” – Crux now and NCR online

✔️On a side note, there is an interesting definition for the word ‘Accession’ other than joining a treaty…

1a: the act or process by which someone rises to a position of honor or power / the accession of a new queen, a politician’s accession to power

So now why 42 years? Sure July 6th, (7X6) would be the factors of 42. And yes in Scripture, there were 42 generations from Abraham to the Messiah. And its factors of seven and six, show a connection between man and the Spirit of God, and between Christ and the Antichrist, Rev 11:1-3 and Rev 13:4-5. But there is more.

I found this a little interesting since we know that CERN opened back up again on July 5th, the day before they took the Stones out.

“CERN’s Large Hadron Collider fires up for the third time to unlock more secrets of the universe.”

Elon Musk kept bringing up the number 42. And I kept seeing this quote…

I want to share these excerpts from an article…

“One of the most amusing stories in all of science fiction is Douglas Adams’ The Hitchhiker’s Guide to the Galaxy, where a supercomputer is tasked with uncovering “the answer.” Allegedly designed to give the answer to the ultimate question about life, the Universe, and everything, the computer spends 7.5 million years calculating what the answer would be, and finally spits it out: 42. Only, when the answer is finally revealed, no one can remember what “the ultimate question” actually was.”

“All told, there are many questions that 42 is clearly the answer to, but only a few of those questions have fundamental, universal, or cosmic implications. If it truly is the answer to the ultimate question about life, the Universe, and everything, we owe it to ourselves to try and reconstruct just what that question might be. From mathematics to physics, five vital questions emerge that legitimately have 42 as their answer.”

“It really could be the answer to the ultimate question about life, the Universe, and everything. Now, we just have to figure out what that question actually is!” -Forbes Sept 24th, 2020

Now if you want to understand how the number ’42’ connects to physics, and mathematics and has some symbolism, check the comments for a link, so that I can keep this post shorter.

We all know that blood is life.🩸 Did you know that donated blood only lasts for 42 days or🌈 rainbows always emerge offset at an angle of 42° relative to the light source that creates them? There are more interesting facts in the link. And it will help you to see why they claim that 42 is the answer to life. Anyways, it seems that Elon Musk keeps coming up in the news lately. And he loves the number 42, he put the number 42 on his Space X’s Starship. He hopes to send 42,000 satellites to space. He likes to add 420 jokes to his twitter, maybe it’s not really what people think, huh. He wiped $42 billion off Tesla value with a single tweet. And he thinks everyone should read The Hitchhiker’s Guide to the Galaxy above. So, I guess the number ’42’ has meaning to these wicked ones and it’s not all just fiction.
______________________________________

What other connections do the Guide Stones and the UN have? Interestingly, it was almost 13 years to the very day that the Guide Stones were opened on March 22nd, 1980 and the United Nations Convention on Climate Change went into effect on March 21st, 1994. Hmm, would you call that spiritual?!!!

Another interesting way to look at this, is to remember when Moses received the 10 commandments on the stone tablets, and when he brought them to the people, they were worshiping their man-made gods, and in his anger, he broke them, and he had to go back up to the Father to receive new ones.

It feels as though satan is mocking once again, he broke his 10 commandments stone tablets because he has already replaced them with the United Nations Sustainable Development 17 ‘Goals’ also known as the ‘Global Goals’, I would say these are satan’s ‘commandments’. They sound good but are for a wicked purpose.

Just the same as 2 Corinthians 11:14… “And no marvel; for Satan himself is transformed into an angel of light.”

They have big plans to ‘transform the world’ through these 17 goals. And we are watching them destroy the world daily so they can implement their commandments. As we all know their favorite slogan, ‘Order Out of Chaos’. And the head honcho, the Pope is right there as the world’s ‘Mortal Authority’. And they made that clear by their announcement of their UN ‘accession’ for ‘Moral Support’ on the same day the Stones came down. We need to be watching with spiritual eyes. 👀

👉Never forget, back on September 25th, 2015 when Pope Francis went to speak at the United Nations Headquarters in New York, he opened with

“In my own name, and that of the entire Catholic community, I wish to express to you, Mr. Ban Ki-moon, my heartfelt gratitude.”

Remember it was a gathering of all the world leaders on the 70th anniversary of the United Nations.

Why is it noteworthy, because of this verse here in John…

“I am come in the name of my Father, and you receive me not: if another shall come in his own name, him you will receive” (John 5:43).

👉And what happened at the United Nations back in 2015 when the Pope came, the Sustainable Development Summit took place, and the 17 Goals were adopted as a universal call to action to end poverty, protect the planet, and ensure that by 2030 all people enjoy peace and prosperity. And that’s why Pope Francis states that

“We require a New and Universal Solidarity”.

Do you understand it’s all about the Pope’s will, his ‘Laudato Si’ aka On Care for Our Common Home. All Popes claim to be the ‘Substitute for Jesus here on earth’, it’s one of their titles. Most don’t care about the sitting Pope, but you need to see where this is all going and who he really is.

👉This UN treaty on Climate Change (UNFCCC) that the Vatican joined, has near-universal membership. This is what they believe…

“Preventing “dangerous” human interference with the climate system is the ultimate aim of the UNFCCC.”

Remember too many people are “dangerous” for Mother Earth, so says satan’s commandments. So, the UN has a plan to fix that problem with its new ‘Global Goals’. Quote from the UN…

“The new agenda is a promise by leaders to all people everywhere. It is a universal, integrated and transformative vision for a better world.”

Well, I just wanted to share my thoughts with you. All we can do is prepare the best we can spiritually, and then mentally and physically. It is written and it’s coming. Much love my friends. Links in the comments.