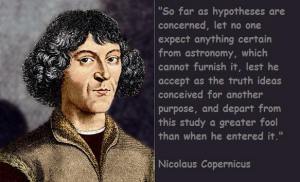 Making Sense of the Senseless

As we can see, Copernicus had some interesting opinions on the scientific method.

Reality is not important. Just lay down a nice hypothesis and say: ‘you can’t prove yours and I can’t prove mine, therefore both are equally valid’.

This is the essence of Kabbalistic thought, upon which the powerful build their solipsism. This is the foundational thought of magick, where ‘truth’ becomes a personal experience.

This is how they manipulate not reality itself, but our perception of it.

However, we have a useful tool in these matters: Occam’s razor, which states that when faced with choice, the simplest one is usually the best.

And it’s clear that both at the time and today, Occam’s razor gives clear preference to Tychonic Geocentrism and not to Heliocentrism, which cannot explain why we are not observing stellar parallax.

These quotes are really very telling about a man who is known to have been heavily involved in groups around Platonic mysticism in Bologna. Plato had maintained the Sun was the most exalted in the observable world.

“In the middle of all sits Sun enthroned. In this most beautiful temple could we place this luminary in any better position from which he can illuminate the whole at once? He is rightly called the Lamp, the Mind, the Ruler of the Universe….”

As we can see, it’s rather one sided to blame Catholics, Protestants and ‘Bible Believers’ for a religious agenda behind Geocentrism.

Because the ‘spiritual’ agenda behind Heliocentrism is quite blatant and comparing both camps it is clear that the X-tians have shown a great deal more respect for the scientific method than the Sun worshippers of Heliocentrism.

Let alone Tycho Brahe, who was a great and impeccable scientist who showed proper respect for the observable data and restraint in coming to conclusions.

Related:
Heliocentrism Is Dead. There Is No Stellar Parallax!