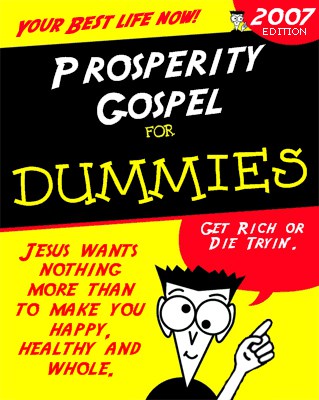 This is part III of a series on the Prosperity Doctrine found on the Talking Pentecostalism website.

Holiness and the Divine Healing movement

The Holiness movement and the Faith movement that emerged in the late nineteenth century laid foundations for the Prosperity movement that developed in the early twentieth century. The Prosperity doctrine of Pentecostalism emerged in force in the 1950s, but the seeds were sown before the turn of the twentieth century. The doctrinal changes that occurred before the nineteenth century, as far back as the Christian Perfection of John Wesley in the eighteenth century, were pivotal changes that enabled the earliest Pioneers of the Divine Healing movement and the Faith movement to build their doctrine of Prosperity.

The Holiness movement spread from England to America in the 1840s and 1850s to preserve John Wesley’s doctrine of ‘Christian Perfection’. Wesley’s Christian Perfection had a profound influence on Charles Finney, Asa Mahan, Phoebe Palmer, Ethan Allen and others in the Holiness movement, from whom prosperity doctrine distinctives began to emerge in the late nineteenth century.

The Holiness movement emphasised purification from sin and the power of the Holy Spirit. Wesley regarded Christian Perfection, or Entire Sanctification, as a second experience of grace, distinct from conversion. From the 1830s under the influence of Charles Finney and Phoebe Palmer this experience came to be viewed as an immediate, instantaneous work of perfection by the Holy Spirit, received through faith.

In the 1850s Phoebe Palmer began to refer to the perfectionist experience as a “baptism with the Spirit and with fire,” or simply as a “Pentecostal baptism.” Asa Mahan approved of this new terminology, noting that power was one of the most significant characteristics of the perfectionist experience. Palmer, in Faith and its Effects, (1854) wrote, “Just so soon as you come believing… come complying with the conditions and claim it… it is already yours. If you do not now receive it, the delay will not be on the part of God, but wholly with yourself.”

By spreading the doctrine of Christian perfection or Spirit-baptism as an experience of purification from sin and endowment with power, the nineteenth century Holiness movement provided the basic theological environment out of which the Faith Healing movement in America grew.

The fundamental basis of the Divine Healing movement betrays the close connection between Perfectionism and Healing. The basic presuppositions of Divine Healing in the late nineteenth century were, firstly, that sickness was ultimately caused by sin and Satan; and secondly, that Spirit-filled Christians were endued with Pentecostal power. Accordingly, a sanctified believer, who had received power over sin and Satan, also had power over sickness. Full salvation included not only salvation from sin but also healing of the physical body. The movement reflected the same emphasis on instantaneity as the Holiness movement by insisting that healing was available now and was to be received immediately and instantaneously. If not it was due to a lack of faith.

The Divine Healing movement emerged in force in the 1870s at the same time as New Thought and Christian Science appeared. Charles Cullis, the Episcopal physician in Boston, grew the new healing movement more than any other figure by successfully convincing prominent Holiness leaders of E. O. Allen’s doctrine, including John Inskip, A. J. Gordon and A. B Simpson.

One of those healed under the ministry of Charles Cullis in his famous Annual Faith Convention in Maine in the early 1880s was Reverend Albert Benjamin Simpson, a Presbyterian minister who had previously joined the Holiness movement. After leaving his church Simpson became one of the most influencial figures in the Divine Healing movement, primarily because of this theological developments. In 1887 Simpson wrote Inquiries and Answers concerning Divine Healing, followed by numerous other books, including The Gospel of Healing (1896).

A. B. Simpson formalised and stressed four basic doctrines: salvation, baptism in the Spirit, divine healing, and the second coming of Christ, which together became known as the ‘full gospel.’ Simpson and A. J. Gordon were among those who first began teaching that healing was part of Christ’s atonement. Simpson’s basic propositions mirrored those of Ethan O. Allen. He taught that sickness was a result of sin; that the atonement reversed the consequences of sin; and thus, healing for sickness was provided by the atonement. For Simpson, healing was a redemptive ‘right’ which we may simply ‘claim’ as our purchased inheritance as part of the complete redemption accomplished by Christ’s death and resurrection. The promise of healing was there for all, only to be received by faith.

This shift in emphasis culminated in a new ‘restoration theology’ which taught that Spirit-baptism fully restored to the Christian the spiritual relationship that Adam and Eve enjoyed with God in the Garden of Eden. Consequently, the Holiness movement began emphasising not only faith-healing; now also Spirit-baptism brought ‘the higher life in Christ’ that would reverse all the physical effects of the Fall, thus enabling believers to take authority over all areas of life. Christians by the same means as faith-healing could live a life of complete abundance and prosperity. The experience of ‘victory’ in every area of life became the divine right of all believers through faith.

John Alexander Dowie (1847-1907) was another very influential figure in the Divine Healing movement and also an important forerunner of Pentecostalism. An itinerant faith-healer who migrated to the USA from Australia in 1888, he founded and headed the International Divine Healing Association. He based himself in Illinois and began publishing Leaves of Healing. He opened a divine healing home in Chicago, which soon expanded into several homes. In 1895 he founded the Christian Catholic Church. He also founded Zion City, a community built around his vision of a holy society.

Dowie was intensely evangelistic. His two driving foci were holiness and healing. He was fiercely legalistic, insisting that followers abstain from pork and those who sought healing refrain from medicine and exercise unwavering faith. Dowie was hoping for a full restoration of ‘apostolic Christianity’ in his lifetime. In anticipation he announced himself as the prophesied Elijah in 1901, and in 1904 as the first apostle of a renewed end-time church.

Most of Dowie’s followers became Pentecostals when it emerged in America in 1906 because Pentecostalism saw itself as the end-time restoration of the ‘full gospel’ that Dowie had been expecting. Some became prominent leaders in the movement, most of whom affiliated themselves with the Assemblies of God. Those of Dowie’s followers who were still committed to his particular restorationist vision joined the Oneness Pentecostal movement that developed after the early controversies within Pentecostalism.

An important example is John G. Lake. He was an associate of Dowie and an elder in Dowies’ church for a number of years. In 1907 Lake experienced ‘baptism in the Holy Spirit’ one year after the birth of the Pentecostal movement and following went on to make an important contribution to the development of Positive Confession or Faith-Formula theology, a prosperity doctrine that emerged during the twentieth century within American Pentecostalism that triggered the current Prosperity movement.

The fact that the Divine Healing movement emerged at the same time as the New Thought movement and Christian Science appeared is not insignificant. Phineas Quimby (1809-66) developed ideas related to health, healing, abundance, prosperity, wealth and happiness. His ideas were preserved in New Thought and developed in Christian Science and sowed the seeds that gave birth to a new generation of evangelists preaching a gospel of prosperity. Particularly, the New Thought movement had a significant influence on E. W. Kenyon (1867–1948) who may be considered the father of twentieth century prosperity doctrine in Pentecostalism.