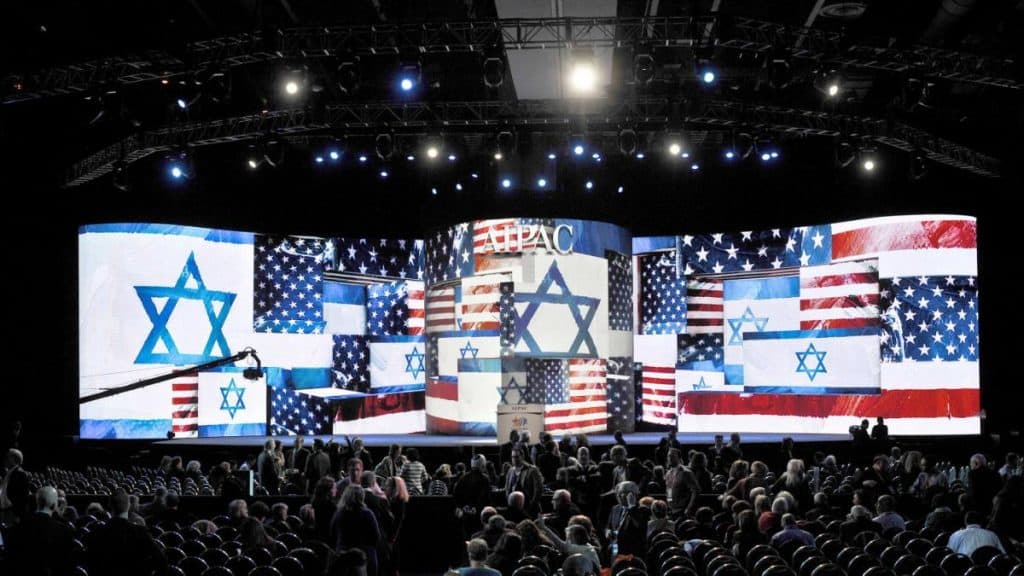 Ever had that mate who used to be cool but then got a crazy af gf who destroyed his confidence, drove his friends away and sucked out his life-force until he was a dry husk of a man at which point she left him for another target, broken, broke and humiliated?

Thank you for being a part of this holy endeavor and abiding by God’s mandate that we stand with His Chosen People.

May the God of Abraham, Isaac, and Jacob bless you for blessing Israel.@PastorJohnHagee pic.twitter.com/aBMwB4uTab

And while the crazy unstable vampire goth gf hasn’t dumped us for the Chinese bloke she’s been hanging around with just yet, we’re slowly waking up to the mind control.

A growing number of evangelical Christians across the West, whose adoration Israel and Jews more broadly have come to take for granted, are realising that this relationship isn’t good for anyone.

This relationship was always a one-way street.

We need a break up.

Some chubby vampire chicks are not happy about this at all.

A woman looked at me in a Pennsylvania church and said: “[Jews] say, ‘We’ve got America. We control America.’ “

I hope you’ll read this story, about the anti-Semitic beliefs of some evangelical Christians. It’s important. https://t.co/CwaO9iXuRZ

A smart and beautifully written argument by @chick_in_kiev. America’s intense fixation on Israel has far more to do with Christian influence than Jews. https://t.co/TV1QVmv51G 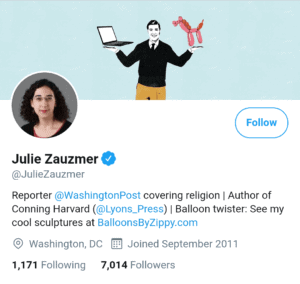 Julie also moonlights as a clown who makes balloons in her spare time. Here she is as a witch! 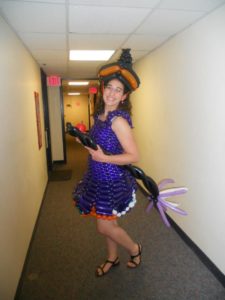 The memes just make themselves.

Despite the anti-Christian tropes spread by Julie in her Jewish supremacist terrorist hit piece on Christians who believe things she doesn’t like on far left blog The Washington Post, this break-up between evangelicals and Israel is only just getting started.

Understandably but regrettably, as part of the process, some Christians are getting angry.

For too long now, the postmodern church has been demoralised. Unable to push back against the onslaught of God haters in the media, academia and political class, Christians have retreated from engaging in public debates. We have shied away from stating unpopular truths which may lead to us being branded racist, sexist or homophobic. We have learned to police ourselves even in private because the cultural Marxists now totally control our public institutions.

As many Christians learn that cultural Marxism and Zionism are two wings of the same bird, they’re beginning to wake up.

Since the Second World War, the so-called Christian countries of the West have become the leading purveyors and distributors of pornography, debt slavery, vapid materialism, sexual depravity and military aggression around the world. Many Christians have become demoralised by how thoroughly we have lost the culture war, and how the leadership of the world by the Christian West could create such a cruel, unjust and depraved world system. We’ve been confused by how the same Holy Spirit which turned the world upside-down from the first century onward to restore the moral law of God in creation could now seem so impotent in the face of the onslaught of a world determined to entirely invert it again.

The Holy Spirit, though, hasn’t changed. God hasn’t changed. Jesus hasn’t changed. He warned us this time of deception would come just prior to His return. We allowed the doctrines of devils to creep into our pulpits, our worship songs and the annotations in our study Bibles. We mixed the old wine into the new; the leaven into the new batch of dough. We did exactly what Jesus warned us against and what Paul railed so hard in his epistles to prevent. We let what happened to ancient Israel under the Mosaic covenant happen to us as well, and it gave birth to a million abominations.

Now, as we wake up to the mind control we’ve been under for decades, there’s an opportunity to put the world rightside-up again.

Rather than fading away gently, Christianity is getting stronger. We’re not listening to the gaslighting from our accusers anymore.

24hrs later, but still exciting enough to post! Something for @GladysB to consider – the people don’t want laws that perpetuate cruelty against pain-capable and viable babies. #ProLife #KillTheBill pic.twitter.com/TOqCxk0oue

There are two core deceptions which have been perpetrated upon Christians since the early twentieth century with regard to Judaism and the state of Israel. The first has to do with what Judaism is. All my life, I’d been told that Judaism was basically the Old Testament. I even heard pastors teach that Judaism was based on the Torah, and that what Jesus condemned during his ministry was the addition of burdensome extra rules and regulations by the Pharisees.

It’s a lie. Jesus condemned the so-called ‘oral law of the rabbis’, which was an entirely different religion to the written law of Moses under the Mosaic covenant. The oral law of the rabbis, which was also called the ‘traditions of our fathers’, was a fusion of Canaanite blood magic with the mystery religion of Egypt and Babylon. It was a Satanic mystery cult which had been pushed underground during the reigns of the good kings of Israel but had flourished during the period of the exile in Babylon. It was after the return to Jerusalem begun under Cyrus in 539 BC that this religion became dominant among the Jews in Palestine, but it’s important to remember that this religion had always clothed itself in the language of the Torah as a shield against detection and persecution from the temple authorities. This tradition was carried forward into the Christian period, and when the rabbis wrote down the oral law in the Mishnah and the Gemara, which became the Babylonian Talmud, they were careful to maintain this cloak of Torah respectability. Jews today will say they ‘study Torah’ or ‘keep Torah’. They make a big deal about keeping a Torah scroll in their synagogues and Chabad Houses. 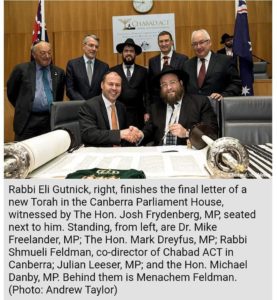 It’s bull****. They don’t read it and they don’t believe it. They follow the doctrines found in the Talmud and in Kabbalah, which are utterly Satanic, thinly veiled in the language of the Torah. From them have spawned the detestable practices of Western occultism, and the ideological subversion of Christian civilisation. 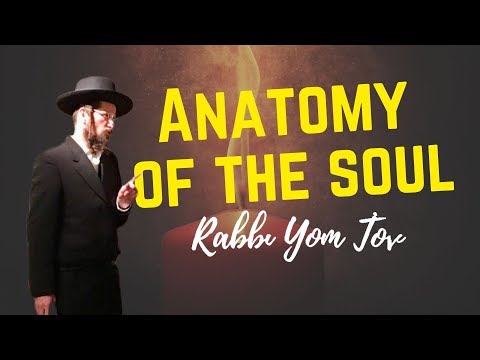 This is why Jesus hates Judaism. Catch the quote about 11 minutes into the rabbi’s spiel in the video above when he says that “Jews who forget Kabbalah start to feel like the average European, like a nothing”.

It’s useful to note that the same pattern occurred in ancient Israel as has happened in the Christian period. This Satanic mystery religion cloaked itself in the language of the Torah during the time of ancient Israel and after the destruction of Jerusalem in 70 AD when it was written down into the Talmud and, later, the Zohar. The same pattern has occurred during the Christian period. When we look into the secret societies spawned by Talmudic Judaism such as the Jesuits and the Freemasons, we see the same pattern of exoteric respectability and esoteric Satanism. Satan has no new tricks.

The mystery religion cloaks itself in the language of God’s Word to avoid detection. It becomes secret, or ‘occult’, until it is strong enough to come out into the light openly. Then it starts killing God’s people.

In my estimation, that point is not far off today. So what. Bring it. We Christians have had the end of the book revealed. We know who wins, and what happens to those who lose.

The second deception has to do with the promise of God to Abraham. As I’ve covered before, Christian Zionists have been deceived into believing that the promises God made to Abraham were a promise that the people who today call themselves Jews will again possess the Holy Land as part of God’s plan. It’s nonsense. Christian Zionists are told that the prophecy of Ezekiel 37:1-14 refers to God bringing the Jews back to Palestine after the Holocaust.

This is blasphemy. This belief states that God can have a relationship to an entire supposed race outside of their repentance and acceptance of Christ, and that God requires extra suffering and sacrifices after the cross for His plan to work out. That what Jesus did on the cross wasn’t enough.

And yet millions of evangelicals still believe it.

What America, and by extension Australia, will look like as this break-up happens is unclear. It may provide an opportunity for us finally to re-establish our society along the principles of justice and truth that we as a people hold to. We might finally be able to root out the dangerous and destructive utopian ideologies preached on our university campuses, and push pornography and sexual degeneracy back into the margins and into the shadows where they belong. It may be our renaissance.

Before this can happen, however, there will be terrible trouble for Christians. As Christians wake up from Zionism, which even President Trump seems determined to make happen with his preposterous tweets, this may spring the ultimate trap Satan has established for the church in the Last Days. The propaganda campaign against ‘white supremacist terrorists’ has already begun in earnest. It wouldn’t take too much tweaking to engineer a crackdown on Christians for the thoughtcrime of not wanting to worship Israel anymore.

The Muslims have already been stereotyped by the Zionists as terrorists. The legislation for the persecution of Christians is already there thanks to Israel’s war on terror.

What a bitter irony it would be that God might use our idol to discipline us for putting it before Him.

Teacher, writer, PhD. Published on the Daily Caller, Zero Hedge, Spectator Australia and XYZ. Anti-Marxist, anti-Zionist and fanatical truth-teller. Our struggle is not with flesh and blood but beware the leaven of the Pharisees.