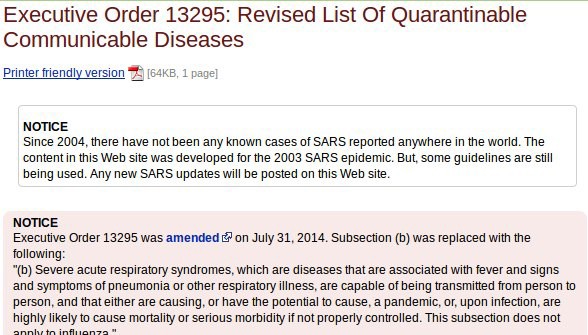 Looking for that Border Patrol report that states Fema is preparing for 200,000,000 million American deaths in the near future that Examiner published and deleted? 🙂 HERE IT IS! 😉

Red cross did indeed inject people who subsequently got “ebola” And they did it in a way that would be perfect for organ harvesting. Read it and weep Guidestone Group, this is yet another slam to your Ebola scam.

This is a new one for me folks, but President Bush laid the groundwork for Ebola quarantines in 2003, And it was amended on July 31 2014 to contain terms which will allow them to just nail anyone now, Ebola or not. Read it and weep folks!

The testimony of Ebola being delivered via injection in Africa is posted Here This testimony got banned on all the blogs and forums, IF ANYONE HAS THIS POSTED NOW, THEY ARE LEGIT. BANS WENT INTO PLACE IN MANY PLACES TO KEEP IT FROM GOING VIRAL.

Now on to that executive order, which is probably just as important: