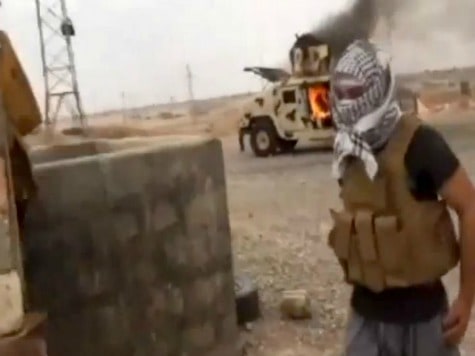 John Batchelor, our newest author on the Breitbart National Security vertical, and host of talk radio’s most strategic program on global affairs – WABC’s John Batchelor Show – has identified the Islamic State’s military plan for Baghdad, based upon an earlier Al Qaeda campaign document that the insurgency has updated after recent successes. This plan marks the next stage of the IS war to capture the Arabian peninsula.

Iraq and Syria no longer exist as sovereign states with international borders. Instead, the vast territory from the gates of Baghdad to the gates of Aleppo is in the hands of the revolutionary actors of the Islamic State.

The remnants of Iraq and Syria are being cut up and claimed by local powers in the ongoing civil war between the Turkish-led and Gulf State-funded Islamists of the Sunni majority and the Iranian-led, militant Shia minority.

The siege of Kobani is a straightforward step by the Islamic State to destroy the Kurdish citadel in northern Syria and secure its perimeter along the Turkish border.  The IS means to drive out or destroy all the minorities inside its territory: the Shia, Kurds, Alawites, Christians, Ismailis, Druze, Jews.  The Islamic State’s mission statement is to secure the Abode of Islam – the Muslim world – so that the only people inside the state are either takfiri jihadists or slaves.

Baghdad has also ceased to exist as an international capital.

Analysis by Bill Roggio of Long War Journal has identified an Al Qaeda-authored battle plan for the encirclement and destruction of the Baghdad that the IS looks to be following. A rough sketch of the plan was found on the body of the notorious Abu Musab al Zarqawi after he was slain by a US airstrike in June 2006.

The original plan divided a circle around Baghdad into five sectors.  Back in 2006, the ambition of the Islamic State of Iraq (a progenitor to today’s Islamic State) was to control all the gates of Baghdad in order to starve the city of resupply and to launch operations into the heart of the city.  Roggio reports that the Islamic State’s present war minister, Nasser al Din Allah Abu Suleiman, was once a member of the leadership obedient to Zarqawi.

However, there have been important alterations and updates in the original plan.  The mission isn’t about conquering Iraq anymore.  Now it is about conquering what the IS calls the Abode of Islam.

Earlier this year, the IS captured the eastern suburbs of Baghdad when it invaded Fallujah and the Baghdad suburb of Abu Ghraib, near Baghdad International Airport.  This put the IS within a few miles of the city center, threatening all the operations of the Iraqi army to protect the government.

The US is now obliged to use Apache helicopters in low-flight, high-risk operations to strike at the IS forces around the airport.

My information is that the IS no longer plans to encircle the city and reduce it to a burning citadel.  The Islamic State does not want the entire city; it wants only the Sunni portions.  The IS will leave the Shia neighborhoods and especially Sadr City in the hands of the Haider al-Abadi government and its Iranian allies.

Instead, the Islamic State will use its portion of Baghdad as a frontier post to mark the easternmost reach of its vast new territory carved out of the Sunni-occupied towns and tribes of the previous Iraq and Syria.

Once it secures its flanks, the Islamic State’s new mission will become the conquest of the Arabian peninsula and the capture of what the IS calls the Land of the Two Mosques, that is, Mecca and Medina and the Kingdom of Saudi Arabia.

Armed resistance to the IS army exists only along the borderlands.  For example, Iranians have major combat units inside Iraq to protect their border along now-Kurdish territory in the north of Iraq.

Turkey is looking to push a buffer zone into northern Syria in order to advance on the Assad regime – certainly not to rescue the Kurds, and surely not to combat its surrogate, the Islamic State.

The Hizballah Shia of Lebanon are holding fast in the Bekaa Valley even as they retreat in Syria from the onslaught of the IS and its allied Jabhat al-Nusrah.  The Assad regime has made Damascus a last ditch for the Alawite minority. The Israelis have clearly marked their boundary at the Golan Heights.

In all this turmoil, US airstrikes are ineffective, futile.  The Obama administration, in seeking to prop up the disorderly and dysfunctional Iraqi government, merely makes the IS message of imminent victory over the so-called crusaders more vivid to its recruiters in Europe, North Africa, and North America.