As you know, the elite attaches great importance to providing us with an external enemy: Huns, Nazis, Communists, Muslim Terrorists etc. It also creates internal enemies by dividing us on race, sex and class.

Thus, it diverts attention from itself, the real enemy, the elite organized in Freemasonry, an international satanic cult which controls our political, cultural and economic life with magical acumen. (See my “How They Control the World”)

Their smug victory symbols are everywhere: on the US Great Seal and the logos of countless corporations,the UN and even the city where I live, Winnipeg.

All  politicians who stand a chance are Masons including Bush, Obama, Clinton and McCain.  They don’t pose serious opposition. Bush has doubled the national debt and cut the value of the US dollar in half but do you hear him criticized for this?

On the international front, Bush and Ahmadinejad, Sarkozy, Merkel and Putin are all members of this club despite pretend disputes. They work for the international banking cartel, aided by a small army of dupes who may or may not be Masons but certainly know how to keep their high paying jobs.

World government, “the New World Order” is the goal of Freemasonry. It will be achieved by a “dialectical process” of phony wars and false flag operations, brainwashing (sensitivity training), propaganda, slander and coercion.

According to Jyri Lina’s book “Architects of Deception,” Freemasonry is Judaism for gentiles. It is based on the cabala and  is “the executive political organ of the Jewish financial elite.” (81-83)

Masonic Jews run it.  Apparently, Jews belong to all lodges but non-Jews can’t belong to Jewish ones like the B’nai Brith. These comprise the Executive Branch.

We are witnessing the culmination of a millennium-long crusade by certain Pharisaic Jews and their allies to overthrow Christian civilization and establish a primitive tyranny outlined in detail in The Protocols of Zion.

Juri Lina cites Professor Valeri Yemelyanov who told a Soviet Communist Party Congress in 1979: “the Jewish freemason pyramid controls 80% of the economy of the capitalist countries and 90-95 per cent of the  information media.” (163) (See also my “The Imperialism of Jewish Capital”)

In 1938, an insider Christian Rakovsky (Chaim Rakover)  described the situation as follows:

“In Moscow there is Communism: in New York capitalism. It is all the same as thesis and antithesis. Analyze both. Moscow is subjective Communism but [objectively] State capitalism. New York: Capitalism subjective, but Communism objective. A personal synthesis, truth: the Financial International, the Capitalist Communist one. ‘They.’ ”  They refers to the “Illuminati” the highest rung of Freemasonry.

The Masonic New World Order represents the translation  of an economic monopoly into a political, social and cultural monopoly.

On 19th Nov 1937 the influential Fabian Nicholas Murray Butler addressed a banquet in London with the words, “Communism is the instrument with which the financial world can topple national governments and then erect a world government with a world police and world money.”

WHAT DOES THE OVERTHROW OF CHRISTIAN CIVILIZATION MEAN?

The overthrow of Christian civilization means the end of mankind’s spiritual evolution and a gradual decline into an increasingly mean, pornographic, oppressive and violent world.

Christianity holds that human beings are made in the image of God ( i.e. have a divine soul)  and are one family. We have the potential  to evolve morally into better creatures living in a happier more harmonious society. God is Love and Love is the principle of human development. God is a real moral dimension (truth, love, justice, beauty and goodness.) The dire consequences of ignoring  ultimate reality should be apparent.

Let’s be very clear. We are under occult control. They are changing human nature, turning us into desperate, isolated, selfish and demonic creatures. They do this by destroying homogeneous nations with multiculturalism and invasion-by-migration. They are destroying families by brainwashing women to seek careers instead of families.

You can identify their agents as the dupes who want “to change the world.” They are making it worse. “Progressive” is defined by the Masonic agenda of world domination. They don’t realize that social programs are  bribes to put their agents into power.  Fed a diet of lies, trivia, sex and dysfunction, we are to be producers and consumers, debtors and drones– not human beings.

The pagan Masonic spell is cast with an amazing consistency and conformity through the mass media and education systems. For example, lately you cannot escape images of powerful women in male roles and exhortations to women in traditional societies to seek money and power.

In 1909, Paul Copin Albancelli wrote: “Masons repeat what they have heard from the preachers of the Occult Powers: the journalist ..the publisher..the pornographer…the professor…The state of mind created and filled in the lodges..is the profane medium met everywhere and the mind is altered by it. And as Freemasons perform this duty as propagandists without revealing themselves as Masons, the activity which they exert is not recognized as Masonic.” (“The Jewish Conspiracy Against the Christian World”  pp.173-174)

Freemasonry  shows a false face to the world. Lina writes that Freemasonry “is closely associated with socialism and communism, as well as with organized crime. The primary task of freemasonry is to combat knowledge of the real world and to ignore the facts from true history.” (281)

Exoteric Freemasonry is for the rubes. It is about charity and “making good men better” etc. The real Freemasonry, the esoteric (or occult) known to adepts, is about conquering the world for Lucifer.

Thus, we always must discern between the formal and the informal, the subjective and the objective.

Formally, we live in a free society. Informally our “leaders” are dupes and traitors dedicated to our ultimate enslavement.

Formally, we have a free press and education system. Informally, only those views that correspond to the occult (Masonic, “enlightenment”) agenda get a hearing.

Formally, art and  entertainment  are free expressions. Informally, with a few exceptions, only entertainment that advances the occult program will be encouraged. Countless movies fall under the category of predictive programming- teaching people to expect satanic scenarios and horrifying catastrophes.

Formally,  Muslim terrorists flew planes into the symbols of American freedom and prosperity on Sept. 11, causing them to collapse killing over 3000 people. Informally the instruments of the  Masonic financial elite–intelligence agencies, secret societies– detonated the buildings to justify gutting civil rights and starting a gratuitous war and $5 trillion boondoggle.

Formally, they believe in our country. Informally, they are doing everything they can to undermine it so the population will accept world government.

Formally, they are Christians. George Bush is a Christian. Informally, Luciferianism  (Freemasonry, Cabalist Judaism, secularism) is the religion of the post-Enlightenment West. George Bush is a Satanist who proudly uses the horned goat symbol.

Dupes are the overpaid people who maintain the “formal” and hoodwink the masses. This includes most  successful people in media, education and culture.

Right now, I’d say the most revealing book on our predicament  is Jyri Lina’s “Architects of Deception.”  I reviewed it once but I must commend it to you again. Here’s another example of the revelations it contains:

Most of George Washington’s generals and the signatories of the Declaration of Independence were Masons.  The values of the Declaration are valid but they fall under the category of the “formal.” Informally, Lina says: “The freemasons created the United States of America as an effective base for their world-encompassing activities and to attain their utmost aim-world supremacy.”

Our lives are built on a monstrous fraud. Our leaders are chosen by their willingness to betray us for fame and fortune..  Humanity has passed into a Twilight Zone between reality and an occult spell. Our only hope is for the “formal” to trump the “informal,” and for the dupes to realize that no one will flourish in the Dark Age. 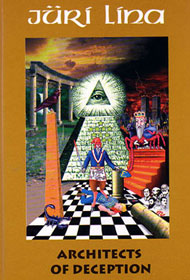 To order “Architects of Deception”  (I am not getting a commission) :