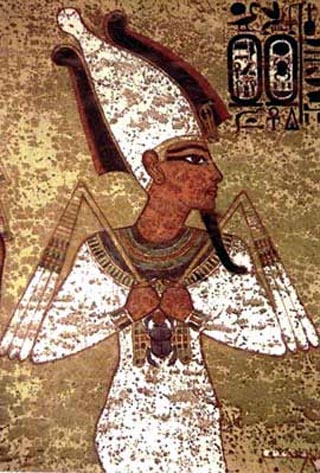 (left-Osirus, Egyptian God of the Underworld)

by Fritz Springmeier
(Excerpts from his unpublished book, “Wise as Serpents, Gentle as Doves”)

In the hard to obtain book, The Hidden Life In Freemasonry, written for Masons by 33rd degree Mason C.W. Leadbeater, one learns what the upper degrees of Freemasonry can get into…
First, we’ll discuss the 30-33 Scottish Rite degrees. This is where it becomes evident that Lucifer is the God of Masonry.

Leadbeater says, “It must of course be understood… the conferring of the Higher Degrees puts certain definite powers in the hands of the recipient.” Where does such power come from?

“The 33 degree links the Sovereign Grand Inspector General with the Spiritual King
of the World Himself–that Mightiest of Adepts who stands at the head of the Great White Lodge, in whose strong hands lie the destinies of earth–and awakens the powers of the Triple Spirit as far as they can yet be awakened.” (The Hidden Life In Freemasonry, p.302) Other Masons like Manly P. Hall (33°) and Foster Bailey (32°) have said similar things.

Foster Bailey calls the spirits that Masons communicate with the “Illuminati” These spirits initiate these higher Masons into becoming light-bearers themselves. The Illuminati…”assist at the unfolding of the consciousness of the candidate until the time comes when he can ‘enter into light’ and, in his turn become a light-bearer, one of the Illuminati who can assist the Lodge on High in bringing humanity to light.”

These spirits have various Masons. Masons Harold Waldwin Pecival and Lynn F. Perkins claim their books were inspired by spirits. Is 33° Mason Leadbeater talking about Christ?

“The H.O.A.T.F. makes the actual links both with Himself…and also through himself with that Mighty King…This stage combines the wonderful love of Horus the Son with the ineffable life and strength of Osiris the divine Father and Isis the eternal Mother of the world.” This initiation connects the Mason with the pagan Egyptian trinity? That’s what he says.

The next chapter “Two Wonderful Rituals” describes Egyptian rituals to Amen-Ra, and the Blazing Star. They sing a hymn to “Ra, the Logos, the Sun-God, thanking Him for His response…” They take a sacrament to Osirus.

The next ritual described may possibly refer to part of the secret Palladium Rite, as it refers to THE TRIANGLE OF ADEPTS. The Palladium Rite calls its groups Triangles. He talks about chanting invocations, and then angels appearing. Then the Illuminati salute is given to the Angel, where the left arm is placed above as if shielding one from light. (p. 341) Leadbeater indicates that eventually the Temple of the Angels draws 9 orders of angels, “which are not limited to one solar system.” (p. 342)

The Rite of Memphis is not just European. Americans, such as 6-term Governor of Wisconsin Lucius Fairchild who was 95°, are Memphis Rite Masons too. The Rite of Memphis has Ormus in their ritual. What or who is Ormus? Ormus (Ormudz) was the supreme God of Mithraism and Zoroastrian thought. It was also the name by which the Prieure de Sion allegedly went by from the years 1188-1306. In 1188, when the Ordre de Sion became the Prieure de Sion it took the subtitle Ormus, until just before the arrest of the Templar Knights’ leaders…..

There are numerous secret “interoffice memo type” papers that indicate that a Satanist, a Luciferian, a practitioner of black magic, or the like has a easy time in Freemasonry, because the upper degrees are controlled by men who will bend any rules to help them. Having a membership card is of limited value in visiting a foreign Lodge. A dues card is important, showing that one’s dues are all paid up. Certain questions will be asked, and certain parts
of the rituals need to be quoted by memory to satisfy the Lodge one is visiting.

FREEMASONRY HAS LOTS OF SPIN-OFFS 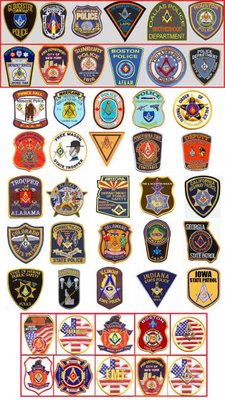 Freemasonry is “directly or indirectly the parent of all modern secret societies, good, bad, or indifferent.”–Cyclopedia of Fraternities. One outdated source indicates there are over 600
secret societies in the U.S. utilizing Masonic symbolism, and operating largely under Masonic influence, so that about every third male adult in the U.S. is a member of one or more such
societies. The 600 figure is outdated, and the actual number of secret societies has increased by several hundred.

Some of the Masonic spin-offs have become such a part of normal life that the negative reactions of past years toward them are forgotten. Rotary, because of its Masonic control, hostility toward the Catholic Church, and its moral code, “which in almost every particular resembles that of Freemasonry, ” was forbidden in some Catholic jurisdictions, and discouraged in others. That was back in the 19th and early 20th century.

The Palladium Rite created by Albert Pike is totally Luciferian. It is “androgynous.” In the larger cities, activities are carried out in the Masonic Temples, which allows women to slip into the
Temples without arousing attention. All of this will be strongly denied by the Masonic Lodges.

Members are selected mainly from higher levels of the Scottish Rite, although the members can come from other Rites too. The Palladium Rite has its own budget. Its power over the Masonic Lodge does not derive from being a part of the power structure, but from the careful selection of Masons that participate in the Palladium Rite and their distribution throughout
the various Rites of Masonry and their controlling bodies. The Grand Central Directories (and from there to the Supreme Councils, Grand Encampments, Grand Orients, and Grand Lodges) are the nerve centers of Masonry from which orders emanate. The Palladium Rite
is popular among those in positions of power. It is said that the leaders of the Palladium Rite are allowed to visit or join the B’nai B’rith lodges.

William Schnoebelen is presently a Christian author. Prior to becoming a Christian, he had been initiated into the Palladium Lodge in Chicago named Resurrection Lodge #13. He describes some about getting the Palladium Degree of Paladin in his recent book
Masonry- Beyond The Light. That lodge claimed to be derived from the European chapter of the AISB.(p. 186) Higher Masons become Illuminati– which go by several names one of which is “Masters of the Temple.” A single illumined person is called an Illuminatus.

This chapter has shown how Freemasonry is the One-World-Religion. Freemasonry has created hundreds of organizations.

Freemasonry itself is the pagan mystery religion, which at the highest level becomes Luciferian worship. It has quietly played the dominant political role in the United States even before independence.
—–
A Reader writes:
I wrote Fritz recently and received a letter back from him.  He will be getting out in 2011 but the FEDs are going to make his life a miserable hell.  He said they will tell everyone everywhere he goes that he is a threat because he is a terrorist.

He still has his head up and sounds strong.  He is busy teaching as one would expect and said he doesn’t have a lot of time to write.
Anyway, keep him in your prayers as his freedom comes close.