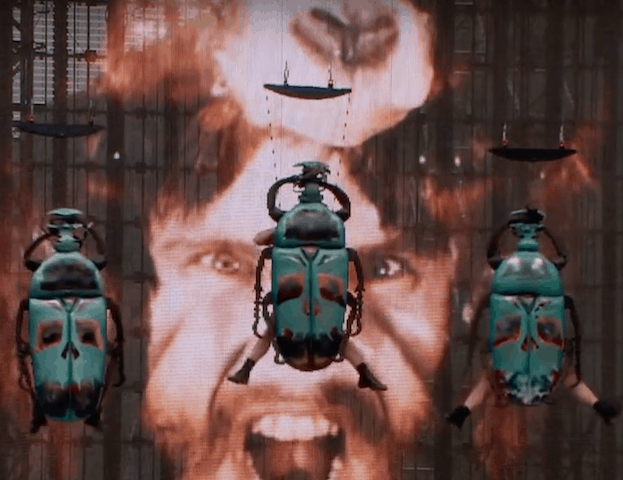 The Gotthard Train Tunnel ceremony/ritual was shockingly satanic. The fact that the media made light of it and the public is not up in arms is indicative of the rise in godlessness of our time. I am not a “Futurist,” meaning, I do not believe in the Dispensational view of a 7 year tribulation or a single man anti-christ. But we would have to be blind to miss the clear, exponential rise of in evil in the world. I believe that scripture would have us be aware of these things (2 Cor2:11), but we should not let them take our eyes off of Jesus, the author and finisher of our faith, the hope of glory to all who believe. It has never been more important to know what you believe, why you believe it, and to be ready to share the reason for your faith.

“For the eyes of the Lord are over the righteous, and his ears are open unto their prayers: but the face of the Lord is against them that do evil. And who is he that will harm you, if ye be followers of that which is good? But and if ye suffer for righteousness’ sake, happy are ye: and be not afraid of their terror, neither be troubled; But sanctify the Lord God in your hearts: and be ready always to give an answer to every man that asketh you a reason of the hope that is in you with meekness and fear:”  1 Peter 3:15 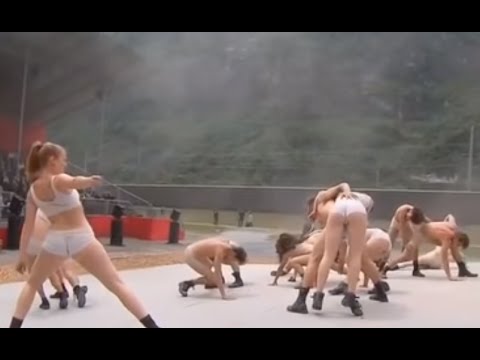 The Gotthard ritual was split into 2 separate events, one for elite dignitaries inside the tunnel and the other outside in Erstfeld for the thousands of public attendees. Both were laced with graphic demonic symbolism, and broadcast live across the world through RT, BBC and other major European outlets.

The indoor ceremony followed a similar, yet scaled down version, of the outdoor Erstfeld ritual, and was coordinated by German director Volker Hesse.

The ritual, dubbed by BBC as a “lavish performance” was originally intended to represent various aspects of Swiss culture. It included 600 dancers, acrobats and dramatic actors and cost CHF8.8 million ($8.9m). The performance began with a cohort of miners dressed in orange jump suits, marching like zombies toward the tunnels entrance (depicted on a video screen). The miners were then seemingly sacrificed to the tunnel and emerged as veiled spirits (represented by dancers in underwear with white wedding veils), and an actor dressed as a goat sprung out and began ritualistically consuming and mating with the veiled dancers. During this segment a headshot of the actor dressed as a goat was displayed on the video screen with a black and red backdrop and an absorbing fire lofting around his face, while three Egyptian scarabs floated in front of the screen. The next scene shifted to pagan druid ceremony, with the actors now draped in black subdued clothing and adorning nests, plants and trees on their heads. As the goat man laid on the floor an upside down tree was displayed on the video screen and the actors chanted a song in a mix of Ancient Germanic and Italian. The ceremony ends with the goat man being resurrected and worshipped as he is introduced to technology, industry and modern society — with many of the actors clothed as cross dressers, drifters and harlots.

The beginning portion, with the miners being sacrificed to the tunnel, is especially eery because nine workers —four Germans, three Italians, and one each from South Africa and Austria — died in accidents while the tunnel was under construction. Swiss media reported that their deaths are commemorated by a plaque dedicated to Saint Barbara — the patron saint of mining — near the northern end of the tunnel.

Who was Saint Barbara?

Saint Barbara was a 3rd century Christian martyr who was beheaded for her faith during the Roman occupation of Nicromedia. In the stories oldest form recounted by author C.E. Gregory, Saint Barbara was promised by her father Dioscuros to marry a very prosperous man with the goal of increasing their family fortune. At first Barbara asked for time to reflect. Following Dioscuros’ return from a long journey, Barbara explained to her father that she was a Christian and did not wish to marry. She had already removed the different images of Pagan gods from her living room quarters and had replaced them with crucifixes. Dioscuros, seeing that his only child had turned to the new religion and that he himself had been placed at a disadvantage, was overcome with rage. He handed over his daughter, as a Christian, to the Roman pro-consul Martianus, a Supreme Court judge, for the assessment of punishment.

Martianus tried at first by kind persuasion, to make her break with her faith; but when this failed, he had her thrashed and cast into jail. Due to the strength of her faith, her wounds healed immediately. On the following day, she was ordered by Martianus to pay sacrifice to the pagan gods. When she refused, she was mutilated in a dreadful way. When she continued to proclaim her Christian faith, she was sentenced to die by the sword. Barbara went to her place of execution in cheerful ecstasy: with her enthusiasm for her true faith. Her last wish was that God through her experience help all those confronted with and unprepared for a sudden untimely death. Dioscuros was so outraged that he himself severed his daughter’s head. Immediately following Barbara’s death, a terrible thunderstorm arose. As punishment for his monstrous crime, Dioscuros was killed by lightning.

There are many churches, mines and works of art named after or produced in remembrance of Saint Barbara, one example of note is the Barbara Cathedral in Kuttenberg (Bohemia), an area often referenced in association with the Bohemian Grove — a secret society related to freemasonry and satanism.

Below are examples of Saint Barbara shrines in the German mines Schacht Konrad (left) and Schacht Asse II (right). 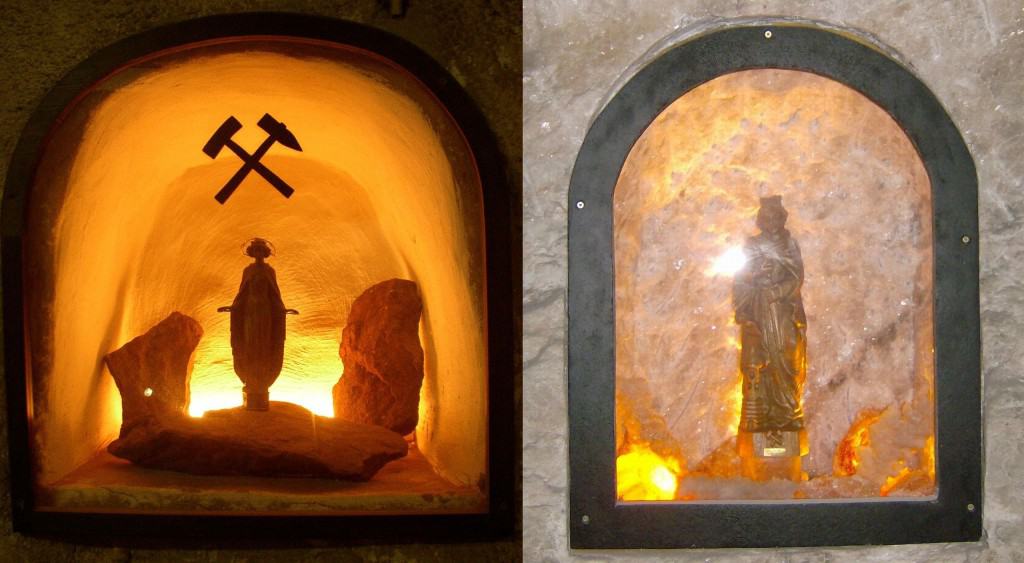 According to the article “Social Cohesion & the Bohemian Grove: The Power Elite at Summer Camp” written by G. William Domhoff, a Professor of Sociology at the University of California at Santa Cruz, many in the membership roster of a social club based in Santa Barbara named Rancheros Vistadores are listed among other globalist organizations as regular annual attendees at Bohemian Grove. The city of Santa Barbara in California was directly named after Saint Barbara of Nicromedia.

Could the inclusion of this alter in the Gotthard tunnel have deeper meaning? Could the New World Order be using this Saint as a convoluted symbol in their demonic agenda?

In addition to the inclusion of the Saint Barbara plaque, the Gottardo 2016 Organization Committee invited a distorted gaggle of ‘religious leaders’ to bless the tunnel. Leading the group as the appointed Religious Advisor, Father Martin Werlen was joined by Rabbi Marcel Yair Ebel of the Swiss Federation of Jewish Communities, Imam Bekim Alimi of the Federation of Islamic Organizations in Switzerland, Pieter Zeilstra the Head of the Safety Division of the Federal Office of Transport, and priest Somina Rauch.

The Gottardo 2016 Organization Committee said the congregation of clerics was formed to properly represent the three major monotheistic religions and the government official was included to represent the atheist population. In a plea reminiscent of Pope Francis’ one world religion initiatives, the organization’s goal with forming this interfaith coalition was to promote the message that “all of humanity are traveling together – irrespective of their religion,” noting specifically that “This [message] will be made visible in the inauguration.”

Known for their secluded gold vaults, the Swiss Mint took this event as an opportunity to launch a new gold and silver coin. Designed by Fredi Trumpi, the new 20-franc silver coin shows the tunnel’s north portal in Erstfeld, and the new 50-franc gold coin shows the tunnel’s south portal. This commemoration coin —which will likely circulate around the world — was created at a time when calls for a cashless society ring loud from globalist publications such as Bloomberg and the Economist, and major economic analyst’s such as Jim Rogers say precious metals are one of the only insurance plans against economic collapse.

Lastly, the June 1st ceremony was not the end to this demonic ritual. The Gottardo 2016 Organization Committee published online that the tunnel’s festivities will continue through June 4-5 , with the Friday and Saturday celebrations including up to 100,000 people, SputnikNews reported. With the parliamentary budget allocated for the Gotthard inauguration set for CHF12 million ($12.7m), and roughly CHF8.8 million ($8.9m) already spent on the opening bout, what will the event organizers use the remaining CHF3.2 million ($3.2m) for in the remaining ceremonies?

According to the Swiss rail service, it took 43,800 hours of non-stop work by 125 laborers rotating in three shifts to lay the tunnel’s slab track. The same type of circular drill was used to create the tunnel as was employed in the CERN project.

The rough design for a rail tunnel under the Gotthard Pass was first sketched by Swiss engineer Carl Eduard Gruner in 1947, but due to bureaucratic delays and concerns over the cost the start of construction was pushed back until 1999. The work took 17 years, at a total cost of more than 12 billion Swiss francs ($16.78 billion).

The number of daily rail passengers is expected to increase from the current rate of 9,000 people to 15,000 by 2020, 5.47mn yearly. Roughly 260 freight trains and 65 passenger trains will pass through the tunnel each day, amounting to 94,900 freight trains and 23,725 passenger trains yearly. This will increase the annual freight capacity from 20 million to about 50 million tonnes. Though officials from Swiss bank Credit Suisse said “its economic benefits will include the easier movement of goods and increased tourism,” this could easily be shifted to facilitate the transportation of muslim migrants into mainland Europe, a move that anti-immigration canton’s would not easily be able to track nor stop.

The region itself has a deep history and ideological significance to the character of Switzerland. The pass of the Schöllenen gorge, a critical point above the Gotthard Train Tunnel route, is known by the locals as the Devil’s Bridge. Accompanying this chilling name, is an intriguing folk tale from historian Meinrad Lienert which details how the people of Uri, Switzerland recruited the Devil for the difficult task of building a bridge across gorge. The Devil requested to receive the soul of the first thing to pass the bridge in exchange for his help. To trick the Devil, who expected to receive the soul of the first man to pass the bridge, the people of Uri sent across a goat by throwing a piece of bread, and the goat was promptly torn to pieces by the Devil.

Enraged at having been tricked the Devil went to fetch a large rock to smash the bridge. While taking a break from exhaustion from the task of carrying the rock back to the bridge, a Christian women secretly marked the rock with a cross. The Devil was then unable to pickup the rock, and was forced to abandon it and flee. This 12 m tall, 220 ton rock was named “The Devil’s Stone” (Teufelsstein),  and on 1 September 1972, the stone was moved 127 metres and is now situated on the ramp of exit 40 (Göschenen) of the motorway, at the entrance of Gotthard Road Tunnel.

As it turns out there are hundreds of “Devil’s Bridges” across the world, the most notable including:

France’s President Francois Hollande, Germany’s Chancellor Angela Merkel and Switzerland’s President Johann Schneider-Ammann look on after travelling through the Gotthard Rail Tunnel, the longest tunnel in the world, on its opening day, at the southern portal in Pollegio, Switzerland, June 1, 2016. REUTERS/Peter Klauzner/Pool
Read more at http://www.trunews.com/nwo-satanic-ritual-gotthard-tunnel/#p5BlWzX1L0EHsdmo.99