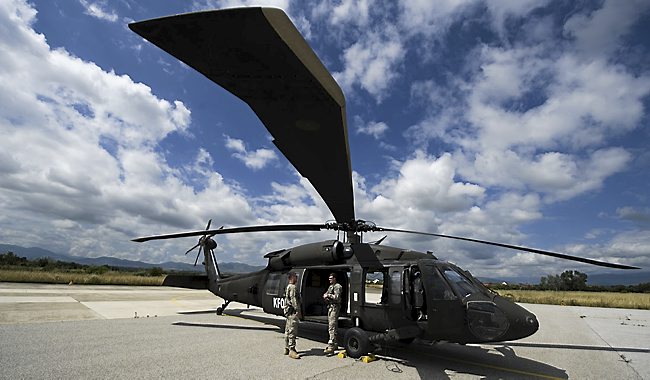 By Frederick Melo and Tad Vezner | Pioneer Press | 8/19/2014
Black Hawk helicopters, like this one on a U.S. peacekeeping mission in Kosovo, caused a stir when they were flown over Minneapolis and St. Paul on Monday night. (Armend Nimani/AFP/Getty Images)
RELATED STORIES

The copters are taking part in U.S. military exercises that will continue sporadically into Thursday evening — local law enforcement officials said — but now with a little more public notice.

“It’s something that we do 10 to 15 times a year throughout the country,” said Maj. Allen Hill, a spokesman for the unit — known as the “Night Stalkers” — based out of Fort Campbell, Ky.

“It provides our pilots an unfamiliar environment — an area they’re not accustomed to. Towns like Minneapolis, St. Paul, Dallas, Phoenix, Houston, they’re all great hosts,” Hill said. “The cities invite us.”

When they flew over the Twin Cities in 2012, St. Paul and Minneapolis police began notifying the public three days before the training ramped up. At the time, police said they didn’t want to tie up 911 centers with calls from alarmed residents.

This time, though, no such warning was made. And beginning about 7:30 p.m. Monday, about 200 callers clogged the Ramsey County Emergency Communications Center’s 911 and non-emergency phone lines.

A host of Highland Park and downtown St. Paul residents complained about the four-hour trainings, which were photographed and posted to social media by alarmed observers.

“We understand the concern and confusion these activities may have created for the public,” said St. Paul police spokesman Howie Padilla in a statement.

Tonya Tennessen, spokeswoman for St. Paul Mayor Chris Coleman, said the mayors of St. Paul and Minneapolis agreed months ago to host the exercises. This time, the military asked that unlike in 2012, Minneapolis police take the lead on communications.

“Going forward, the St. Paul Police Department and the city of St. Paul will take the lead in communications, just as we did in 2012,” said Tennessen, who otherwise defended the trainings.

“In a post-9/11 world, this is how homeland security happens. … These exercises are taking place in cities all over the country.”

At first blush Wednesday, some residents thought the seven or eight low-flying Black Hawk helicopters were crashing into their windows. Others said they spotted military personnel rappelling onto the top of the eight-story Federal Reserve Bank in downtown Minneapolis.

Hill, the 160th spokesman, said there was no rappelling. “I wasn’t sure where that came from,” he said.

Margie Kirk, who lives in St. Paul’s Macalester-Groveland neighborhood, said she spent the night worrying about what was happening above her head.

“The first thing I thought of is, there is some murderer in the area and we’re on lockdown,” Kirk said. “The next thought was we might have an orange alert, some terrorist problem at the airport. … I was left not knowing, and didn’t know until the morning paper.

“I am totally supportive of it … but there has to be a better way to handle it. We absolutely have to do things to keep us safe, but I think that was a very dangerous thing to do. I think they could’ve caused mass panic.”

Minneapolis police, who apologized Tuesday for any alarm or inconvenience the training might cause, said the department was working with the military to determine how much information it can release about the exercises’ schedule and locations.

The department cited the military’s security concerns, but nevertheless pledged to release at least limited information on its Twitter account at @mpd_pio.

Hill, the Army’s spokesman, said it’s typical for local police to give about 90 minutes advance notice to the public in order to avoid drawing crowds.

“The last thing we want is someone to be hurt, whether it’s as simple as a rock cracking a windshield, or something catastrophic,” Hill said.

“In the past, it became a spectator sport, and it became more trouble keeping the population at bay, because they wanted to get closer and closer. It’s a safety concern.”

“I think it’s outrageous,” he said. “We’re going to have Black Hawks flying at a low level over a densely populated urban area without any notice at all? I had helicopters shaking my house at 11:57 last night. They were right over the trees.”

“We need to talk about this in advance and openly,” Thune said. “Do we receive anything from the military for it? What is it, and how is it being used to enhance our civilian policing duties? It doesn’t seem like it’s very St. Paul to not be open about what we’re doing.”

St. Paul police have denied allegations that the Pentagon offered local police military equipment in exchange for their cooperation.

Police said the night training took months to coordinate and although local law enforcement agencies were not taking active part, they were in place to help with public safety concerns.

Dave Titus, president of the St. Paul Police Federation, said he was happy to see the military in his neighborhood.

“As a Ward 2 resident and St. Paul cop, I’m honored of the fact that our city leaders and police department in a small way assisted with making these soldiers mission ready,” Titus said.

“Controlled practices like these ultimately save lives and make a safer environment for everyone.”

This week is, coincidentally, U.S. Navy Week in Minnesota. The Leapfrogs — a Navy parachute stunt team — will jump onto the state Capitol grounds in St. Paul between 2:30 and 3:30 p.m. Wednesday.

Based in San Diego, the team consists of Navy SEALs and other members of the Special Warfare Commandos. The team recruits civilians and educates them about the benefits of joining the Navy.