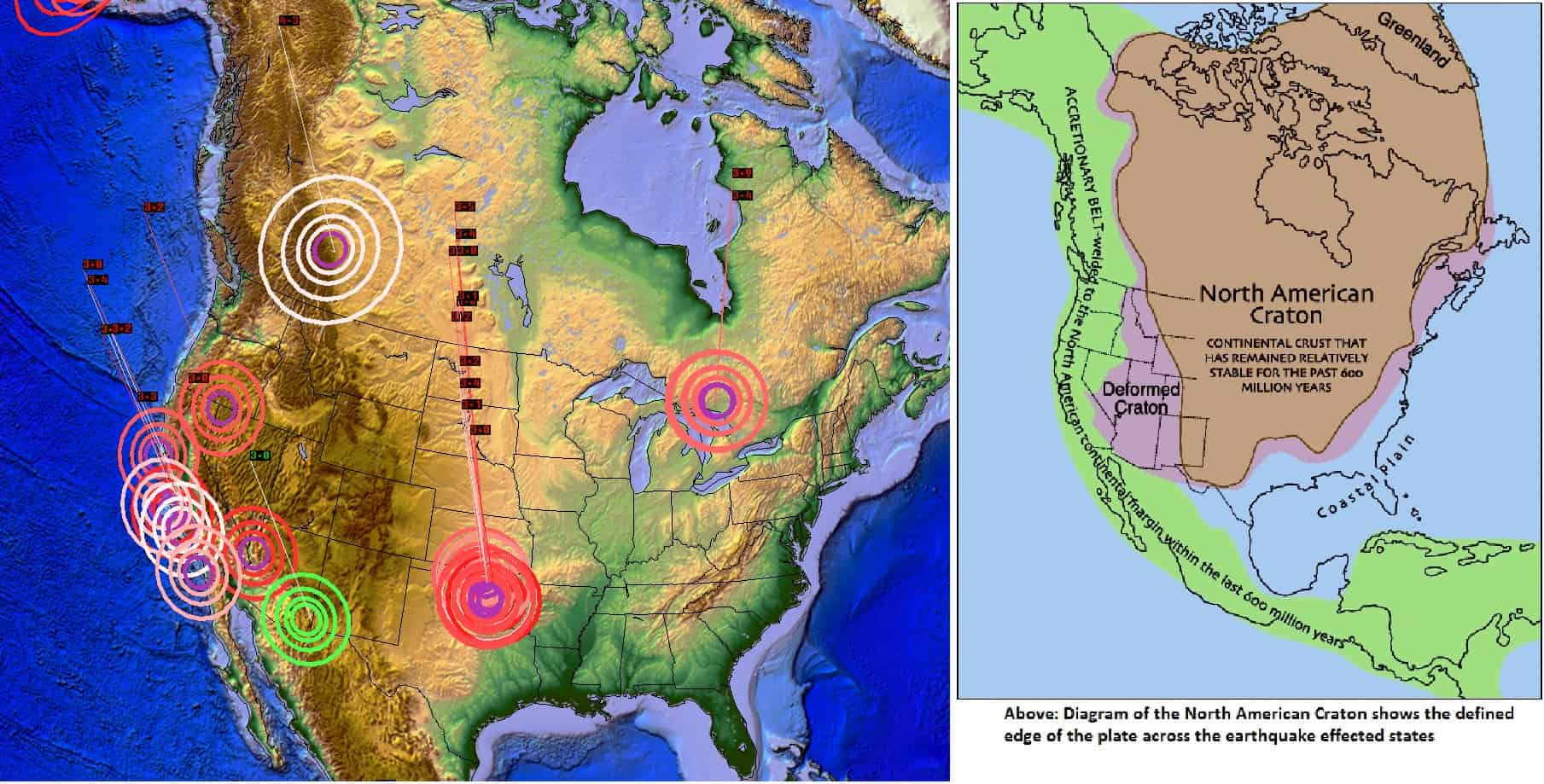 Right off the bat, its worthy to note the main stream media is running “prepare for the big one” news pieces in California.  This came into my news feed today:

Now that we’ve seen the main stream media making a generalized warning for the West Coast.  Let’s look closer at the recent activity, which indeed should be raising concerns at this point.

The North American Craton has experienced hefty movement over the past 72 hours.

The largest movement occurred along the South Central portion of the craton “edge” , at the fracking operations in Oklahoma.

A noteworthy 4.2 magnitude occurred just a few hundred feet away from the nearest injection well.

Also, the movement in Arizona (at the New Mexico border) as well, as the movement at the Nevada / Oregon border, are both volcanic related:

I covered the Arizona / New Mexico dormant volcano earthquakes when they first began, no one even payed attention at the time…

This above seen Arizona location had a large earthquake in June.  Again, most people didn’t pay attention at the time… however I fully documented the event here.

The location at the Nevada / Oregon border is another example of a dormant volcano showing signs of activity:

Expect some form of larger earthquake either to the far Northwest tip of the craton in British Columbia, or to the far Southwest tip near Salton Sea.

Also, watch Yellowstone / Idaho. With all the other movement in the 3.0M+ range, we’ve got to expect some compensation along the direct edge of the craton, at the Yellowstone weak point.

New Madrid, and East Coast…. be on watch. What size movement? Possibly larger than usual. Normally we see a few mid 2.0M events occur (as compensation movement) after this kind of seismic activity in the South and West.

In otherwords, watch the perimeter edge of the craton in the near term for possible noteworthy movement.

Its a large area to watch, but the signs of stress are there. Indeed, Nevada / Oregon, California, Arizona, and Oklahoma show major activity in the past 72 hours.

Monitor earthquakes via the links here:

In other news, in Iceland, a “supervolcano” located beneath a glacier in Iceland is showing major signs of activity, multiple hundred earthquakes in a short amount of time, occurring at a shallow level near the Caldera.

Professionals have raised the alert level to Orange, but are saying no threat of eruption is imminent (yet).

The Bardarbunga Volcano stands to cause serious problems in the Northern Hemisphere if it erupts.  Air travel being one of the many things to be effected, if this volcano erupts any time soon.

Like previous eruptions in Iceland, as with the 2010 eruption of Eyjafjallajokull, ash clouds can lead to serious problems thousands of miles away from the eruption itself.

“The world’s airline industry is on alert after Icelandic authorities have raised the alarm over a sudden flurry of small earthquakes that could cause one of the country’s largest volcanoes to erupt.

The Icelandic Meteorological Office warned Tuesday it has detected more than 3,000 minor earthquakes since Saturday along a fault line in the country’s centre.

Much of the activity is clustered around Bardarbunga — a subglacial stratovolcano under Iceland’s largest glacier. “Several of these events were larger than magnitude 3,” the office warns, with one touching 4.5 on the Richter scale — the strongest in that region since 1996 — although none has been that strong in the past 24 hours.

Although seismic activity in Iceland is routine, the sudden increase in number and intensity has volcanologists worried, because the last time similar activity was seen was in April 2010, when Eyjafjallajokull eruptedand the plume of ash and smoke grounded transatlantic air travel for the better part of a month.

Seismologists say magma is moving horizontally, not yet vertically, and “no signs of migration towards the surface or any other signs of imminent or ongoing volcanic activity have been detected so far.”

However, the aviation alert level has been raised to the second-most severe level as a precaution.

“Presently there are no signs of eruption, but it cannot be excluded that the current activity will result in an explosive subglacial eruption, leading to an outburst flood … and ash emission,” the office said.”