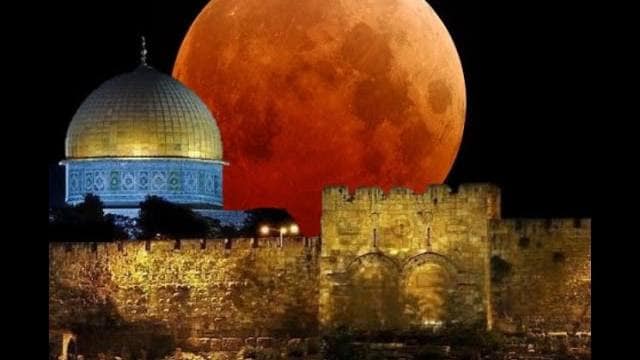 MUST SEE! Are You Ready for a Never Seen Before Event? Oct. 8 2014 Blood Red Moon and the Third Temple.

Folks, we are about to witness something that the ancients longed to live to see. For more on the blood moon and its Biblical connection to Jewish feasts and the end of days click here and here.

Concerning the new book Cauldron: Supernatural Implications of the Current Middle East, let me say from the outset that it’s been a long time since I felt so strongly that people purchase, read, re-read, study and then share a particular book, and to do so with a sense of urgency. This is because, with recent developments throughout the Middle East and especially those surrounding Israel, I have increasingly felt as a publisher that somebody (with qualifications to do so) needed to put into clear perspective for the rest of us the ramifications of what is currently unfolding in light of Bible prophecy. As I have spoken with the world’s most respected prophecy scholars over the past 12 months, I have learned that, to a person, there is a heightened sense of belief that global events not only seem torn from the pages of apocalyptic literature but truly are those foreseen by Scripture (the signs of the end times) and that they are now coming together with such precision and speed that it has several well-known Christian leaders beside themselves.

“Something is in the wind,” they say, pointing to such developments as the recent call by Jewish leaders (even in the Knesset, the legislative branch of the Israeli government) to build the Third Temple in Jerusalem; a simultaneous effort by the United States to push Israel into a peace agreement this year; political and religious leaders advocating for a single global, financial, and political authority; and even what now appears to be intentional movement by global powers that could initiate the battle of Armageddon. Please understand that within the degrading relationship and saber rattling between the United States, Russia, the European Union, and China exist the very components necessary for the final global conflict, called in Ezekiel 38 “the battle of Gog and Magog.” Ezekiel foresaw this supernatural contest occurring in the latter times after Israel would be “gathered out of many people and nations” and recognized as a nation once again. During that generation in which Israel is so reunified—which was accomplished in 1948—the Battle of Gog and Magog occurs. But if a biblical generation is approximately seventy years (see Psalms 90:10, Daniel 9) and if seven years is also needed for a coming “Peace” plan (called a “covenant” in the book of Daniel) to be enforced upon Israel, counting forward from 1948 seems to indicate these decisive events leading to the Great Tribulation and “battle of Armageddon” have already started their countdown. Ezekiel even tells us who the instigators of the battle will be—Iran (Persia), which becomes the number-one confederate with Russia (Gog) in this invasion of Israel: Read more

Are you prepared? Ever-ready?

For the video Anita made just prior to the one above:  World Headline News with Evangelist Anita Fuentes