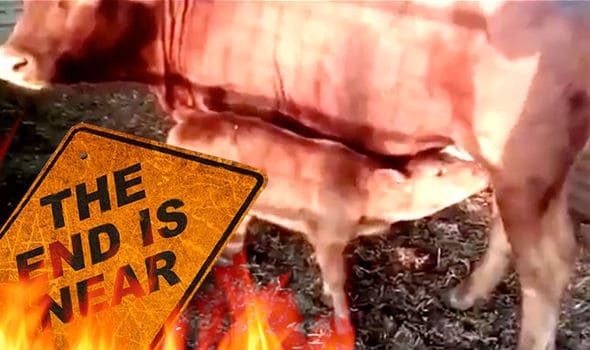 Last year, they built an underground Synagogue under the Temple Mount. Now there are strange, increasingly supernatural events surrounding the Temple Mount. Keep in mind when reading the following two articles, that you are reading their END TIMES SCRIPT, a twisted/PHYSICAL interpretation of prophecy.

Everything we’re seeing with Israel serves ONE PURPOSE:

TO ATTEMPT TO DECEIVE THE ELECT.

On that day, He will set His feet on the Mount of Olives, near Yerushalayimon the east; and the Mount of Olives shall split across from east to west, and one part of the Mount shall shift to the north and the other to the south, a huge gorge. Zechariah 14:4 (The Israel Bible™)

There’s been a lot of strange phenomena at the Temple Mount recently, including large sections of the ancient stones suddenly falling away, a mysterious mist around the Dome of the Rock, a snake crawling out from between the rocks. Now a sinkhole has appeared adjacent to the Gate of Mercy.

Jewish visitation to the Temple Mount is severely limited and the sections of the compound which Jews are permitted to visit are likewise restricted. As such, changes that occur on site are not always immediately noticed.

Though the Temple Mount is a bit removed from the geologically active Jordan Rift, a pre-Messiah earthquake is prophesied to drastically change the topography of Jerusalem.

On that day, He will set His feet on the Mount of Olives, near Yerushalayim on the east; and the Mount of Olives shall split across from east to west, and one part of the Mount shall shift to the north and the other to the south, a huge gorge. Zechariah 14:4

It may be that this dramatic geologic development has already begun. About one month ago, Jews going up to the Temple Mount began to notice a change in the sidewalk adjacent to the area of the stairs going down to Sha’ar HaRachamim (the Gate of Mercy), or Golden Gate as it is known in Christian literature. The sidewalk had sunk visibly and the was cracking as if the ground was opening up underneath the paving stones.

The location is highly significant. The gate is described in the prophecy as the gate through which the“Shekhinah (Divine Presence)” (quotations- CO) used to appear and will appear again when the Anointed One (Messiah) comes to enter the Third Temple.

And Hashem said to me: This gate is to be kept shut and is not to be opened! No one shall enter by it because Hashem, the God of Yisrael, has entered by it; therefore it shall remain shut. Only the prince may sit in it and eat bread before Hashem, since he is a prince; he shall enter by way of the vestibule of the gate, and shall depart by the same way. Ezekiel 44:2-3

The gate was sealed by the Muslims in 810 CE, opened by the Crusaders in 1102 CE, and sealed again by Suleiman in 1541 CE. It has been conjectured by scholars that the motivation for sealing the gate was a Muslim attempt to prevent the arrival of the Messiah.

Rabbi Yosef Berger, rabbi of King David’s Tomb on Mount Zion and a member of the nascent Sanhedrin, believes he may have had a hand in the recent underground activities leading to the sinking sidewalk.

“Just before Rosh Hashanah (the Jewish New Year), the Sanhedrin stood outside the Sha’ar HaRachamim and blew shofars,” Rabbi Berger told Breaking Israel News. “We wanted to do something, anything, to help bring geula (redemption) closer. The connection between the Temple Mount and the Jewish people is a strong connection, like between a husband and wife. Perhaps the mountain heard us.”

Rabbi Berger explained that the spiritual effort was deeply moving, for the Sanhedrin and perhaps for the mountain as well, but it was not especially pleasant. In addition to sealing the gate, the Muslims have established a cemetery in front of the gate in an attempt to prevent the Messiah from entering.

Of course, it may be that the broken flagstones are the result of less spiritual developments.

“The level that we now walk on is several meters above what was ground level in Temple Times,” Yaakov Hayman, chairman of the United Temple Movements, told Breaking Israel News. “It is all landfill. No one knows what is underground.”

Unfortunate political realities make it unlikely that any real knowledge of what lies underground will ever be known. This was epitomized by the wanton destruction caused when the Waqf built the El-Marwani Mosque in the so-called Solomon’s Stables located in the southeastern corner of the Temple Mount.

In the early 1990’s. Chief Sephardi Rabbi Mordechai Eliyahu began to advocate the construction of a synagogue on the Temple Mount in Solomon’s Stables. The large underground space, constructed by King Herod, was empty.

A remarkable new synagogue within the Western Wall tunnels complex that took 12 years to build was dedicated and opened on Monday night, following the traditional Hanukka candle-lighting ceremony in the Western Wall plaza. read more

“Shekinah“, the word used by the author of the article is the Kabbalist description of the Divine Feminine. It is the Kundalini Serpent spirit they’re having ritual sex with when they’re doing their perverse & depraved davening, or “humping air” in front of the Wailing Wall.

These liars are teaching that the earthquake comes BEFORE the arrival of their messiah, which is interesting to say the least. It’s enough to make you speculate about a HAARP engineered earthquake in Jerusalem in the near future… Scripturally this earthquake occurs AT HIS RETURN & our Enemy & his children are WELL aware of what Revelation says in regards to this. 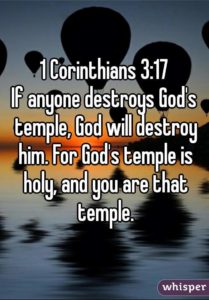 THE SCRIPTURAL TEMPLE OF GOD

Let’s take a look at the Temple of God so we can come together in understanding of what it is & what Revelation 11 is describing for us.

The Temple is a picture of how Man is created in God’s Image & likeness as well as a picture of the threefold nature of our Father & the ultimate relationship with His Creations that has been His intention from the Beginning.

As the Father, Son & Holy Spirit are mirrored in the Holy of Holies, the Holy Place & the Courtyard, Man consists of Body, Soul & Spirit.

Matthew 28:19
“Go therefore and make disciples of all the nations, baptizing them in the name of the Father and the Son and the Holy Spirit . . .”

Luke 3:22
“And the Holy Spirit descended upon Him [Jesus] in bodily form like a dove, and a voice came out of heaven, “You are My [the Father’s] beloved Son, in You I am well-pleased.””

John 14:26
“But the Helper, the Holy Spirit, whom the Father will send in My [Jesus’] name, He will teach you all things, and bring to your remembrance all that I said to you.”

Man in His Image

I pray God your whole spirit and soul and body be preserved blameless unto the coming of our Lord Jesus Christ (1 Thessalonians 5:23).

“For the word of God is quick, and powerful, and sharper than any two edged sword, piercing even to the dividing asunder of soul and spirit, and of the joints and marrow (body), and is a discerner of the thoughts and intents of the heart.” Hebrews 4:12

Scripture also clearly tells us the Man is the True Temple of God, the 1st & 2nd Temple buildings were just a guideline & place holder, an essential part of the 1st Covenant & law of Moses & like that Covenant & law were designed to pass away at the arrival of the Perfected 2nd Covenant, Jesus Christ, through whom the True Temple of God was founded & we washed clean & made a kingdom of priests & kings, a Royal priesthood in HIM with Him as our High Priest before the Throne of God.

Psalm 118:22
“The stone which the builders rejected Has become the chief corner stone.”

1 Peter 2:4-10
“As you come to him, the living Stone—rejected by humans but chosen by God and precious to him— 5 you also, like living stones, are being built into a spiritual house to be a holy priesthood, offering spiritual sacrifices acceptable to God through Jesus Christ. 6 For in Scripture it says:

“See, I lay a stone in Zion,
a chosen and precious cornerstone,
and the one who trusts in him
will never be put to shame.”
7 Now to you who believe, this stone is precious. But to those who do not believe,

“The stone the builders rejected
has become the cornerstone,”
8 and,

“A stone that causes people to stumble
and a rock that makes them fall.”

They stumble because they disobey the message—which is also what they were destined for.

9 But you are a chosen people, a royal priesthood, a holy nation, God’s special possession, that you may declare the praises of him who called you out of darkness into his wonderful light. 10 Once you were not a people, but now you are the people of God; once you had not received mercy, but now you have received mercy.

Ephesians 2:11-22
“11 Therefore remember that at one time you Gentiles in the flesh, called “the uncircumcision” by what is called the circumcision, which is made in the flesh by hands— 12 remember that you were at that time separated from Christ, alienated from the commonwealth of Israel and strangers to the covenants of promise, having no hope and without God in the world. 13 But now in Christ Jesus you who once were far off have been brought near by the blood of Christ. 14 For he himself is our peace, who has made us both one and has broken down in his flesh the dividing wall of hostility 15 by abolishing the law of commandments expressed in ordinances, that he might create in himself one new man in place of the two, so making peace, 16 and might reconcile us both to God in one body through the cross, thereby killing the hostility. 17 And he came and preached peace to you who were far off and peace to those who were near. [**18 For through him we both have access in one Spirit to the Father. 19 So then you are no longer strangers and aliens, but you are fellow citizens with the saints and members of the household of God, 20 built on the foundation of the apostles and prophets, Christ Jesus himself being the cornerstone, 21 in whom the whole structure, being joined together, grows into a holy temple in the Lord. 22 In him you also are being built together into a dwelling place for God by the Spirit.**]

Now, let’s read Revelation 11:1-3 with all of the above Scripture & explanation in mind….

Revelation 11:1-3
“Then I was given a measuring rod like a staff, and I was told, “Rise and measure the temple of God and the altar and those who worship there, 2 but do not measure the court outside the temple; leave that out, for it is given over to the nations, and they will trample the holy city for forty-two months. 3 And I will grant authority to my two witnesses, and they will prophesy for 1,260 days, clothed in sackcloth.”

The measuring of the Temple is the picture of the utter, emphatic completion of His children, ALL the individual bricks which are each of His children & their Soul & Spirit is the Temple itself containing the Holy of Holies where He dwells in our hearts, the Altar where we serve & the Courtyard is our Flesh bodies given over to the Gentiles, living in the Great Tribulation that we must Physically walk with Him through in willingness to lay down that FLESH into Death, knowing that we ALREADY LIVE in Him & His Kingdom in Heaven.