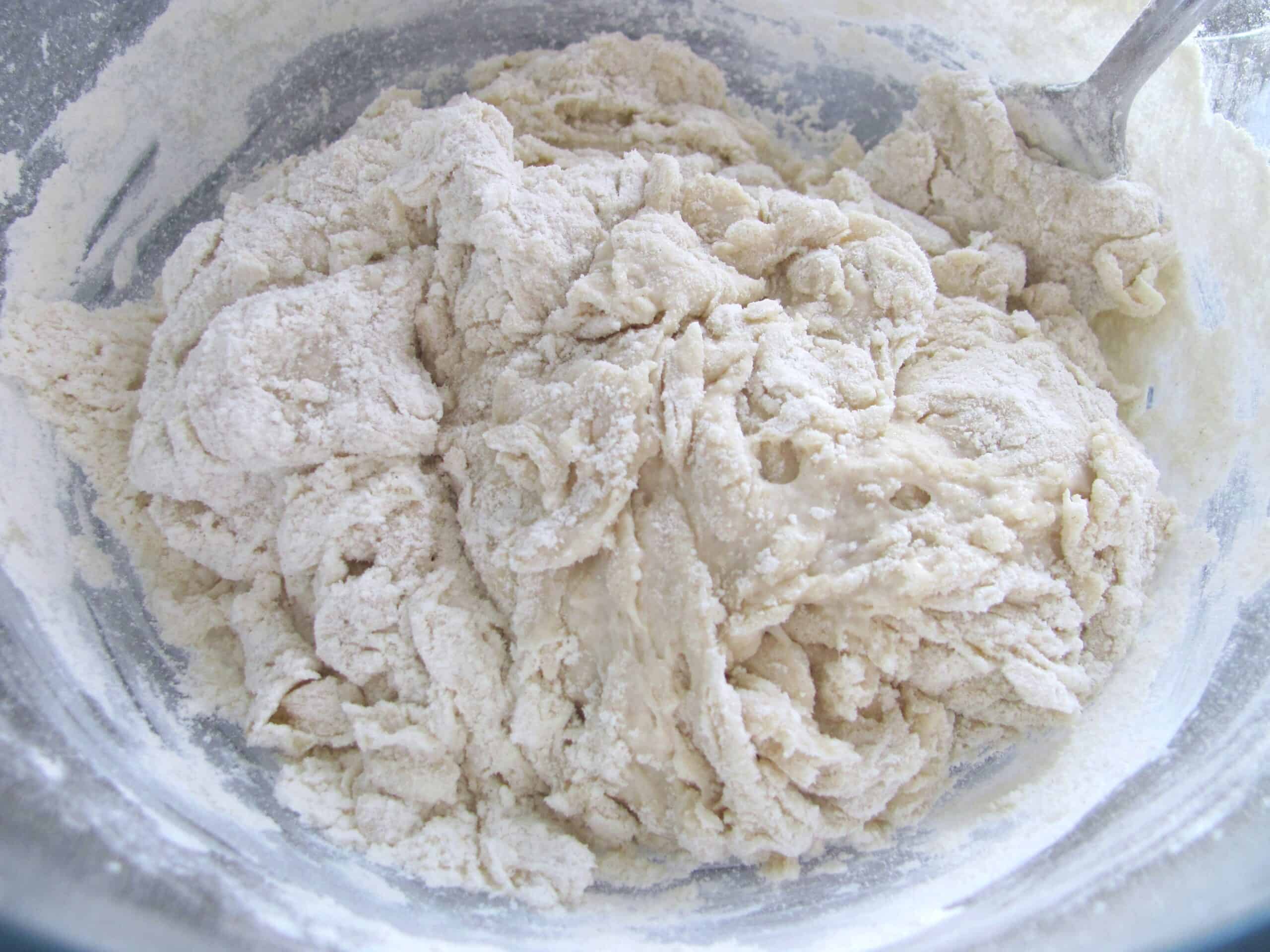 There’s a trend I’m seeing that concerns me. A couple weeks ago, Youtuber E511 made a connection between those holding to Covenant Theology (erroneously calling it “Replacement Theology”) and the NAR. 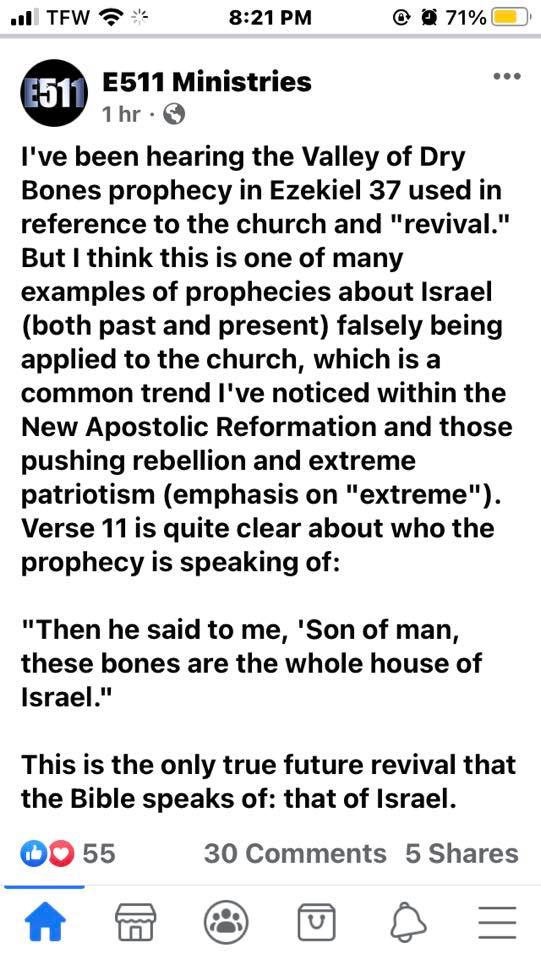 I thought to myself, “Now, how on earth can he be making that connection?” And I found this article falsely claiming the same thing on a site called “truthkeepers”:

RT posits the claim that the New Testament covenant replaces the Abrahamic covenant, and that the Church has replaced Israel as God’s chosen people. Thus, the Church is now “Israel” in the plan, purpose, and promises of God. In RT the promises that God made to Israel are spiritualized and every mention of Israel in the New Testament after Pentecost refers to the Church. Further, RT included beliefs based primarily on the notion that the Abrahamic Covenant no longer applies that promises Israel eternal ownership of land in Canaan (Genesis 17:7-8). Thus, because the Covenant no longer applies, Israel is just as any other nation and her only hope is in the Church…

I’ve said many times that the greatest deception of all that satan has pulled on the church (body not building) is to distort/convolute the gospel, robbing believers of their true identity in Christ. Brothers and sisters, without this we are lost; the miracle of our LITERAL PROFOUND NEW LIFE IN THE SPIRIT demoted to an “upgrade” in consciousness, at best. Here, (Reformed) Heidelberg blog delineates between New Covenant theology and “replacement theology”:

First, the very category of “replacement” is foreign to Reformed theology because it assumes a dispensational, Israeleo-centric way of thinking. It assumes that the temporary, national people was, in fact, intended to be the permanent arrangement. Such a way of thinking is contrary to the promise in Gen. 3:15. The promise was that there would be a Savior. The national people was only a means to that end, not an end in itself. According to Paul in Ephesians 2:11-22, in Christ the dividing wall has been destroyed. It cannot be rebuilt. The two peoples (Jews and Gentiles) have been made one in Christ. Among those who are united to Christ by grace alone, through faith alone, there is no Jew nor Gentile (Rom. 10:12; Gal. 3:28; Col. 3:11)… read more

To further my concern, yesterday Mike, from On Point Preparedness posted this video refuting the New Covenant view of Christ’s present kingdom reign on earth. (I’ve cued the video to the topic.) 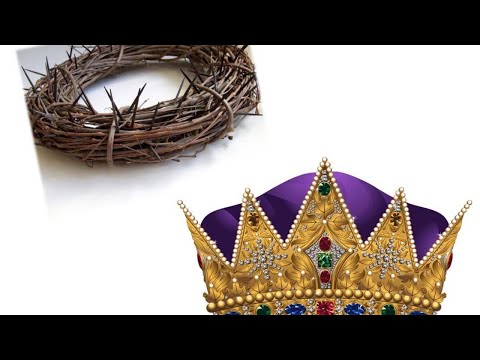 I’m disheartened to see Mike, who I’ve respected for his sound doctrine, espousing the relatively new (1800’s) Zionist/Dispensational view on the millennial reign of Christ. From the excellent article “The Throne of David,” Ron Graham contrasts this view with scripture:

From the statement by premillennialist Hal Lindsey we can see that the premillennial teaching has Christ, after his return, setting up a thousand year kingdom of God on earth. It is claimed that Christ will rule from the throne of David at Jerusalem.

“Most ministers and religious leaders today reject even the possibility that Christ will establish an actual physical kingdom of God on earth. Many who believe in a personal return of Christ reject that he will establish a thousand year kingdom of God and rule mortals from the throne of David out of Jerusalem after his return” – Hal Lindsey, ‘The Late Great Planet Earth’, chapter 13.

“God raised Christ from the dead and seated him at his right hand in the heavenly realm, far above all rule and authority and power and dominion, and every name that is named, not only in this age, but also in the one to come, and he put all things under his feet in subjection, and gave him headship over all things to the church which is his body, the fulness of him who fills all in all” (Ephesians 1:19-23) – I highly recommend that you READ MORE…

Back in September I wrote about The Return event, spearheaded by Zionist Franklin Graham and featuring Zionist/Kabbalist Jonathan Cahn (con) and NAR leader Kent Christmas, and have mentioned several times that I see the movement behind it being the heretical antichrist church. I did not expect this twist, but I shouldn’t be surprised.

Where is this all going?

As always, in their Hegelian method, and as I wrote in my article “Kabbalah vs. Kabbalah, will the Real New World Order Please Stand Up” in yet another “layer” of deception, they’re once again playing both sides. Their goal being the destruction of Edom (Christianity) as Alice Bailey disclosed and as Deanne Loper, quoting Rabbi Michael Higger wrote in her book, Kabbalah Secrets Christians Need to Know;

“Only those who are convinced of Israel’s divine purpose in the world, will be welcome to join Israel in the upbuilding of an ideally spiritual life on earth. Israel, the ideal, righteous people, will thus become spiritually the masters of the world… Dogmatic Christianity will be gone…traditional Edom and Rome… will disappear from the earth” – Kabbala Secrets Christians Need to Know (p 130)

Did you see that? “Rome.” Those who see the pope as the antichrist need to look deeper. If you haven’t picked up Deanne’s book yet, I strongly encourage you to do so. There’s a link to it in the sidebar.

Not so surprisingly, Christians are also being painted as “extremists” after the Washington D.C. false flag “riot.” With the NAR’s Dominionist adamancy to take over the world for Jesus, this is NOT a group I want to be “lumped” together with.

Brothers and sisters, be sure you are grounded in the Word and have a solid understanding of your identity in Christ and the spiritual nature of His kingdom.

Let us hold fast the confession of our hope without wavering, for He who promised is faithful. Hebrews 10:23