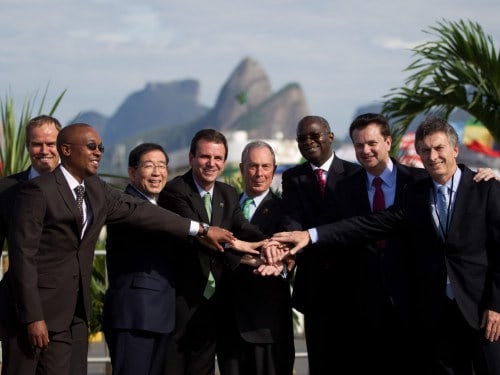 In its 2010 review of grants extended from 2005 to 2010, the Rockefeller Brothers Fund admits to buying off (quite literally) so-called “non-green voices”- meaning people outside the environmental community- to sell man-made climate change doctrine to their respective communities.

This is an actual admission by the Rockefeller Brothers Fund of sustained funding for specific segments to promote the “green” cause. In the document we read that both religious leaders and state/local politicians have been subsidized into selling the myth of man made global warming The report goes on to say that:

“Foundations, including the RBF, have played a significant role in building the capacity of these groups to organize their base members, communicate publicly about their interest in climate solutions, and advocate for policies that will address climate change domestically and internationally. In addition to its direct financial support of these individual groups, the Fund has also provided technical assistance for strategic development, communications planning, and advocacy training.”

Specifically mentioning the National Board of Governors as beneficiaries, we read:

“Governors and mayors have proven to be very effective advocates for climate change solutions domestically and internationally. Across America, states and localities are developing innovative climate programs and serving as laboratories for pioneering approaches. Many have launched climate initiatives in their cities and states and have seen the economic benefits of doing so.”

The review also describes in some detail how the Fund from 1984 onward has poured bucket loads of cash into climate change propaganda-efforts, including strengthening the implementation of Agenda 21 up to and exceeding the 1992 Earth Summit:

“Two strategies underpinned this phase of grantmaking: 1) distilling consensus on climate science and, 2) moving the discussion of climate change from the scientific community into the policy arena. (…) The RBF organized and funded some of the earliest meetings of advocates addressing climate change. It was also during this period that the U.N. Intergovernmental Panel on Climate Change (IPCC) was created in 1988 and formal international negotiations on a climate treaty began in 1991; these culminated in Rio de Janeiro in June 1992 with a U.N. Framework Convention on Climate Change (UNFCCC) that the first President Bush and the U.S. Congress ratified. A review of correspondence between then-RBF president Bill Dietel and program staff clearly indicates that the Rio negotiation and treaty, and the creation of the Intergovernmental Panel on Climate Change, were specific aspirations of the RBF program at the time.”

Although from the late 1980s onward, it was smooth sailing for the Fund, by 2009 the Rockefellers hit a snag. Acknowledging that the selling of the IPPC rapport has become increasingly difficult since the Climategate scandal erupted, the Fund is now stepping up its efforts to refuel the heavily diminished effectiveness of the effort:

“While public awareness of the urgency for addressing climate change spiked in 2007, a deep erosion of public trust in climate science was sparked by an unauthorized public release of e-mail messages from the computer system at the University of East Anglia in Britain in late 2009. These e-mails appeared to suggest that scientists were using tricks to hide temperature declines and attempting to discredit scientists who were skeptical of human caused climate change.”

Despite the described “erosion of public trust” the Rockefeller’s at the same time marvel at the results of their grant-making schemes from 2005 to 2010:

“As philanthropic giving has grown over the past several years, with it have grown new organizations, new alliances, and new campaigns. Just a few short years ago, climate change was addressed by a small subset of the environmental movement. It is fair to say that the issue now has a growing movement of its own. Powerful voices from business, faith, national security, youth, labor, and agricultural groups have joined the fight for robust climate change policy.”

To illustrate that this buying off on a mass scale of so-called “non-green voices” by the Rockefellers is far from an incidental funding-program, we know that the Rockefeller Foundation also actively engaged celebrity-journalists. As far back as the mid seventies the Foundation has been busy buying off reporters and funding media-empires into existence. Even then “climate change” was actively being promoted as a tragic result of human meddling in the affairs of mother earth. Genetically engineered food was already being pushed as the cure to remedy all ills. The 1974 Rockefeller Foundation journal reports:

“Several science editors were asked to participate in Foundation meetings on climate change, food production and interstate conflict, genetic resistance in plants to pests, and aquaculture. Stories appeared subsequently on the front page of The New York Times, and the Associated Press carried substantial stories which were widely used. In each instance, the writers were introduced to our program officers and encouraged to use them as resource people. (Officers are now, in fact, being called on by journalists, particularly in areas of current high news interest such as food production, population problems, environmental issues, and the arts.).”

On several occasions, and in different publications spread throughout its long and sordid past, the Rockefeller Foundation openly brags using media- figureheads for their own purposes. In none of these instances does the RF mention any problem encountered with any of the media moguls they contacted. In the 1974 yearly report, Bill Moyers is mentioned as one of the beneficiaries of information disseminated by the Foundation.

“In preparing its remarkable 25-part series on the world food situation, the New York Times reporters have become acquainted and have established fruitful ongoing relationships with a good many of our officers. Our staff have provided substantial information and further contacts for Bill Moyers in his television series dealing with the problems of global interdependence. These are only a few of the many productive new relationships we have established with representatives of the mass media.”

Another arm of the octopus, the United Nations Population Fund (UNFPA) put out a document in 2009 describing specific tricks used by the Fund to reach congregations unwilling to go along with the UN’s population control programs:

“UNFPA has found that leaders of faith ‐ and interfaith ‐ based organizations are open to discussing reproductive health, if issues are addressed with care and sensitivity.”

These “agents of change” should also be recruited to protect and promote the overall agenda “through countering misinformation campaigns and building social support within the governments for the ICPD (International Conference on Population and Development).”

The ultimate goal of these engagement efforts is clearly described:

“Create a conducive socio‐cultural environment (impacting on behaviour, attitudes and practices) to ultimately promote and mobilize key communities towards achieving the goals of the ICPD PoA (International Conference on Population and Development Programme of Action) and the MDGs (Millennium Development Goals).”

“The National Religious Partnership on the Environment is an alliance of the US Catholic Conference, Coalition on Environment and Jewish Life, National Council of Churches, and the Evangelical Environmental Network that serves more than 100 million Americans.”

Another UN front, called the Interfaith Partnership for the Environment was admittedly founded in the mid 1980s to, as the UNEP website teaches, “… inform North American congregations about the serious environmental problems facing life on earth.”

The UNFPA, as the enforcement arm of the overall infrastructure, joined with their brother- and sister-agencies in the UN to encircle the world’s religions reminiscent of a pack of hungry wolves:

“Since 2002, UNFPA has emphasized the integration of culturally sensitive approaches into programming efforts. Toward this end, it has worked closely within communities and with local agents of change, including religious leaders.”

The pattern leaves little for the imagination. The old boys are at it again, using their resources to step up the propaganda another notch. After all, after the discrediting of the global warming contrivance, the globalists will have to increase their flow of ammunition in the infowar if they want to have a chance.