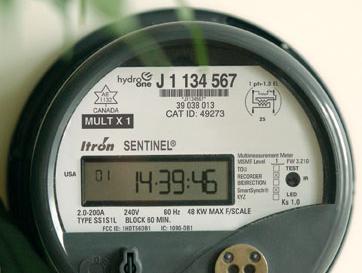 For those who like to research and really get into the background of smart meters.  Here is some outstanding information and supports what we’ve been saying all along that the smart meter issue is a Constitutional and 4th amendment issue.  This information should provide some answers.

Here is the link to the Congressional Research Staff document – http://assets.opencrs.com/rpts/R42338_20120203.pdf

Regulating the Use and sharing of energy consumption data: – http://www.albanylawreview.org/Articles/Vol75_1/75.1.0013%20Forbush.pdf

The Smart Grid:  The complexities and importance of data privacy andsecurity http://commlaw.cua.edu/res/docs/05-v19-2-Frisby-Final.pdf

We have all heard a lot of discussion lately on the energy department’s move toward a “smart grid” and the use of “smart meters” fueled by the stimulus funding from the 2009 American Recovery and Reinvestment Act. This smart grid promises to “increase energy efficiency, bolster electric power grid reliability, and facilitate demand response, among other benefits.” However the devil is in the details; as they say.

In order for the smart meter program to be of any benefit to the grid as a whole it would necessitate nearly universal usage across the country. The concept on the surface is actually a good idea if energy demand is the actual goal. For that matter, energy consumption demands could be ascertained at the point of separation to the public at the local power sub-stations that serve individual communities and thus alert the system of increased demand and therefore increased production requirements. So why are they pushing to install one in every home in America?

To get the answer is very easy indeed as the Congressional Research Staff has compiled a research paper on this exact topic and from which I have derived much of my article today and this is what they reported.

The report states that to fulfill their desired ends: “smart meters must record near-real time data on consumer electricity usage and transmit the data to utilities over great distances via communications networks that serve the smart grid.” Okay, that makes sense but again why every household and not at distribution points within the neighborhood which monitors the near real time usage in that local?

Well thanks to the report they also tell us that: ”Detailed electricity usage data offers a window into the lives of people inside of a home by revealing what individual appliances they are using.” Now let’s look at that statement a moment – their “stated” goal for this device was so that they could better regulate the grid reliability and better demand response. What does it matter to an energy supplier what appliances I am running in my home if their real concern was just to provide better control of the grid supply? Could it possibly be that this is a big brother conspiracy of a pending police state? And is it still a conspiracy if it is in fact true?

Within the opening paragraphs of the report they state that they are looking at this, among other things, from a 4th Amendment concern and “As we progress into the 21st century, access to personal data, including information generated from smart meters, is a new frontier for police investigations.” Just as communication interception, email interception, social media sites, etc. have become sifting pools for government spying on everyone to purportedly catch a few bad guys – kind of like treating everyone as a criminal to catch a real criminal. How great would it be if you could also gather data from inside every home in America on their electrical equipment and usage?

In fact the report mentions this exact concern stating: “courts have used the third-party doctrine to deny protection to information a customer gives to a business as part of their commercial relationship. This rule is used by police to access bank records, telephone records, and traditional utility records.”And just like these areas were once protected, requiring warrants in order to invade the privacy of these records it has set a precedent that will assist in further expansion of the government’s ability to interject itself into every aspect of our lives.

So how detailed can reading a meter really get and is this really that important to understand? Most people would be shocked by how much data can be derived by these smart meters. In the CRS report they referenced a 2010 National Institute of Science and Technology report that detailed some alarming detail that can be ascertained from this data such as:

• ‘By combining appliance usage patterns, an observer could discern the behavior of occupants in a home over a period of time. For example, the data could show whether a residence is occupied, how many people live in it, and whether it is “occupied by more people than usual.” According to the Department of Energy, smart meters may be able to reveal occupants’ “daily schedules (including times when they are at or away from home or asleep), whether their homes are equipped with alarm systems, whether they own expensive electronic equipment such as plasma TVs, and whether they use certain types of medical equipment.”’

A sample graph taken of a home energy usage shows what activity is taking place at any given time. Because the electrical “signature” of every appliance is different they are able to ascertain exactly what equipment is being used as the following graph shows.

Utilizing electrical usage data in law enforcement is not unusual. Historically if law enforcement has suspicion that a certain individual may be illegally growing drugs on their property they may get a warrant on past electrical usage of the property to determine if grow lights are being used indicated by large spikes in energy consumption. From the government’s position; how valuable would it be to have real-time data on every household in a state or the nation for that matter, on not only what they are doing but the specific equipment being used? This may be too tempting for the power elite to pass up.

Along with the potential for government/police abuse of this information, and history has shown that when government feels a compelling need to access data it will do whatever it needs to in order to obtain it, is also the potential for cyber theft and other commercial intrusions.

One example given in the report was medical insurance companies using the data to determine the use of a certain medical device within the home and how that may complicate medical coverage, or whether a device is being used improperly and therefore will void a product warranty, and marketers could use the data to determine certain equipment usage and thus target sales mailings, etc. Even worse criminals could hack the data to determine the best homes to target based on certain “signature” equipment that gives them greater sales on the black market as well as the most likely times when no one is at home.

The remaining pages of the 48 page report deals with how that data may, or may not, be protected under the 4th Amendment or other laws currently in force. One point that was made was that the data would most certainly fall under the “protected record” status and therefor would have to comply with the Federal Privacy Act statutes.

Knowing how the government has entrenched itself into every aspect of our commercial lives and communications I do not have a comfortable feeling that this data will be treated any different and over time will become just another tool the government can use to monitor the citizens activities.

Remember, all they claimed they were trying to do is “increase energy efficiency, bolster electric power grid reliability, and facilitate demand response, among other benefits.” I do not believe that knowing when each and every appliance is turned on or off in a single home will matter one iota to their stated goal and that only the aggregate of energy usage for a specific area will be of use.

However, if knowing each appliance signature and during peak usage they could limit your availability of power – sort of a purposeful brownout – in which you just would not have the necessary power available to run an appliance at peak proficiency and thus reduce your consumption and increase overall energy efficiency; now that may be of value.

Sound farfetched? Well during an interview on the Glen Beck show on Fox News it was revealed that: “No, not so much. This is from U.S. News and World Report. This is from Carol Browner. She’s the new climate czar. Yes. She said, quote, “We need to make sure that we’re moving electricity in the smartest way and using the most cost-effective electricity at the right time.Eventually, we can get to a system where an electric company will be able to hold back some of the power so that maybe your air-conditioner won’t operate at its peak. So you’ll still be able to cool your house, but that will be a savings to the customer.”

1- ‘Smart meters’ – the new silent killer
2- Update: My Fight Against the ‘Smart’ Meter

Michael LeMieux was born in Midwest City, Oklahoma in 1956 and graduated from Weber State University in Utah with a degree in Computer Science. He served in both the US Navy and US Army (Active duty and National Guard) and trained in multiple intelligence disciplines and was a qualified paratrooper. He served with the 19th Special Forces Group, while in the National Guard, as a Special Forces tactical intelligence team member. He served tours to Kuwait and Afghanistan where he received the Purple Heart for injuries received in combat.

Mr. LeMieux left military duty at the end of 2005 after being medically discharged with over 19 years of combined military experience. He currently works as an intelligence contractor to the US government.

Michael is a strict constitutionalist who believes in interpreting the constitution by the original intent of the founding fathers. His research has led him to the conclusion that the republic founded by the Constitution is no longer honored by our government. That those who rule America today are doing so with the interest of the federal government in mind and not the Citizens. Michael believes that all three branches of government have strayed far from the checks and balances built into the Constitution and they have failed the American people. A clear example is the Second Amendment, which the Supreme Court and the founders have all said was an individual right and could not be “infringed” upon, now has more than 20,000 state and federal laws regulating every aspect of the individuals right, a definite infringement. He has traveled around the world living in 14 States of the Union including Hawaii, and visited (for various lengths of time) in Spain, Afghanistan, Kuwait, Korea, Scotland, Pakistan, Mauritius, Somalia, Diego Garcia, Australia, Philippines, England, Italy, Germany, and Puerto Rico.

Michael now lives in Nebraska with his wife, two of his three children, Mother-in-Law and grandchild. His hobbies include shooting, wood-working, writing, amateur inventor and scuba diving when he can find the time.