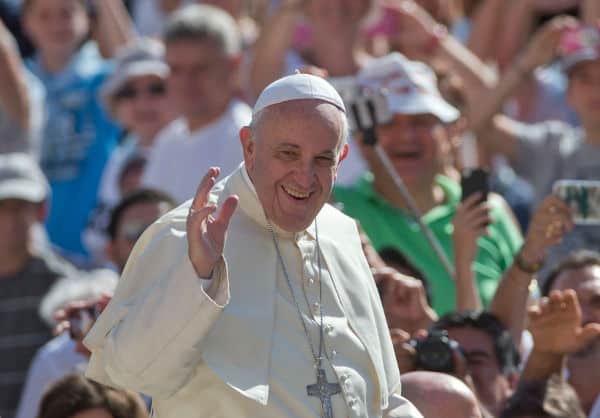 Christians who have been paying attention and warning of the progression of the New World Order have predicted this merging of religions under “Mother Rome” for a long time. Not long ago, it seemed unimaginable that protestant Christians would ever unite under the “church” that was responsible for the (torture and) murder of an estimated 68,000,000 believers over a period of 500 years during the “inquisitions”. The reformers who were tortured and killed to gain freedom from the Papacy have been all but forgotten. Are we to believe that this anti-Christ church has changed it’s colors and are now teaching the gospel of Jesus Christ, the only gospel that frees men from their sin so they can walk in newness of spiritual life with the promised hope of an eternity with God? People who are not paying attention today, not questioning the popular, feel-good teachings being pandered everywhere are walking right into the belly of the beast. May God open the eyes of His people. Please consider the writing by the Rev Sun Myung Moon from 2001 as well as others below it as a backdrop to what we’re witnessing:

“Jesus, because of Israel’s disbelief and persecution, was forced into a life of wandering. He was unable to fulfill the hope that speaks both to the spirit and the flesh. But the Messiah comes with the mission to break down all barriers in heaven and earth and bring about a single unified whole….

When the Messiah’s efforts to build a true nation were shattered, Israel suffered enormously. So the Lord who comes again is responsible to perfect Adam and fulfill the mission of the Messiah….

The fruit of God’s labor was to have come about by the people of Israel accepting Jesus and forming a worldwide foundation. This was to have led to the establishment of a world centered completely on God and Jesus on earth. Because Jesus died prematurely, however, this world was established only spiritually….

God has been fighting for 2,000 years to build a foundation that can connect to the world….  To find such spiritual people and make the necessary preparations, God is working through a new religious movement centering on Christianity….

I hope that all religious people will join their hearts together and follow through on my proposal to establish a council within the United Nations composed of representatives from various religions, parallel with the General Assembly. If there is one lofty task that the United Nations can perform for the sake of humankind, it would be to contribute to humanity’s spiritual recovery on the foundation of God’s true love….

I have chosen leaders of good conscience from not only the religious field but also from government, philosophy, business, culture and other fields, and provided true love education that teaches “the life lived for the sake of others.” On this foundation, I have already appointed tens of thousands of Ambassadors for Peace. All around the world, they carry the banner of the Interreligious and International Federation for World Peace that I founded. They are devoting their full efforts to bringing about the world of peace that is the fervent desire of God and humankind.” – “Governance and the Role of Religion in Peace and Security: Toward an Interreligious Council at the United Nations” – Rev. Sun Myung Moon – 9/21/2001 New York

“The Church seems afraid to invest in new modes of being the Church, breaking free from antiquated models and irrelevant traditions toward living the gospel in a twenty-first-century context.”[1]  George Barna, Leaders on Leadership

“Our common future will depend on the extent to which people and leaders around the world develop the vision of a better world and the strategies, the institutions, and then will to achieve it.”[2] The UN Commission on Global Governance

“…there is a substantial critical mass of people and churches that are already moving.’ …While acknowledging that there are still many unhealthy churches, there is a justified change in basic premises, basic attitudes, basic mind set… on the whole, we are on the march….”[3] Peter Drucker on the Church and Denominations,” Leadership Network.

Ronnie Floyd, Lecrae & Hillsong Unite with the Pope at Monumental Together 2016 Gathering

As has been thoroughly covered elsewhere, the Together 2016 is hosting many theologically questionable people whom are widely popular with evangelicals.  This rogue’s gallery includes Hillsong UNITED, Christine Caine, Kari Jobe, Kirk Franklin, the rapper “who happens to be Christian,” Lecrae, SBC President, Ronnie Floyd, Josh McDowell, Tedashii, Trip Lee, “God’s lover” Ann Voskamp, Matthew West, and Roman Catholic musician Matt Maher. It has to the attention of the Pulpit & Pen that Matt Maher won’t be the only Roman Catholic featured at this event. Pope Francis has added himself to the lineup,  stating that he will speak to the audience via video. Founder of PULSE, Nick Hall, who helped organize the event, said,

We are humbled and honored by his involvement and eager to share his message with the crowd that gathers at Together 2016…That His Holiness would choose to speak into this historic day is a testament to the urgency and the need for followers of Jesus to unite in prayer for our nation and our world.

Many of the people in the lineup have already demonstrated a lack of Christian commons sense.  For example Kirk Franklin helped write a profane gospel album with Kanye West and Ravi Zacharias gave a evangelically weak lecture sat the Mormon Tabernacle and often speaks with Christian figures of ill-repute such as Christine Caine.  Now Zacharias, West, and their compatriots will engage in a partnership with the Pope of Rome himself.  This isn’t a mere demonstration of a lack of common sense.  This is a flouting of biblical admonition.

Sadly, inappropriate partnerships are nothing new for Southern Baptist President, Ronnie Floyd.  In 2015, Floyd spoke at the ecumenical IHOP OneThing Gathering, hosted by NAR luminary, Mike Bickle.  Floyd made it clear that he believed the doctrinal differences between he and Bickle were minimal. He has taken a similar and more concerning position with regard to the Together 2016 gathering.  In a letter he wrote to the events’ producers, he stated:

In 1997, Promise Keepers held their Stand in the Gap rally on the National Mall. I had the privilege to speak to over 1.3 million men who attended from all over America. It was one of the greatest moments of my life. Unquestionably, the scene of a sea of men gathered to experience the Lord together was epic.

Now is the time for another million or more people from our generations to come together on the National Mall in Washington D.C. A gathering of people from all backgrounds of life and every ethnicity joining together in one place, at one time, for one day to unite around Christ and His hope for America and the World

It’s incredible that the president of the Southern Baptist Convention, a denomination that has historically stood on conservative biblical truth, has not only displayed a lack of discernment by partnering with an IHOP dominionist but with the false-gospel-proclaiming pontiff of the apostate Roman Catholic Church.

It does’t take a great theologian to figure out that God is not going to bring a revival through false worship that He hates.

Roman Catholicism teaches many dangerous doctrines. Chief among these is the teaching that Christians are saved by a combination of faith and works (Council of Trent, Canon 9). Rome also teaches that the Bible is not sufficient, but that the Bible and Church Tradition are equal in authority.  In these Catholics traditions are seen things like praying to dead saints and the sanctification of Mary as a Co-mediator with Christ. The Catholic Church teaches many doctrines that should cause Bible-believing Christians to separate from them.  Yet Ronnie Floyd chooses to speak at a conference with the Pope.

Do not be unequally yoked with unbelievers. For what partnership has righteousness with lawlessness? Or what fellowship has light with darkness? What accord has Christ with Belial? Or what portion does a believer share with an unbeliever? 2 Corinthians 6:14-15