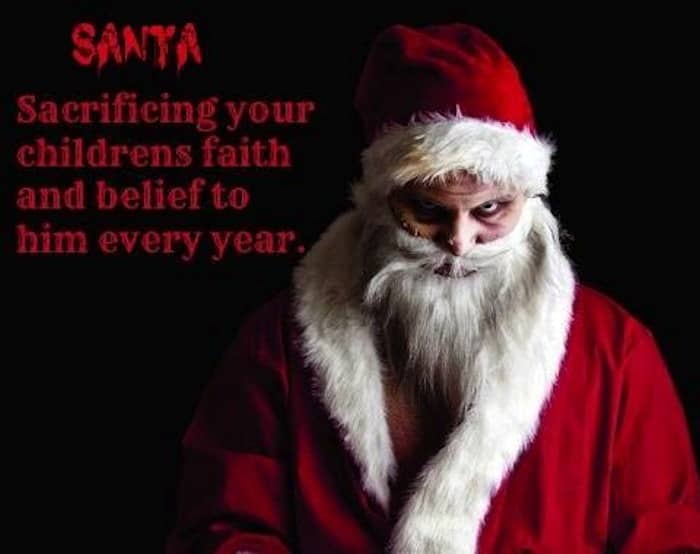 “A wink of his eye, and a twist of his head, soon led me to know I had nothing to dread.” – Twas’ the Night Before Christmas, Clement C. Moore

Just who is Santa Claus, really? Wasn’t he just a sweet old guy whose legend grew over time? What’s the harm in pretending that an old elf dressed up in a red and white suit climbs down the chimney to bring children toys for being good? Well, for one thing, have you ever noticed that the letters in the name “Santa” are the same letters as those in “Satan”? Oh c’mon! That’s just a coincidence! … Is it?

“H.P. Blavatsky, the mother of the new age movement, said on page 350 of her book, The Secret Doctrine, Vol. 2: “The name isn’t important. It is the letters”. “Santa” has the same letters as “Satan.””

The modern-day Santa Claus is an American version of Saint Nicholas, a fourth century Roman Catholic bishop from Asia Minor who was noted for his good deeds and gift giving. This tradition first spread throughout Europe, and then found its way to America by the early Dutch settlers.

Since God’s word warns us to BEWARE of tradition (Col. 2:8), we shouldn’t be surprised to find the Devil right in the middle of the world’s most celebrated holiday. Lucifer’s desire has always been to dethrone God and exalt himself (Isa. 14:12-15). He desires worship (Luke 4:7; II Ths. 2:3-4). Perhaps you’ve never thought of it, but please note how Satan robs the Lord Jesus Christ of His glory by spreading the Santa Claus tradition…

SANTA IS ETERNAL
A child knows nothing of his beginning. To a child, Santa has just always existed.

JESUS CHRIST IS ETERNAL
“I am Alpha and Omega, the beginning and the ending, saith the Lord, which is, and which was, and which is to come, the Almighty.” (Rev. 1:8)

SANTA LIVES IN THE NORTH
Tradition holds that Santa Claus lives at the North Pole, a place ABOVE the rest of us.

JESUS CHRIST LIVES IN THE NORTH
“Beautiful for situation, the joy of the whole earth, is mount Zion, on the sides of the north, the city of the great King.” (Psa. 48:2)

JESUS CHRIST WEARS RED CLOTHING
“And he was clothed with a vesture dipped in blood: and his name is called The Word of God.” (Rev. 19:13)

SANTA HAS WHITE HAIR
Santa is always pictured as an old man with white hair like wool.

JESUS CHRIST HAS WHITE HAIR
“His head and his hairs were white like wool, as white as snow; and his eyes were as a flame of fire;” (Rev. 1:14)

SANTA FLIES AROUND GIVING GIFTS
Santa has the ability to defy the laws of gravity and fly around giving gifts to people.

JESUS CHRIST ASCENDED AND GAVE GIFTS UNTO MEN
“But unto every one of us is given grace according to the measure of the gift of Christ. Wherefore he saith, When he ascended up on high, he led captivity captive, and gave gifts unto men.” (Eph. 4:7-8)

SANTA IS COMING SOON
During the Christmas season it is emphasized over and over that “Santa is coming”.

JESUS CHRIST IS COMING SOON
“He which testifieth these things saith, Surely I come quickly. Amen. Even so, come, Lord Jesus.” (Rev. 22:20)

JESUS CHRIST IS OMNISCIENT
“The eyes of the LORD are in every place, beholding the evil and the good.” (Pro. 15:3) “And Jesus knowing their thoughts said, Wherefore think ye evil in your hearts?” (Mat. 9:4)

SANTA IS OMNIPRESENT
Santa must be omnipresent, because he has the ability to visit over a billion homes in a twenty-four hour period. That’s over 1100 per second!

JESUS CHRIST IS OMNIPRESENT
“For where two or three are gathered together in my name, there am I in the midst of them.” (Mat. 18:20)

SANTA IS OMNIPOTENT
He has the ability to carry presents for over a billion children.

JESUS CHRIST IS OMNIPOTENT
“And Jesus came and spake unto them, saying, All power is given unto me in heaven and in earth.” (Mat. 28:18)

JESUS CHRIST HAS SPIRIT HELPERS CALLED ANGELS
“Then the devil leaveth him, and, behold, angels came and ministered unto him.” (Mat. 4:11)

Sanat Kumara is worshipped by some new age groups as God. H.P. Blavatsky, the mother of the new age movement, said on page 350 of her book, The Secret Doctrine, Vol. 2: “The name isn’t important. It is the letters”. “Santa” has the same letters as “Satan.” According to G.A. Riplinger, “Ole Nick” is listed as the name of a fallen angel in the Dictionary of Fallen Angels. (New Age Bible Versions, Gail Riplinger, pg. 53)

Friend, don’t glorify Satan by giving the glory and attributes of Jesus Christ to Santa Claus! Santa is a COUNTERFEIT GOD, and you are honoring Satan when you teach your children to believe in Santa! Christians should teach their children the TRUTH. We should glorify God by teaching our children about Jesus Christ and His saving grace!

***An excellent, more in depth article titled “Santa Claus: The Imposter” can be found here –> Dial-The-Truth-Ministries <-  ***