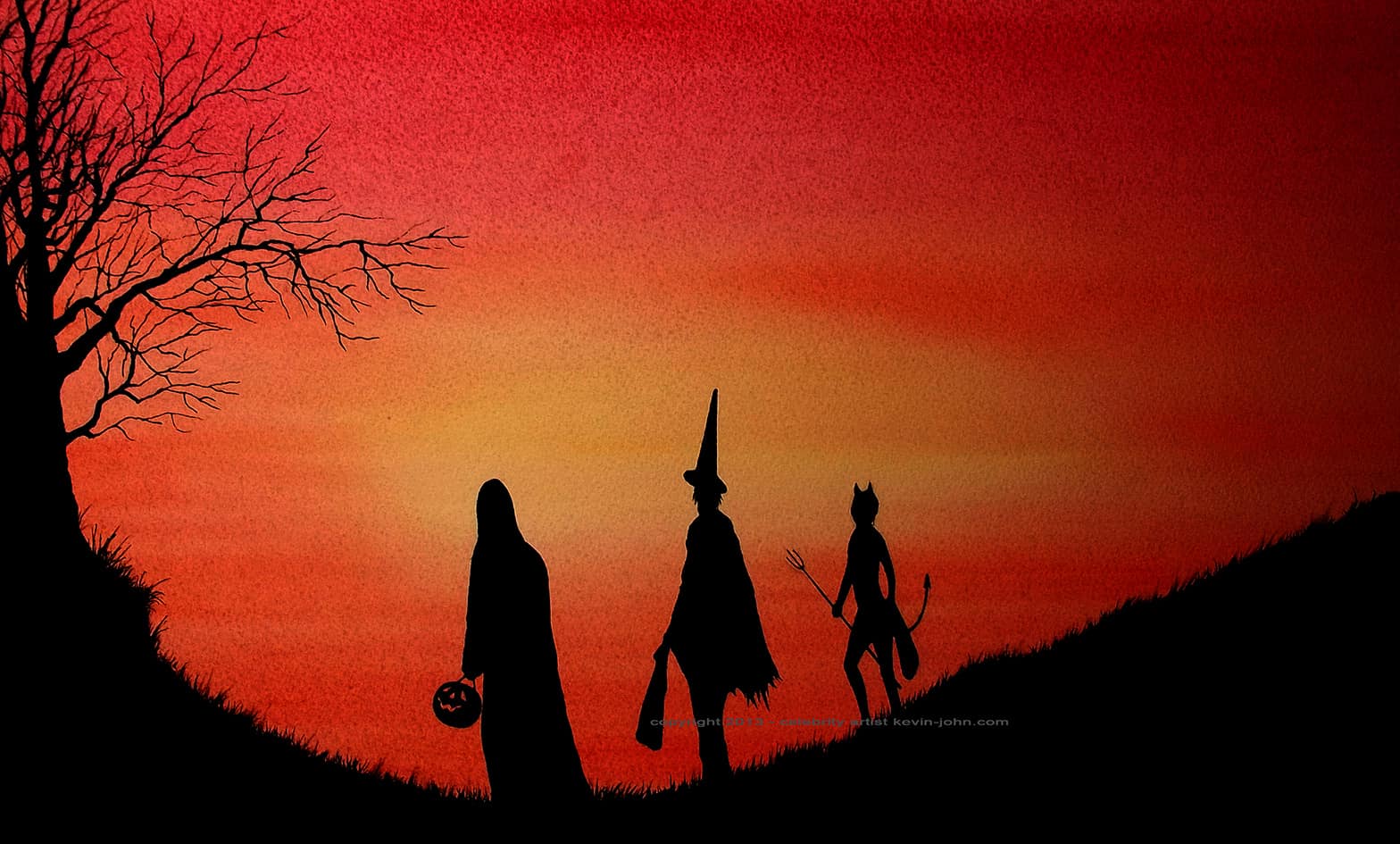 Religious holidays are all but illegal in 21st century America. Those few that survive have been watered-down beyond recognition. Thanksgiving, a day once solemnly set aside to thank God for our blessings as a nation, has morphed into Turkey Day, a day set aside to worship the guest of honor at dinner.

“Who changed the truth of God into a lie, and worshipped and served the creature more than the Creator, who is blessed for ever. Amen.” (Romans 1:25)

Most Americans don’t gather to give thanks to God, they gather to eat and watch football. For millions, it is the one day a year they say grace before meals, and that is about as religious a holiday as it is gonna get.

But there is still one religious holiday that is untouchable by either the Political Correctness Police or a vote-hungry Congress. Hallowe’en.

Your kids will be encouraged to dress up as witches and hobgoblins, to exchange Hallowe’en cards or small gifts, to wish each other a ‘Happy Hallowe’en’ and to engage in a day-long celebration that doesn’t end until well after dark.

Make no mistake about it, Hallowe’en is a religious holiday.  It just isn’t a  Christian holiday.  It derives its name from ‘All Hallow’s Eve’ — the day before the Catholic holiday of “All Saint’s Day” on November 1st.  According to the AmericanCatholic.org, Halloween was adopted by the Catholic Church as a day of “communion with the saints” who are still paying for their sins in purgatory and those who’ve either paid their sin debt themselves or were “prayed out” by someone still alive.

A person could obtain a plenary indulgence by saying a particular formula of prayer performed on November 1st.

“In 835, Pope Gregory IV moved the celebration for all the martyrs (later all saints) from May 13 to November 1. The night before became known as All Hallow’s Even or “holy evening.” Eventually the name was shortened to the current Halloween. On November 2, the Church celebrates All Souls Day.

The purpose of these feasts is to remember those who have died, whether they are officially recognized by the Church as saints or not. It is a celebration of the “communion of saints,” which reminds us that the Church is not bound by space or time.

The Catechism of the Catholic Church says that through the communion of saints “a perennial link of charity exists between the faithful who have already reached their heavenly home, those who are expiating their sins in purgatory and those who are still pilgrims on earth. Between them there is, too, an abundant exchange of all good thing.”

“Purgatory” is a doctrine unknown to the Bible. It is based largely on one of the books of the apocrypha and Catholic tradition that was formulated into a cohesive doctrine of the church at the Councils of Florence and Trent.

But Hallowe’en was originally a Celtic religious holiday. The Celts believed all laws of space and time were suspended during this time, allowing the spirit world to intermingle with the living. The dead would roam the earth seeking living bodies to possess.

Naturally, the still-living did not want to be possessed. So on the night of October 31, villagers would extinguish the fires in their homes, to make them cold and undesirable. They would dress up in all manner of ghoulish costumes and noisily parade around the neighborhood in order to frighten away spirits looking for bodies to possess.

The holiday was known as the Feast of Samhain, and was the High Holy Day of the Druidic pagan religion.

The Romans later adopted the Celtic practices as their own. In the first century AD, Samhain was assimilated into celebrations of some of the other Roman traditions that took place in October, such as their day to honor Pomona, the Roman goddess of fruit and trees.

The thrust of the practices also changed over time to become more ritualized. As pagan belief in spirit possession waned, the practice of dressing up like hobgoblins, ghosts, and witches took on a more ceremonial role.

The custom of Halloween was brought to America in the 1840’s by Irish immigrants fleeing their country’s potato famine.

The custom of trick-or-treating is thought to have originated not with the Irish Celts, but with a ninth-century European custom called souling. On November 2, All Souls Day, early Catholics would walk from village to village begging for “soul cakes,” made out of square pieces of bread with currants.

The more soul cakes the beggars would receive, the more prayers they would promise to say on behalf of the dead relatives of the donors. At the time, it was believed that the dead remained in limbo for a time after death, and that prayer, even by strangers, could expedite a soul’s passage to purgatory and on to heaven.

There is little doubt in my mind that the Celtic Druids worshipped Satan,  (the angel of light) and there is plenty of documentation of the ‘ancient knowledge’. (Modern archeologists are still scratching their heads over Stonehenge).

Other ancient pagan religions also claimed divinely-obtained knowledge, and left behind similarly perplexing ruins, like the Mayan temple, the pyramids of Egypt or the statues of Easter Island.

Genesis Chapter Six makes reference to the offspring of an unholy mating between angels and the daughters of men in the period before the Flood.

“… the sons of God saw the daughters of men that they were fair; and they took them wives of all which they chose.” (Genesis 6:3)

Of the offspring of these unholy unions, Genesis tells us,

“There were giants in the earth in those days; and also after that, when the sons of God came in unto the daughters of men, and they bare children to them, the same became mighty men which were of old, men of renown.” (Genesis 6:4)

The ancient Greeks and Romans worshipped a pantheon of gods and goddesses, together with strange mythical creatures like minotaurs, centaurs, and so on.

Joshua spoke of the ‘gods’ from before the Flood that were still being worshipped by the ancient Israelites:

“And if it seem evil unto you to serve the LORD, choose you this day whom ye will serve; whether THE GODS WHICH YOUR FATHERS SERVED THAT WERE ON THE OTHER SIDE OF THE FLOOD, or the gods of the Amorites, in whose land ye dwell: but as for me and my house, we will serve the LORD. (Joshua 24:15)

When I was a young Christian, I used to rail against the celebration of Hallowe’en because it was Satan’s high religious holiday. But as I’ve matured in the Lord, I’ve come to see it a bit differently. And maybe because of contemporary history.

It is an object lesson to Christians of the reality and existence of Satan and a testimony to his status as the prince and power of the air and the ‘god of this world’. (2nd Corinthians 4:4)

C. S. Lewis wrote that the “greatest trick the devil ever pulled was in convincing the world he doesn’t exist.” But for Christians, is the one day of the year when Satan is unmasked and exposed as a real entity.

I don’t know if I ever made a convert by railing against little kids having fun dressed up in Hallowe’en costumes. I rather doubt it.  Hallowe’en’s roots are no more pagan than those of Saturnalia, also adopted by the Catholic Church, but renamed ‘Christmas’.

So I don’t rail against it anymore. It is too good a witnessing opportunity to waste by sounding like a wild-eyed fanatic railing against little kids in cute costumes having fun playing dress-up and gorging on tiny Hershey bars.

“And we know that ALL things work together for good to them that love God, to them who are the called according to His purpose.” (Romans 8:28)

In the end, they aren’t worshipping Satan.  They’re making fun of him.  And they are learning about him in the context of heaven and hell.  That tends to spark questions in young minds.

For many, the controversy about Hallowe’en festivities will eventually spark the same question — and the same choice — Joshua laid out before his men.

And it also demonstrates the truth of Paul’s comforting assurance that all things do work together for good to them who are the called according to His purpose.