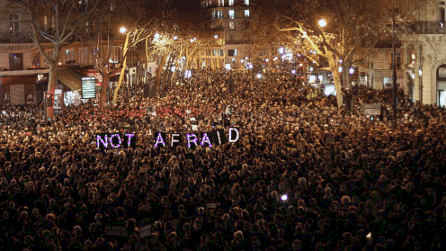 France, like most of Europe, embraces a humanistic philosophy
where Christianity is viewed as an irrelevant relic from the past.

After the brutal terrorist attack in Paris over four million people poured out unto the streets of France in tribute to the 17 people killed during three days of terror. Mass rallies occurred throughout France where the people chanted “We are not afraid” and giant signs were held up proclaiming “Not Afraid,” and “We Are Not Afraid.” Demonstrators gathered at the historic Place de la Republique as participants held up candles that spelled out “Je Suis Charlie.” The entire free world rallied in sympathy as they watched the French response to the brutal acts of terror via television and social media.

To quote the title of Samuel P. Huntington in his Foreign Affairs article entitled “The Clash of Civilizations,” January 3, 1992, the world was watching the clash of civilizations play out in what might be described as France’s 911. The images of armed Islamic extremists slaughtering unarmed civilians with assault rifles violently clashes with the images of Paris known worldwide as the city of love and culture. Unlike the United States, French citizens and the majority of the police are not allowed to carry weapons; in fact it is illegal in France for the French people to own most weapons. So here in Paris, France, a city known for its culture, art, philosophy, sculpture, film, fine food, and beauty, the barbarians inside the gate and outside the gate, whose ideas and beliefs seem to come from a time centuries ago, strike at the heart of European and Western culture.

Over 100,000 Jews have been fleeing France due to the rising anti-Semitism since 2013. The fact that the terrorists specifically targeted a Jewish “Kosher” grocery store in Paris will cause even more Jewish people to leave France.

According to the head of MI5, Andrew Parker, Al Qaeda militants in Syria are planning mass casualty attacks on the West in places like Britain, France and Germany. Other intelligence sources believe that America will also become the target of a wave of terrorist attacks in the future. France has a population of around 66 million, of which five million claim to be Muslim. Interestingly, less than two million people in France claim to be religious, with even fewer claiming to be practicing Christians. France, like most of Europe, embraces a humanistic philosophy where Christianity is viewed as an irrelevant relic from the past.

The philosophy of Voltaire and Rousseau and the Declaration of the Rights of Man and the Citizen along with the economic theories of Adam Smith have to a large degree formed Western societies .In many respects the Enlightenment helped to lift nations and cultures to a higher level free from the oppression and control of powerful religious groups. Edmund Burke was one of the first to suggest that the philosophers of the French Enlightenment were responsible for the French Revolution. However, the French Revolution had a fatal philosophical flaw: it basically made Man a god and ignored the Biblical concept that Man was a fallen creature and easily corruptible by things like power. In contrast, the American Revolution incorporated these Biblical truths and created a unique form of government based on the balance of power in which the three different branches of government were theoretically designed to act as checks and balances on power. In addition, the Constitution and the Bill of Rights were unique documents designed to keep in check the corruption of political power, if they are given the proper place the Founders of the Constitution provided for.

Finally the First French Republic was ended by Napoleon, who used the Enlightenment philosophies of Voltaire to establish an enlightened scientific dictatorship. Voltaire was heavily influenced by Sir Francis Bacon, who advocated rule by philosopher-kings, an idea he borrowed from the Greek philosopher Plato, who may have formed his ideas on governance from the historical records he was able to gather about Atlantis. These ideas of rule by benevolent philosopher-kings have had merit when the kings ruled according to the highest ideals of the Enlightenment. But history shows, beginning with Robespierre and the Reign of Terror, that absolute power corrupts absolutely and that philosopher-kings can often transform into brutal dictators. Lenin’s Bolshevik (communist) Revolution in 1917 was inspired in large part by the ideas of the French Revolution, but it, too, went to the dark side and hundreds of millions of people were killed or imprisoned. The Enlightenment and French Revolution birthed the basically democratic socialist nations of Europe like France, England, Germany, and others. The entire plan for a new world order, a global economic system, and a Utopian World Socialist government created by the Fabian Socialists like Bertrand Russell, H.G. Wells, and Aldous Huxley from outward appearances seems to incorporate the best ideals of the French Revolution and Enlightenment. But the dark side of the Enlightenment, like the dark side in Man’s soul, always lies hidden beneath the surface of the waters. The benevolence of the philosopher-kings championed by the French philosophers is highly fragile. When crisis or chaos erupts, just like in the society birthed by the ideas of the American Revolution, great pressures are brought to bear to seize freedom and rights from the people in the name of protecting them from things like terrorism.

This is why what happens in France is so important, because France remains the great spiritual center of the Enlightenment. The French people gathered in mass demonstrations to declare “We are not afraid,” but the question must be asked, “On what basis or foundation will you not be afraid?” The protests and sentiments of the French people are noble and admirable, but even French history tells us that the very nature of societies change radically in response to threats to their existence. A military dictator named Napoleon arose to restore order in France after the chaotic first wave of the French Revolution and Napoleon gave credence to many of the ideals of the Enlightenment. But many other revolutions around the world, such as the Communist revolutions, perverted the ideals of the Enlightenment and produced brutal and dictatorial states, which killed millions. Even the National Socialist government of Adolph Hitler, who was popularly elected by the German people, killed over seven million people in concentration camps. But the lesson of history is that Hitler used the threat of terrorism to establish dictatorial control of Germany and the German people passionately cried out for Hitler and the Nazi Party to establish that dictatorship in order to protect them from terrorism.

So France like America, England, Germany, and other nations when faced with brutal terrorist attacks will decide what kind of nation and government they want. France has said, “We will not be afraid,” but when the terrorist strike occurs they will have to decide as America and the other nations will on what basis will we not be afraid? Most Western nations, including America, have moved in the direction of the Enlightenment. But all of these nations, including France, appear to have forgotten one of the primary historical lessons of the Enlightenment, that absolute power, when given to Man and not God, inevitably corrupts. This is the great challenge facing all Western societies in the face of terrorism. On one hand Western nations like France need both the organizational structure and the collective will to stop terrorism. But the cries for peace and safety at any cost whether they come from right wing populist movements or the faceless machinery of the Orwellian-style surveillance states eventually pose a threat equal to the threat of terrorism.

From a historical and philosophical basis, it appears the only solution is for nations to strategically mobilize their power to stop terrorism and that requires fundamental change and transformation. But the Achilles heel of all Western nations following in the footsteps of the Enlightenment is their refusal to admit Mankind’s’s fallen nature and the inevitable corruption of political leaders. Although the Enlightenment produced many positive changes it has a fatal flaw philosophically and that flaw is the erroneous belief that all people are basically good and that it is only his environment which makes a person evil. Modern societies which are based on the philosophy of secular humanism hold to the mythology that Man is basically good despite the evidence, because it is part of what can only be called a mystical belief in the idea of humanism. It was what the late Dr. Francis Schaeffer called a philosophical “upper story leap” in logic. In other words, it is a belief that is held apart from reason or logic.

Perhaps the most powerful proof that Man is not basically good comes from one of the primary tenets of humanistic belief, and that is Darwin’s Theory of Evolution’s claim that only the fittest or strongest survive. If one is to embrace Evolutionary Theory, then one also has to accept that according to Darwin all of Mankind’s behavior is ultimately based on survival. Therefore the act of survival is based on amoral and brutal strength along with the use of power. The superior species or civilization will survive because it has the power to do so. Despite the romantic notions of many who call themselves humanists, true humanists who understand what they believe know that there can be no appeal to the reason or sympathies of any enemy who rejects reason and sympathy in favor of a religious belief system that in many respects is built on killing all those who reject it.

The only way an individual or nation can deal with what has been termed an existential threat to its existence is through the use of power or force. The philosophy of the Enlightenment does not provide sufficient protections against the corruption of this force or power. The only philosophical belief system that is built on a balance of power is a Judeo-Christian worldview. The reason for this is that the Biblical Deity chooses to restrain His own absolute power based on His other attributes such as love, grace, mercy and forgiveness.

The Biblical God is holy, righteous, just, loving, and forgiving simultaneously. This is why the Biblical God, who is Triune in nature, sent Himself as the Son of God specifically to be sacrificed as the Lamb of God. The purpose for this is that God has chosen to love and save Man, even though His law demands Man’s punishment. The character of the Biblical Deity is one of Absolute Power voluntarily restrained with defined checks and balances.

For the moment, whether or not you believe in this God is secondary to the logic of His existence. Man does not possess the character to restrain His own power through checks and balances and every man and woman knows this instinctively. As such no man-made system of governance, including man-made religious institutions can protect Man from his own power. This is the great dilemma that faces France and every other freedom-loving nation when they respond to the terrorist threat. It is true, we should not be afraid! But on what basis are we not to be afraid?

I deal with these future trends in my new books, “Mass Event/Mass Awakening” and “A Prophecy of the Future of America.”