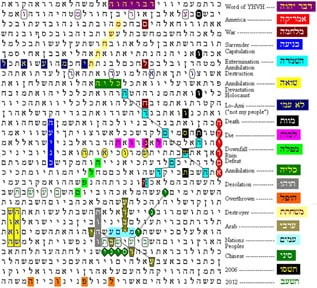 “Everything and everyone that ever was or ever will be was recorded in the text of the first five books of the Bible” (a traditional belief among devoted Jewish scholars). One of the most controversial, yet fascinating, new studies to have emerged is that of the Bible Code. With the release of the book “The Bible Code” in May, 1997 a spiritual explosion was heard throughout theword. The premise, if true, claimed that historical names, dates, places, times and events were “coded” within the first five books of the Bible.

The history of the Bible Code is an interesting one. It’s believed that thousands of years ago ancient cabalists believed there were secret messages within the Torah (the first five books of the Bible). But, the first signs of Bible Code research can be found with Rabbi Bachya ben Asher (1255 – 1340). However, the Bible Code wouldn’t begin its epiphanous walk into history until the 1940’s.

When Adolf Hitler came up with his “Final Solution: Rabbi Weissmandl, along with his family, were rounded up and put on a death train that was headed for a concentration camp. Right before the Rabbi was taken into custody, the Rabbi was able to grab a loaf of bread, two copies of the Torah and a dusty commentary by a 13th century scholar who had mentioned the hidden codes. On the train drive to the concentration camp, Weissmandl was able to escape, though only by himself, and eventually made it to the United States of America where he continued his work until he died in 1957.

In 1994, almost four decades after Rabbi Weismandl’s death, a former physics graduate student (Doron Witztum), a world-renowned mathematician (Eliyahu Rips) and an Israeli computer expert (Yoav Rosenberg) submitted a paper to “Statistical Science”. Their research dealt with what is known as “E.L.S.” (Equidistant Letter Sequences). E.L.S. are numerical patterns which contain messages that normally do not appear but, nevertheless, are still there.

In order to prove that the Bible Code really does exist Witztum, Rips and Rosenberg created what’s become known as “The Great Sage

Experiment”. Thirty-four names of renowned sages of Jewish history were chosen, along with their dates of birth and deaths. Each of those 34 names, along the dates of birth and dates were found; the odds of such a thing occurring were “1 in 775,000,000”. Needless to say, a firestorm of controversy exploded upon the world. Had God, indeed, left behind in the Torah (the first five books of the Bible: Genesis, Exodus, Leviticus, Numbers and Deuteronomy) further information about Biblical and future history that we had never seen before? It certainly does appear to be so! When looking into history the Bible Code has, thus far, spoken about such topics as:

These are but a sampling of what the Bible Code had revealed when we used it to look into history past. However, a couple of years before December 21, 2012 (another date in which the earth was supposed to faced multiple versions of cosmic cataclysms, and even the Rapture) I had seen hundreds of folks on internet espousing that they had finally “proof” that the Bible Code predicted doom and gloom on December 21, 2012. Allow me to illustrate what I am saying. 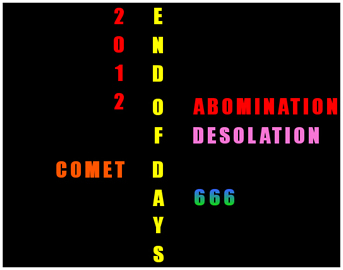 (Figure 1) America would become involved in some sort of war where there would be great annihilation and destruction. This would occur in the year 2012.

Using the Bible, once again, in Figure 2 we discover that on 2012 there would be great troubles, horror, terror and disaster because the sixth seal, found in the Book of Revelation, would be opened. And, in Figure 3, on December 21, 2012, yet again, another message of doom and gloom. Plus, if you’ll note, in some of the Bible Code examples others events were supposed happen in/around Dec. 21, 2012:

I believe it’s quite apparent to one and all that there were no cosmic calamities, doom and gloom scenarios, nor Rapture events which had happened. But this presents an immediate problem with the Bible Code. All of us have been led to believe that not only are they accurate, but they are so because they were placed in the Bible by God Himself. So, how could they be amiss in any form or fashion? I will explain in a bit.
On my web site, Facebook account and also through emails, I have been told that the Bible Code is predicting that:

1. Jade Helm 15 is going to take over America,
2. Barak Obama is going to declare martial law and become America’s dictator,
3. The next Rapture will occur and
4. In 2016 Hillary Clinton will become the President.

Deut. 18:10 – “There shall not be found among you any one…that useth divination…”

God’s own words forbid the practice of any form of divination because comes from the occult world which tries to usurp the power of God. In the scriptures God uses the prophets/prophecies to forewarn us of things which shall surely come to pass with 100% accuracy. Satan devised “divination” as another way of imitating God so that he (Satan) would appear to be as God to all who would follow him (Satan). Therefore, you cannot use the Bible Code to prophesy the future because that would be a form of “divination” which is a forbidden practice of God. However, you can use the Bible Code to look into past historical events via the Bible Code because, among other things, it does give you another layer of understanding to the majesty of the Bible; God’s own creation and words plus, it verifies the authenticity of the Bible being the actual words of God as written down by His servants who penned it all through the inspiration of the Holy Spirit.

Remember one thing Ladies and Gentlemen; if the Bible Code could foretell the future with a 100% accuracy, what happened to Dec. 21, 2012 in which we were supposed to face, yet again, cosmic calamities, the next Rapture, global war, ad nauseum?

As always, take care and God bless and keep you…