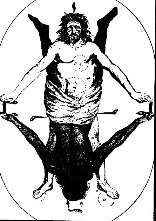 Frank followed Sabbatai Zevi’s strategy of pretending to convert to a target religion in order to infiltrate and destroy it.  Frank later returned to Poland with his followers and “converted” to Catholicism. His sponsor had been the King of Poland.

Chisholm, a Unitarian who soon became the first Director of the World Health Organization, advocated severing children’s morality from the “influence of their elders” by conforming to the amorality of the Kabbalah. [1][2]

Many years later, at the  2005 14th World Jewish Congress, Dr. Avraham Elqayam of Bar-Ilan University said the Kabbalist mindset was being mainstreamed through vehicles like Harry Potter books and movies, Madonna and other celebrities.

Why does the United Nations and the World Jewish Congress want Kabbalah taught to the masses of the West?

“Kabbalah” is the unacknowledged religion of the West, a fact that will become evident over time. It is the belief system of Freemasonry and organized Jewry, the two forces that govern the world. It is the reason God and the Ten Commandments have been banished from public life, why Christianity has been gutted and replaced by moral “relativity.”

Moshe was a prolific writer of books steeped in Medieval philosophy and occult mysticism. According to Wikipedia,  “He knew how to charm with brilliant and striking phrases without expressing any well-defined thought. He was a ready writer and wrote several mystical and cabalistic works in quick succession.”

These books were arguments against assigning any moral attributes to God or “the endless one” (Ein Sof ). He argued that distinction between good and evil place limits on the infinity of the Ein Sof. Further, Ein Sof is so transcendent that God’s not in this universe and has no direct interactions in it, but can be known through ten emanations or qualities of energy called the “Ten Sefirot.”

The Sefirot are the ten circles depicted in the ‘Tree of Life’ diagram pictured in the Zohar and Kabbalah. These mysterious medieval elements continue to intrigue credulous minds and made it a Middle Ages best seller.

WHERE DID THE KABBALAH COME FROM?

The Kabbalah is largely based on the Zohar. According to the Jewish Encyclopedia, this is its origin:

“There is a story told about how after the death of Moses de Leon, a rich man of Avila named Joseph offered the widow, who had been left without means, a large sum of money for the original from which her husband had made the copy; and she then confessed that her husband himself was the author of the work. She had asked him several times, she said, why he had chosen to credit his own teachings to another, and he had always answered that doctrines put into the mouth of the miracle-working Simeon ben Yohai would be a rich source of profit“. [3]

The specious notion of a Jewish secret mystery school complete with systems of divination and reality-altering magic created a sensation among Jews throughout Europe. However the scholarly Sephardic Jewish leaders in Moorish Spain dismissed the Zohar as a hoax full of heretical and dangerous ideas and banned it.

When the Catholics regained control of Spain from the Moors and expelled (or converted) the Jews in 1492,  the dominance of Sephardi culture over Jewry waned.

Many intellectuals went into exile in Jerusalem, where Issac Luria was teaching the Zohar.  The ban forbidding study of the Zohar was lifted in 1540 when the balance of power shifted to the Ashkenazi rabbis. Luria’s Kabbalah opus was published after his death, and Kabbalah replaced Hakirah ( Mishne Torah) as Judaism’s mainstream theology.

In the midst of this wishful fervor, the infamous Kabbalist Sabbatai Zevi [4] announced in Smyrna in 1666 that he was the Messiah.  Over a million Jews worldwide became his followers. Sabbatai Zevi preached the satanic doctrine, “Praised be He who permits the forbidden.”

He reasoned that doing good keeps the universe too balanced and slows down the return of God.  Therefore sin is virtue; and observance of the Torah morality was the sin. The essence of Satanism is to turn good and evil on their head.

Sabbatai Zevi’s movement thrived until he promised to overthrow the Caliph of Istanbul.  The Caliph had him arrested him and gave him the choice of converting to Islam or execution.  Sabbatai Zevi  converted without hesitation, telling his followers to do the same.

Conversion to Islam was a bit over the top for many rabbis who excommunicated the Sabbateans.  However, a core of followers converted with him.[5]

Rabbi Martin Antelman  believes an unknown number of Sabbatai’s followers returned to the mainstream fold of Judaism and remained secret practitioners of the cult.

The Nobel Prize winning Yiddish storyteller Isaac Bashevis Singer recounted legends among pre-Holocaust Jews in Poland of entire villages that succumbed to these Satanic Kabbalists. His novel “Satan in Goray” is devoted to this subject.

Sabbateanism went underground and within a century had a revival as the semi-secret cult of Jacob Frank.  When Adam Weishaupt’s branch of the Illuminati was exposed, Amschel Mayer Rothshild set Frank and his cult up in Frankfurt as the new head of the Illuminati.

Frank followed Sabbatai Zevi’s strategy of pretending to convert to a target religion in order to infiltrate and destroy it.  Frank later returned to Poland with his followers and “converted” to Catholicism. His sponsor had been the King of Poland. But within a year his infamy was obvious and he was imprisoned.

The Kabbah is a hoax, but one which governs our deluded and degenerate society.

For the Kabbalist, good and evil are ‘relative’ so evil is an illusion.  Instead of right and wrong, Kabbalah says every action is like the moon, with a light side and dark side.  The Kabbalists say that the adept must embrace his or her dark side to become, “a fully integrated human being”.

Not everyone who studies Kabbalah becomes a Satanist. But, Kabbalah is a prerequisite for ALL  Luciferian practitioners. Freemasonry rides on Kabbalah, the 19th century “Pope of Freemasonry” Albert Pike said, [6]

“The masonic Religion should be, by all of us initiates of the higher degrees, maintained in the Purity of the Luciferian doctrine. If Lucifer were not God, would Adonay and his priests calumniate him?

Yes, Lucifer is God, and unfortunately Adonay is also god. For the eternal law is that there is no light without shade, no beauty without ugliness, no white without black, for the absolute can only exist as two gods…”[7]

There is only one God. Lucifer is the spine-chilling vacuum that results from the absence of God. The Kabbalah is a hoax that allows its followers to reformulate reality to serve their selfish interests. This is why they teach that “truth is by its nature subjective.”

Modernism and secularism are based on the Kabbalah. It is the reason our “civilization” is preoccupied with violence, sex and the occult, and why current events appeared to be scripted in Hollywood.  It is the reason our political and cultural leaders are liars and why society has lost its bearings.

As long as Kabbalists (i.e. Illuminati) continue to rule, humanity will continue to spin its wheels.

—-
Next time: Kabbalah and the Messianic Age, 2012, and the Kabbalah’s coming New Age Utopia.

[5] Marranos and Sabbateans: A Reexamination of Charismatic Religiosity, Ezer Kahanoff