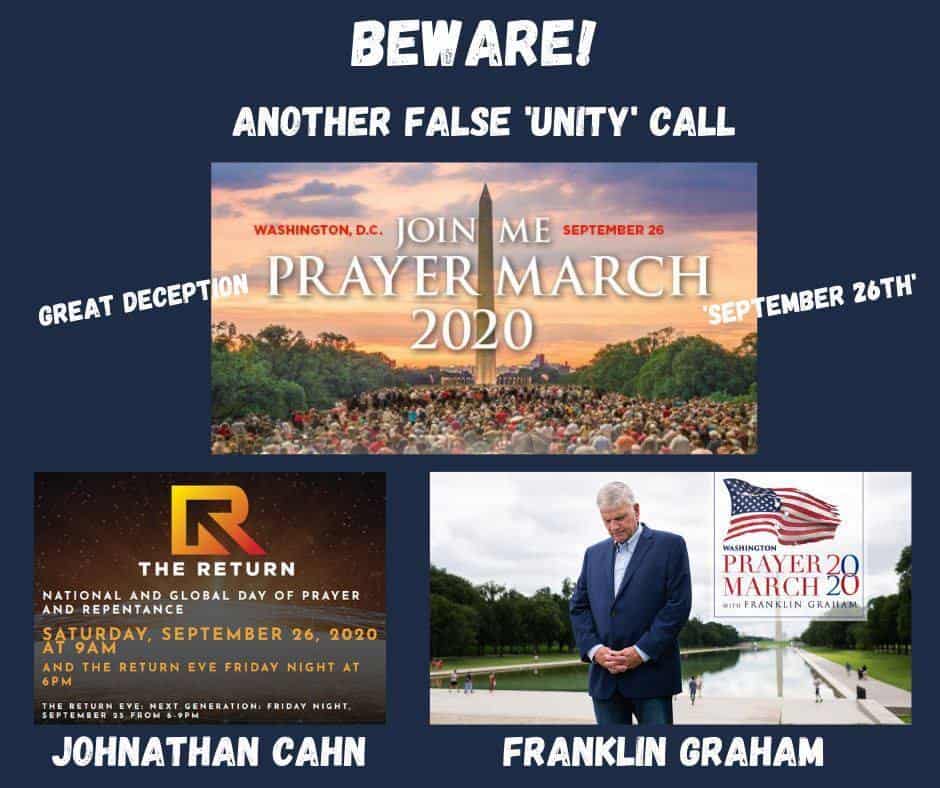 “Have you been watching ‘The Return?’ Hope swept over her face as the conversation with my neighbor abruptly shifted from the sad state of the world and the mask-wearing deception to the estimated 5 million believers marching at Capitol Mall.

At least half a dozen thoughts raced through my mind. Where to begin? How to address Ecumenism, Dominionism, the HRM, how the church-at-large is embracing the very New Age teachings that were meticulously laid out to destroy her, without coming across like an overly critical shrew?

Whispering a quick prayer, I decided on Ecumenism as my launching point. It’s pretty easy to point to the “protest”-ant reformation of the Catholic church, I thought. There was a reason for the protest. That much went smoothly. She was with me for a bit, but then the all too familiar glaze fell over her eyes as I went from the Vatican to the Ecumenical Franklin Graham carrying on the work of his father, the late Billy Graham, darling of Christiandom. I’d gone too far, tipped the sacred cow. The conversation was over.

I didn’t hear a peep about it on the news, but to be honest I don’t watch the news. My husband does, and he didn’t hear a peep about it. That silence won’t be lost on the silent majority and it’s all part of the plan. As the social engineers left hand of is putting out films like “Social Dilemma”, labeling anything outside mainstream media as “fake news” – their right hand is stirring a very calculated rebellion.

I only caught parts of the event, but my heart sank as I watched as 5 million people, most of them church going born again Christians, cheering on the false prophet Jonathan Cahn. And as Ricky Skaggs sang “Nothing but the Blood of Jesus!” the camera panned to (Mormon/Freemason) Glenn Beck swaying in worshipful stance and singing along.

“But they’re all singing about Jesus. What’s wrong with that?”

Friends, there’s a whole lot wrong with it. A complete lack of discernment and uniting the church of Jesus Christ with the doctrines of demons just for starters. More on that later. For now, here’s an excellent video about The Return event by Youtuber E511 Ministries.

I’ll end this with some thoughts on the event by researcher Cheryl Devine Tummalo before the event on Sept.26th;

“My spirit is feeling heavy today. …The Return. It’s not only a ‘National’ day but a ‘Global’ day, that is being broadcasted live. This event is not only about prayer and repentance as stated on their website. It’s about an ‘awakening’ a ‘great revival’. The Bible doesn’t speak about a great revival but a great falling away. Yet so many ‘Christian’ leaders have been pushing for this great revival for a long time. We should be aware that the word revival can be substituted with awakening, resurrection or rebirth. Is this ‘revival’ that they speak of leading to the One World religion acceptance. For a new age, a new era?

False prophet Johnathan Cahn will be giving a ‘Prophetic’ word to America. He said God told him months ago to plan for this date. Which happens to be 40 days until the election. He’s trying to use the story of Ninevah, that the Father only gave them 40 days until they would be overthrown. Stating that we are at the point of no return. Thus the name ‘The Return’.

Yeah remember the Shemitah year, and the economic collapse ‘great shaking’ that didn’t happen. And in 2016 he partnered up with Kenneth Copeland, that snake. Well, you can do your homework on those two. And Glenn Beck (Mormon and Free Mason) is in full supporting this event as well. Just saying!

After ‘The Return’ event, then the Prayer March with Franklin Graham will take place. They will be stopping and praying at the Lincoln Memorial, the WWII Memorial, The Washington Monument, the White House, the National Museum of African American History & Culture, and the U.S Capitol.

Their prayer focus when they get to the Washington Monument is. “Well, let’s call it what it is, the Obelisk, for sun worship, to honor satan…”Salvation of the lost, renewed strength in our families, solutions to the coronavirus pandemic, and an end to abortion.” Really?! So “Christians” are going to gather with Franklin around the Obelisk to pray to the to Father, the Most High, about these issues. The Father told us in His Word….”And ye shall overthrow their altars, and break their pillars, and burn their groves with fire; and ye shall hew down the graven images of their gods, and destroy the names of them out of that place. Ye shall not do so unto the LORD your God.” Deuteronomy 12:3-4 This truly is an abomination to Him no matter how much you try to sugar coat it with “Christianity”.

I’m sharing this to remind you to use caution with who you are listening to. Not every one who claims to be a ‘Christian’ is a faithful believer. And BEWARE of the word ‘Unity’. It most likely means a unity that leads to ecumenicalism. Franklin said “This is a march to show Unity. We are all doing this together.”

Yes, the country is divided, the whole world is divided, and that’s by design. So that the people will beg for unity. And a false dangerous ‘Unity’ will come.
Why do I say that, because that is what his father ‘Billy Graham’ was doing. He was a friend of the Popes and helping to push for ecumenicalism. And now Franklin is following in his father’s footsteps, just a bit more quietly.

In an interview with Katie Couric on NBC television on April 2, 2005, Franklin Graham praised the late Pope John Paul II and claimed that they preach the same gospel. Graham said: “We disagree on a lot of doctrinal issues and I guess those disagreements will always be there. At the same time we did agree on the fundamentals that Jesus Christ is the son of the living God who came to this earth to die for our sins and when he died on that cross and shed his blood he took the sins of the world with him on the cross; and if we confess our sins and repent and by faith receive Christ into our hearts God will forgive us and cleanse us. These are fundamentals of the faith we agreed on and support and we APPRECIATE this man and the stand he has taken on so many of these moral issues.”

Did you hear that, we APPRECIATE THIS MAN. What part of Protestant does Franklin not understand!. The protest is NOT over Mr. Franklin!

Even as of 2015, on his own Facebook he wrote…..“I appreciate the Catholic Church remaining very strong on moral issues through the years, and I pray they will be immovable on teachings of the Bible,”

He knows very well that the Roman Catholic Church is far from biblical teachings. He is just another Catholic wooer.

And he even praises George HW Bush…..

During another TV interview after the passing of George Bush Sr. Franklin Graham went on and on about how wonderful this man was, stating he was kind and gentle and REFLECTED THE LIFE OF CHRIST. Wow! Most of us know that George HW Bush was a skull and bones member, who spoke of building the New World Order over and over! And not just talking about it, he promised that it would happen. Your telling me that Franklin doesn’t know this? Sure!

He also spoke of how his Father, Billy Graham would go to the White House and stay up all night together praying with George. We ALL know that Billy Graham was satan’s tool in building the religious unity arm of this New World Order. You could sit on YouTube all day long watching videos exposing Billy Graham.

Remember, Franklin has taken over for his father, he is the President and CEO of Billy Graham Evangelistic Association.

I also find it hard to believe that Franklin doesn’t know what the Washington Monument represents. Every time I see “Christians” grouped together around that Obelisk, I just cringe.

“Obelisks are erect phallic (penis) symbols related to the Egyptian Sun god, Ra. The four sides of the Washington Monument are aligned with the cardinal directions (i.e., east, west, north, and south). At the ground level each side of the monument measures 55.5 feet in width, which is equal to 666 inches each side. The height of the obelisk is 555.5 feet, which is equal to 6,666 inches. *From the ground to the apex is 555 feet – BUT – the underlying base extends down 111 feet. Do the math.* THIS IS THE EXACT RATIO OF KING NEBUCHADNEZZAR’S GOLDEN IMAGE! (which was 90 x 9 feet, a 10-to-1 ratio).” American Digital News. 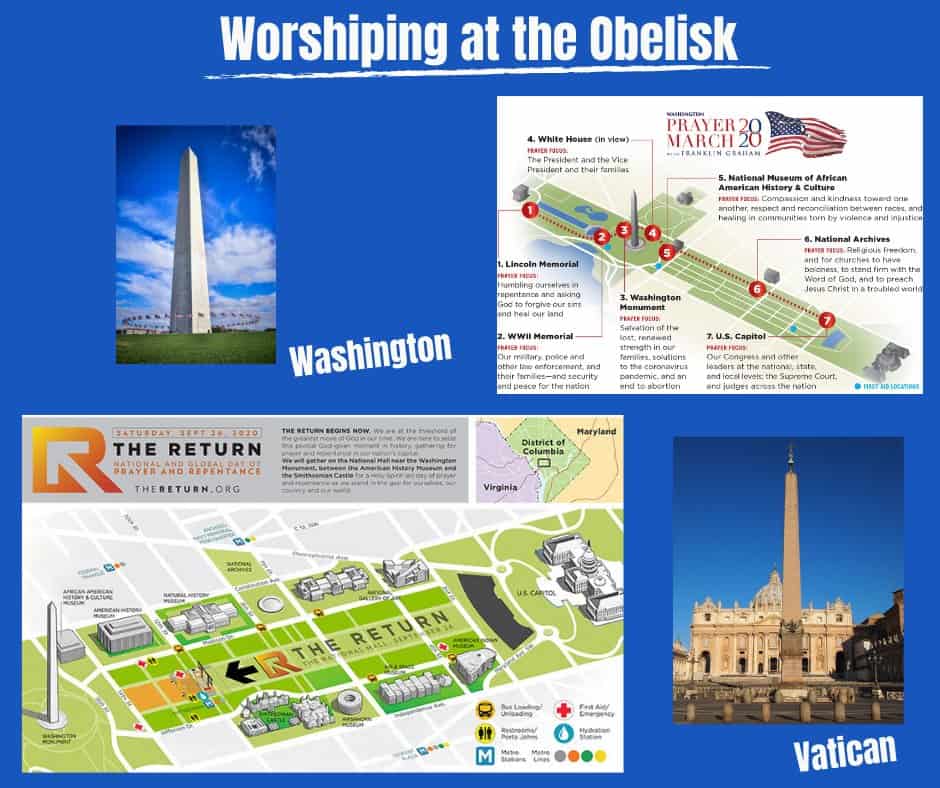