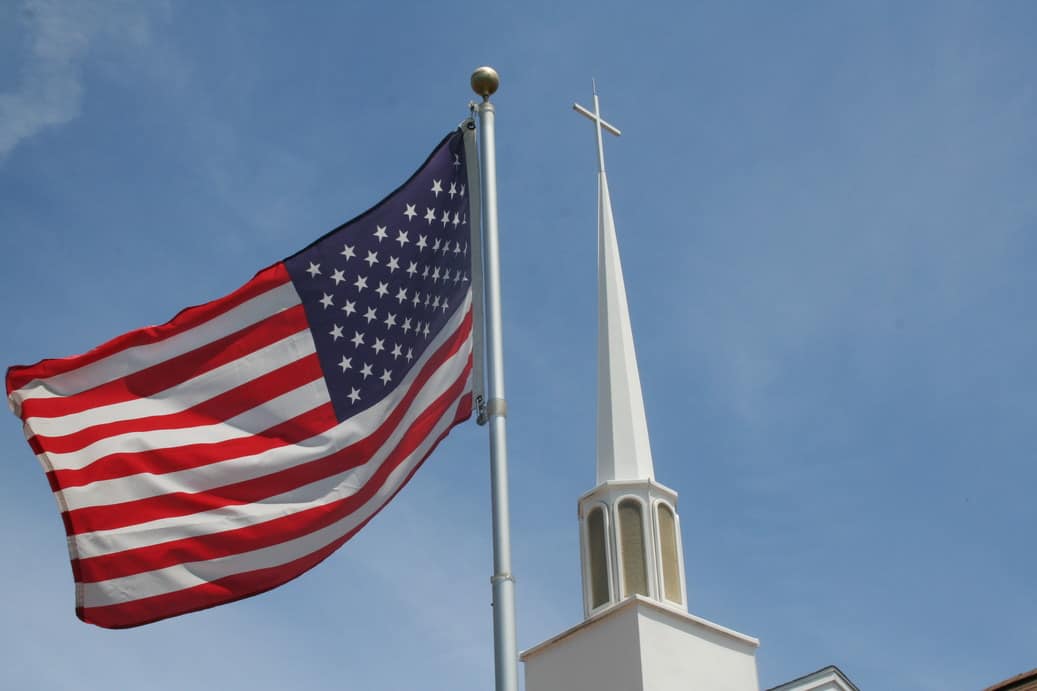 There is NO DOUBT in my mind that the biggest failure in America is the establishment church. It’s a bigger failure than even the federal government. Now that’s saying something.

No people in Church history had been given the rich heritage of the churches of America. The Church of America was birthed by the courage and sacrifice of men such as Jonas Clark, John Peter Muhlenberg, James Caldwell, Joab Houghton, et al. These men stood in the gap and rallied the Christians in Colonial America to dispose of a tyrannical British Crown and to help create a land of liberty such as the world had never before seen.

Alas, the courage of the patriot pastors of Colonial America has been forgotten; their sacrifice wasted. Everything they purchased with their dynamic and powerful preaching has been squandered by generations of gutless, ear-tickling men-pleasers in these entertainment playgrounds known as churches. What a waste!

However, as far gone as we are, if even a significant percentage of the 300,000-plus evangelical churches (not to mention Catholic, Episcopalian, etc.) would stand up NOW and begin sounding the clarion call of national repentance and constitutional liberty, the ship of state could yet be turned around. But there is NO SIGN of that happening. NONE!

At this point, it does seem obvious that the vast majority of pastors in America are content to allow this country to nose-dive into destruction without as much as a whimper. Again, what a waste!

It is one thing to be born in an enslaved country with the weight of the state forbidding public dissent or freedom of assembly, worship, and speech. It is one thing to be born with the shackles of bondage firmly fastened around your neck from the time of your entrance into the world. It is another thing altogether to be born in a land of liberty where one’s ancestors broke the shackles of tyranny at the cost of their very lives–thus allowing us to live in a land where the freedom of dissent, the freedom to elect our civil magistrates, the freedom of speech, assembly, and worship (not to mention the freedom to keep and bear arms) are sacrosanct–only to then turn around and squander our liberty and to allow would-be tyrants to take it from us without a fight. What a waste! What a horrible, terrible, awful waste! And that is exactly what the last few generations of so-called “preachers” have done.

Truly, “Ichabod” is written over the establishment church in America. And, as a result, “Anathema” is being written over the entire nation. I am convinced that any spiritual renewal that might still come will mostly bypass America’s establishment churches and will be carried by nontraditional, non-aligned, unincorporated, unaffiliated–maybe even underground–fellowships. This is what is currently happening in communist–and other–oppressed countries. And America is fast becoming an oppressed country.

In fact, if the pastors in America had even a fraction of the man-stuff that the pastors in Colonial America had, they, too, would be sounding the clarion call of independence and secession. Like King George’s England, Washington, D.C., has become a corrupt cesspool of wickedness that is using every means possible to wrap its tyrannical tentacles around every State, city, hamlet, and village in the entire country. At some point, the only options freedom-loving people in this country will have are slavery or secession. And that point may come a whole lot sooner than most of us expect.

So, what has happened to the Church? How did our pastors become so timid? How could the direct descendants of the Pilgrims, Puritans, and Patriots become so cowardly? Here are the reasons:

1. The Church, which is the Bride of Christ, entered into an adulterous relationship with Caesar when it put on the state’s official wedding band: otherwise known as the 501c3 non-profit, tax-exempt organization status. At that moment, it became a “creature of the state” and left the sanctity of its spiritual wedding to Christ. That happened in 1954. In just a little over a short half-century later, the Church has lost, not only the virtue of its own spiritual institution, but also the virtue of the most fundamental institution of all: Holy Matrimony.

Yet, instead of sounding forth the message of truth regarding this attack against Western Civilization itself, our pastors stand mute and apathetic, holding onto their precious tax-exempt status with their last waning breath. In practice, our pastors are saying exactly what the Pharisees said in Jesus’ time: “We have no king but Caesar.”

2. The heretical misinterpretation of Romans 13 that teaches Christians must submit to civil government “no-matter-what.”

This fallacious doctrine has damned America. Our pastors and churches are following the Nazi playbook verbatim. True resistance to evil must, by nature, come mostly from spiritual sources, because the battle between good and evil is mostly a spiritual battle. Therefore, it is obligatory that our spiritual leaders be the ones leading this battle. Alas, for the most part, this is not happening.

In the name of Romans 13, our spiritual leaders have abandoned the battlefield. They have sounded retreat. They have waved the white flag. They have capitulated. They have surrendered. And the enemy has taken the field.

I submit that at the judgment bar of God, these squeamish milquetoast preachers are going to have to apologize, not only to Clark, Muhlenberg, Caldwell, and Houghton, but also to every courageous man and woman throughout history. Think of Gideon and Samson and Samuel and David and Vashti and Esther and Daniel and Micaiah and Jeremiah and Shadrach, Meshach, and Abednego. Think of Simon Peter and James and John, and even Paul, the man who penned Romans 13. Think of the Anabaptists, the Waldensians, the Protestant Reformers, and the martyrs of the Dark Ages. Think of the Scots and Irishmen and Americans. Think of the persecuted people of Tibet and Burma and Sudan and Saudi Arabia and China and Palestine. Think of the millions of people throughout the centuries who stood against oppressors and tyrants of all stripes and types–be they political, religious, or military–and said, “No!”

I say again: what a waste!

Men such as Joel Osteen are Pied Pipers of a sleep-walking church whose music is only serving to march these unsuspecting souls into the gulags of a modern inquisition. Yet, these sycophants lead the largest churches in the country.

“Like priest, like people.” People have heaped to themselves teachers having itching ears. They have sown to the wind, and they are reaping a whirlwind. They are like the Israelites of old who refused to listen to God’s prophets and, instead, gave heed to the hireling-prophets of Ahab.

4. Then, there are the folks who think they must help God fulfill Bible prophecy.

First, there is Mr. Warmonger himself: John Hagee. This man, and thousands like him, have convinced their churches that they must help God establish His Kingdom on the earth. They have appointed themselves judge, jury, and executioner of all things pertaining to the Middle East. Their loyalty does not reside in America; it resides in the modern state of Israel–a nation that has absolutely NOTHING to do with Biblical Israel. Their erroneous interpretation of Genesis 12 has created a climate of war and hatred that is tearing the soul out of America. All of these perpetual wars that are being fomented in the Middle East are done in the name of Genesis 12, in much the same way that our domestic internment is being facilitated in the name of Romans 13.

Secondly, there are those well-meaning Christians (I think) who actually believe it is their God-ordained duty to do nothing to resist evil.

I received this post on my Facebook page just this week: “None of these things [the evil, calamitous things happening to our country] could have been prevented, nor should they have been. All these things must come to pass before the Lord returns. In this world, nations rise and nations fall, and this one just happens to be falling right now. Praise God! I praise God for the destruction of this evil nation! I wish the Lord would return right now! But unfortunately, he will not return until ‘everything that must happen, has happened.’ The sooner these things happen, the sooner the Lord can return.”

I wonder if this Christian gentleman is going to be praising God when his children or grandchildren are put to the rack or his mother and father are tortured or his wife and sisters are molested and ravaged.

Yes, I realize that our sainted forebears often endured the most hideous treatment with spiritual and moral courage, but no one in their right mind would wish such treatment on their loved ones–especially if they had the power to prevent it. This man rejoices over his country’s destruction? This man is NOT in his right mind. The prophets of old wept over the destruction of their beloved nation. Jesus wept over the impending destruction of the city of Jerusalem.

But this is the kind of rationale one gets from these pastors and churches who use the Scripture to brainwash people into attitudes of fatalism. They are the ones who become nothing more than their own self-fulfilling prophecies. They stand back and do nothing and then claim to praise God when their own indifference grows into their own destruction. Such people are NOT in their right minds.

When America is lying in the graveyard of history, the epitaph on its tombstone will read, “Here lies the United States of America: killed by the apathy and indifference of its pastors and churches.”

As I again reflect on the giants who thundered forth liberty from the pulpits of Colonial America, and I see the behavior of so many of our pastors today, I can only repeat: What a waste!