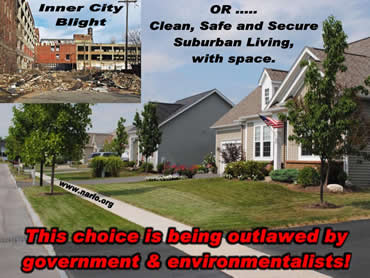 In a little over 230 years, Americans conquered half of the North American continent at great risk and began to spread out. The massive land areas they tamed were equated with freedom, freedom to move freely, freedom to raise your own food and be self-sufficient and independent and freedom to engage in farming, ranching, mining and building homes and raising families. Until the industrial revolution, America was an agricultural and a free nation.

All that changed when larger-than-life industrialists learned how to forge steel in vast quantities from coal and iron ore that built locomotives, railroads,bridges and buildings and drew people off the farms for factory jobs, giving rise to growing population centers. But large population centers began to eat away at the freedom Americans once equated with space.

Part of the evolution of the industrial age was the scourge of technological advances and changes in markets, leading to large factories going out of business, which then led to massive unemployment, urban poor and urban blight. Detroit is a glaring example. The urban poor do not have the “space” to raise crops to be self-sufficient and independent. They could not feed their families and had to call on government for help when the jobs dried up.

But alas, many people still wanted their space because they equated that space with their freedom, as they had for over 150 years. They started spreading out into the areas around the urban population centers to escape the urban poor, urban blight and urban crime.

Large houses were built on large lots that gave the people that space they craved and allowed their children to grow up in clean, low-crime neighborhoods. The paved streets, sidewalks, houses and yards were well kept through pride of ownership. This image of suburban living became the American Dream.

The only draw back was, that the people had to drive their cars into the big cities for the jobs that existed there, until the jobs and the stores and shopping began to move out to the suburban areas.

SIDEBAR: We were developing land in the suburban areas around Seattle during the socialist bussing movement of the 1980’s. Most of the people that purchased our 2.5 and 5-acre tracts were escaping Seattle bussing.

But during the 1960’s the environmental movement was gaining ground in America, initiated by the passing of the National Environmental Policy Act of 1969. The premise was and still is, humans are a scourge on the planet and must be rigidly controlled. In fact, the United Nations policy on land ownership essentially states that all land must be owned and controlled by government to protect the environment. The environmentalists hailed the policy and new buzzwords entered the vernacular; words like smart growth, sustainable development, along with social and environmental justice.

We once asked seven environmental groups what “sustainable development” meant and we got seven different answers.

To protect the environment, according to this radical environmental ideology, endorsed by mostly liberals, people must be herded, stacked, pushed, cajoled, bunched, stuffed and crammed into big cities in high rise apartment buildings where they take buses, mass transit, or their bicycles to work and shopping, to allegedly protect the environment.

Suburban sprawl became a pejorative and was soundly berated by the environmentalist and government, parroted by academia and the news media. If you lived in suburbia, you were vilified for taking up so much of the earth for your large lots and big energy guzzling homes and your cars, but mostly your cars.

“In many developing countries, urban sprawl comprises two main, contrasting types of development in the same city: one is characterized by large peri-urban areas with informal and illegal patterns of land use. This is combined with a lack of infrastructure, public facilities and basic services, and often is accompanied by little or no public transport and by inadequate access roads.”

“The other is a form of “suburban sprawl” in which residential zones for high and middle-income groups and highly-valued commercial and retail complexes are well-connected by individual rather than public transport.”

“Urban sprawl adds to the urban divide, pushing social segregation along economic lines that result in spatial difference in wealth and quality of life across various parts of cities and metropolitan areas, run down inner cities and more suburbs.”

“Suburbanization in developing countries happens mainly because people – rich and poor – flee poor governance, lack of planning and poor access to amenities. “In a nutshell: sprawl is a symptom of a divided city,” the report says.”

“Urban sprawl involving the poor occurs because authorities pay little attention to slums, land, services and transport. Authorities lack the ability to predict urban growth and, as a result, fail to provide land for the urbanizing poor. In addition, the urban poor are denied land rights which is one of the main factors driving people to the periphery of towns, associated with urban sprawl in developing countries.”

“Other features typically associated with sprawl include overdependence on personal motorized transport coupled with a lack of alternatives, limited housing options and urban spaces that discourage pedestrian traffic. Most South African cities are an example of this. They are expanding primarily through development of new housing areas which, being located beyond the existing urban periphery, are relatively unplanned. As a result, the urban periphery consists of pockets of housing developments that are isolated and separated from each other by trunk roads or open spaces.”

“Urban sprawl has a negative impact on infrastructure and the sustainability of cities. In most cases, sprawl translates to an increase in the cost of transport, public infrastructure and of residential and commercial development. Moreover, sprawling metropolitan areas require more energy, metal, concrete and asphalt than do compact cities because homes, offices and utilities are set farther apart.”

“In many places, urban sprawl encourages new developments that cause significant loss of prime farmland. When cities are improperly planned urban sprawl also adds to environmental degradation. Such is the case around several cities in Latin America where sizeable damage has been caused to environmentally sensitive areas.”

Are you getting this radical environmental, socialist picture? It “ain’t”American freedom folks!

This flawed ideology, that is in direct conflict with America’s foundation of liberty, property rights, led the Sierra Club to come up with optimum densities of urban centers equaling up to 50,000 people per square mile, or a little over 78 people per acre. Densities like this don’t exist in some of the largest cities on the planet.

But here are the facts. Look at the map!

Does this map of urban centers portray a serious impediment to wildlife?

The urban centers in America take up only 2.62% of the land mass. Agricultural areas take up another 44.7%, leaving over 50% of the landmass for wildlife. The Census Bureau reports that 94.6% of the U. S. is rural open space. Ladies and gentlemen, how much open space does the wildlife need to survive?

But suburban sprawl, according to these groups, is taking up more land that the animals and animal habitat should be able to occupy, while they cram (force!) people into denser and denser populations, where anti-social behavior, urban mental problems, urban poor, urban blight and urban crime are a direct result of those densities.

Are you aware that it is much easier to control people in large urban centers than it is to control people living in rural areas? Now do you get why government and environmentalists want to cram you in concrete and steel jungles that tower into the skies, with high crime, high noise levels and little open space?

National and international environmentalists have come up with even more draconian policies to relieve you of your property rights and force you into big cities. They invented UN biospheres that include all of the national parks in America. Parks are great, but, through legislation, they ringed the biospheres (parks) with three large tiers of buffers. God help you if you live near or adjacent to biospheres, rivers, lakes, or scenic and designated heritage areas. Just ask the people who live in the Columbia River Gorge between Washington State and Oregon about what they can and can’t do with their land.

But there is more. The biospheres have to be connected with wildlife corridors and the environmentalists have a plan on how to connect those biospheres that include conservation easements, scenic rivers and heritage sites and even eminent domain. If you own private property in their way, the environmentalists sue the government and have the government force you out of the way.

Man-caused global warming is the environmentalists’ other tool to protect the environment by regulating you to death, taxing the Hell out of you and relieving you of more of your freedoms.

Talk about brainwashing, indoctrination and fear mongering! National and international elitists, money changers, power brokers, the United Nations, Europe, socialists, radical environmentalists and the one-world-order crowd, aided and abetted by academia and a news media that has lost any semblance of journalism ethics, have perpetrated one of the greatest frauds in the civilized history of mankind. But worse, the American government, at every level, (who is supposedly constrained by our Constitution) and every American politician who espouses, supports or endorses this nonsense, is complicit in this fraud.

Little kids are scared to death that the boogie-man of man-caused global warming is going to flood their homes, kill their parents and leave them destitute, hungry, homeless and all alone ….. or dead.

Disenfranchised and unrepresented rural American landowners have lost virtually all of their property rights, due to draconian environmental land use regulations ….. regulations that are based on another fraud, that we must protect every damn wetland in existence today, even if the wetland was caused by man in the first place.

It is a fraud for one very basic reason that no one ever mentions. Just a short 10,000 years ago in geologic time, one-third of the Earth’s surface was covered by an ice sheet over one mile thick. Underneath that ice there were no lakes, streams, rivers, or wetlands and there was little to any wildlife. Somehow the Earth managed to survive without all those wetlands and it will continue to survive whether we save wetlands or not. In fact, the Earth will even survive the miniscule effect that mankind inflicts upon it.

As we stated earlier, man’s footprint on the North American Continent is less than 3% of the total land mass and that footprint took over 200 years to materialize. Don’t you think that if that footprint rose to say 5% or even 8% over the next 200 years, there would still be a whole lot of land left for the wild creatures and all their little creatures?

The following sources were used in the construction of this article.