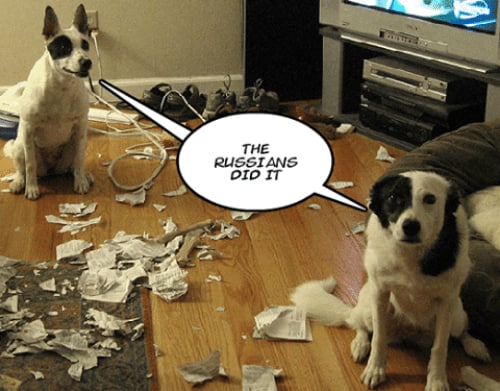 The desperate flailing of mainstream-media continues as they forge ahead with their “fake news, blame the Russians” narrative.

According to the Washington Post, Express UK and BBC, the Russians are ‘risking death!’ and “spreading DANGEROUS child vaccine LIES on social media!”

The main stream propagandists are alleging that RUSSIAN HACKERS are using fake social media accounts on hundreds of alternative media sites to “spread potentially deadly lies about child vaccinations as part of an ongoing effort to destabilise the West.” source

As Mike Adams of Natural News says, “You can’t make this stuff up.”

Displaying a complete lack of Journalistic professionalism, no clinical studies are cited to support vaccine safety (they don’t exist) or their hysteria-inciting claims.

According to the articles, researchers at George Washington University found that

“3 percent of all tweets about vaccines were made by Russian ‘bots’.

The Express article continues, stating that,

“The academics also found that in addition to the bots, human run Russian accounts, which often impersonate people in the UK or US, have been deliberately spreading disinformation on vaccines.

“Russian online trolls have been accused of interfering in elections before, including the 2016 US Presidential election and the 2017 UK general election, but this is the first time it’s been proven that they’re also targeting health care.”

To instill terror into the hearts of young parents, they falsely report that:

“Parts of Europe are experiencing measles outbreaks which are being linked to enduring public suspicion of the MMR vaccine.”

Read more about it on Natural News