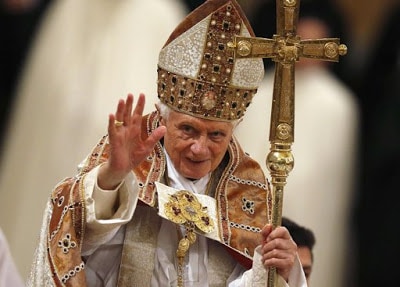 If we are to converse meaningfully about the subject of ecumenism, we must define our terms so we can know we are talking about the same thing. We need definitions for the following: ecumenism; ecumenical; modern ecumenical organization; ecumenical movement.

Ecumenical Can Be a Good, Useful Term

Any activity that encompasses the world or involves the inhabitants of the world can be described as ecumenical. Of course, the prime example is the spread of the Gospel to the whole world, according to the Great Commission of our Lord. The First Century Church so evangelized their world that Paul could write to the saints in Rome that the Gospel had gone to the ends of the oikoumene (Rom. 10:18). The term can also be used in a secular sense with no undesirable implications, such as an ecumenical conference on world hunger.

When Ecumenical Becomes a Dangerous Term

The claim is made that this is to answer Jesus prayer in John 17:22. While Webster does not have be concerned about the definition of Christian and unity, we do! The fact is that the current ecumenical movement always brings together some who are true to the doctrines of the Word of God with some who are not. There is no Christian unity where there is not unity in the faith once for all delivered to the saints (Jude 3).

The True Body of Christ IS In Unity

In His prayer Jesus specified the kind of persons who can be in unity as He is in unity with the Father (John. 17:22b). He made clear the desired unity would be a spiritual unity (17:5; 10:30), unity in Truth (17:17), and in agape Love (17:23,26). The fact that seems to be commonly overlooked is that Jesus’ prayer HAS ALREADY been answered and continues to be answered until He claims His Bride.

The world sees hundreds of denominations; God sees the One Church, the Body of Christ, which includes some from many denominations. The only way to be in the true Church is to be placed into the Body of Christ by the Holy Spirit in regeneration: …the Body is one .. . .all the members are one . . .for by one Spirit we were all baptized into one Body (1 Cor. 12:12-13). You are all one in Christ Jesus (Gal. 3:28).

The original unity of the Church was gradually broken by heretical teachers and their followers as recorded, for example, in Jesus’ letters to the seven churches (Rev. 2-3). Jesus warned five of the churches He would be leaving their midst if they did not repent. Would an ecumenical conference have helped them? It would only have ensconced them more deeply in their backsliding. The ONLY way the whole Body of Christ can again have visible unity before the world is for all to be of the same doctrine and experience as that first church.

The Wrong Kind of Unity

The modern ecumenical movement is promoted generally by the World Council of Churches and the Roman Catholic Church. It gets most of its momentum from the Roman Catholic Pontifical Council on Ecumenism. Their PURPOSE wasverbalized succinctly at Vatican II.

Speaking of dialogue with separated brethren, the following plan was recorded: The results will be that, little by little, as the obstacles to perfect ecclesiastical communion are overcome, all Christians will be gathered, in a common celebration of the Eucharist, into the UNITY OF THE ONE AND ONLY CHURCH (Documents of Vatican II by Flannery, p. 456).

The World Council of Churches has contributed to the breaking down of doctrinal standards for many denominations and has promoted the ecumenical movement; however the WCC is now drawing closer and closer to the Catholics because the Roman Church has AUTHORITY, vested in an infallible pope.

When Nehemiah was leading God’s people in the rebuilding of the walls, his archenemies Sanballat, Tobiah, and Geshem saw the Jews’ success. When they could not stop the people of God, they tried another ruse. They sent an invitation to Nehemiah inviting him to dialogue in the plain of Ono. Nehemiah said, “Ono? Oh, no! I am doing a great work so that I cannot come down” He knew their PURPOSE was evil; he stayed the course and was successful (Neh. 6:1-15).

Pentecostal denominations in general, and the Assemblies of God in particular, have experienced great success as defined scripturally. Now the Sanballats and Tobiahs want to dialogue. The ecumenical movement is led by a Church that admittedly plans to bring all other churches under its control.

For example, Father Ray Ryland, a professor of theology at Franciscan University in Steubenville, OH, works with Coming Home Network, an organization whose purpose is to draw in separated brethren. In an article in THIS ROCK, March 2000, he explains how Catholics are to carry out Vatican II’s ecumenical agenda, both covertly and overtly. He writes, “The goal of Catholic ecumenism is to restore unity to the separated traditions by bringing them within the unity of the Catholic Church.”

Coincidentally, Franciscan University is administering an ecumenical event for June 22-25, 2000, called “Celebrate Jesus 2000.” It is sponsored by the North American Renewal Service Committee (NARSC), an ecumenical organization bringing together many Charismatics, Third Wavers, and Pentecostals from many denominations.

It is essential that we remember the Roman Catholic priests who participate have an agenda. If they were not loyal to the pope in his encyclical Ut Unum Sint (That They May Be One), they would not remain priests. Pope John Paul II is not a Charismatic, but he is willing to “tolerate and use” those who speak in tongues to accomplish his nefarious purpose. Let the sheep be warned, and let true shepherds be alert.

The Assemblies of God Has Spoken 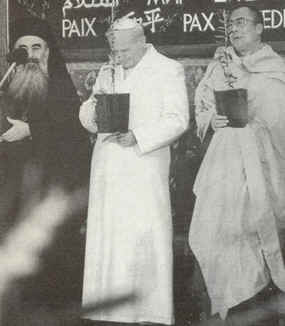 By definition, NARSC is a modern ecumenical organization and Celebrate Jesus 2000″ is an ecumenical conference. “Celebrate Jesus 2000” covers the ecumenical agenda under the umbrella of common Charismatic experience. However, spiritual experience ALONE can never be the basis for unity. Unity must be based on sound DOCTRINE. “If anyone comes with another doctrine, do not receive him….for he who greets him shares in his evil deeds” (2 John 10,11).

Peter was a Spirit-filled Pentecostal (or Charismatic if you choose) when he began to side with the Judaizers in their legalistic heresy; Paul rebuked him publicly for his hypocrisy (Galatians 2:11-16). Roman Catholic dogma promotes the same kind of legalism Paul anathematized. Peter repented; thus good fellowship was preserved in the unity of the faith (Acts 15: 7-11; 1 John 1:7).

If Jesus had been ecumenical, He would have lovingly dialogued with the Jewish leaders who loved God (as they defined God) and were totally engrossed in doing good, just as are the leaders of the ecumenical movement today. He would have practiced reconciliation with all who named the name of Jehovah, and He could have escaped the Cross.

Just one problem: where would we be if He had? If Paul had been ecumenical, he would never have rebuked Peter or pronounced God’s anathema on those who preached “another gospel”! In fact, he would not have been arrested and sent to Nero if he had only practiced reconciliation with all who claimed to be Christians. If Paul were alive today, he would again rebuke those teaching wrong doctrine regardless of their spiritual experiences. 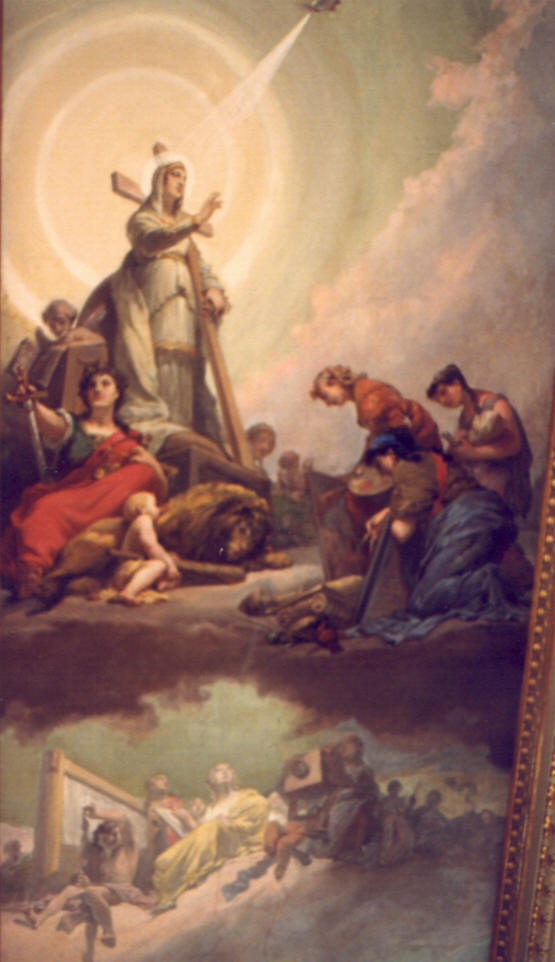 The fact that some Catholics speak in tongues proves nothing except that if the glossolalia is genuinely given by the Holy Spirit, then He will lead them away from error to Truth. When they insist on the biblical doctrine of salvation through Christ’s finished work of Calvary, with absolutely no necessity for the RCC sacraments, they will be excommunicated if they do not leave of their own accord. Mormons also speak in tongues. How long before we unite with them? Their doctrines are not much farther away from orthodoxy than are those of the RCC.

Anyone can by reading the latest Catholic Catechism (1995) see that all the heretical teachings of past centuries, plus some new ones, are there: the placing of ultimate authority in CHURCH TRADITION and the Papacy rather than in the 66 canonical books of the Holy Bible; the sacramentalism of the Church as necessary to salvation; Transubstantiation, i.e., the receiving of grace by partaking of the Eucharist which is claimed to be the real body and real blood of Jesus; Mariolatry with prayers made to Mary everywhere as if she is omnipresent; Purgatory which most must endure before going to be with the Lord; and Indulgences for future sin.

Check this book out of your library and read it for yourself. Roman Catholic theology presents another Gospel (Gal. 1:1-9) and another Jesus (2 Cor. 11:4). The hypocrisy of the leaders in the Catholic Charismatic movement is seen in bold relief by the fact that they deny the Eucharist (the Lord’s Supper or Communion)even to those they wish to unite with at ecumenical celebrations. I sent an e-mail to the Franciscan University connection asking, Will there be a celebration of the Eucharist at Celebrate Jesus 2000′? I received a reply, Yes, for the Roman Catholics in their one separate morning meeting.

I then asked, “Why cannot the others participate if all are celebrating the same Jesus?” I received no reply to that. The correct answer would be, they are not celebrating the same Jesus. They celebrate a Jesus Who must die daily; they crucify Him afresh in each Mass. True Christian faith rests in the Lord Jesus Christ Who said, “It is finished!” and arose to prove it.

There is a line of cleavage forming in Christendom. Reverend James Bridges, General Treasurer of the Assemblies of God, stated to a meeting of leading A/G educators:

There are many putting down denominations today, but I would rather have the multiple denominations which have emerged out of the Reformation, than be held in the bondage of a Roman colossus that continues to keep its devotees in superstition, ignorance and spiritual darkness. Beware the ecumenical movement afloat today lest when the new garb is removed it shows itself to be the same old bondage (personal file).

NOW is the time to pray and to speak; if we are silent, we can lose our doctrinal integrity. Our Lord is Truth, a Person; the Bible is Truth, a book. The Holy Spirit brings them together in our genuine experience! The current ecumenical movement is antithetical to our Lord’s commission to preach the Gospel to every creature.

We know too much and have been given too much to think of surrendering to the spirit of ecumenicalism. The eternal destiny of millions of people rests in our hands; if we are not true their blood will be on our hands. History will record your decision. What legacy will you bequeath to your children and their children? We must be true at any cost!