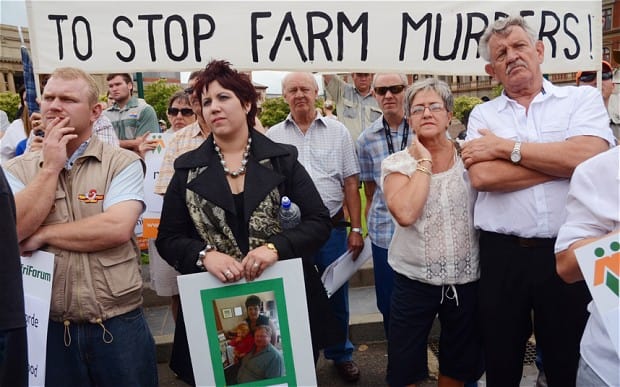 Across the country whites -again- are slowly waking up to the call for white Nationalism- waking up and start to heed to their mysterious age-old call to unite the tribes around their Bibles and their God like they did three times before. Across the land they start preparing themselves for their second Exodus from oppression to seek a new beginning where their old people, women and children could be safe. Whites in South Africa are getting frustrated- they are getting angry. Normally these people are very tolerant- but their tolerance has been tested for too long by the communist regime of Mandela, Mbeki- and Zuma. They have been oppressed too much, murdered for too long- incarcerated too much,impoverished enough,- their mothers, wives and babies killed too many times- and now they are threatened that they will loose their land as well. The communists are nearing a very dangerous threshold- a very thin borderline where they are going to overstep that line sooner or later.

History showed us that there is no nation – not even the most powerful rulers in the world like China, Britain and Russia- that could beat the Boers in any war.They were only twice defeated through treason from within their own ranks….but NEVER in the field. As for the communists beating them in any war- is something out of the question that even the ANC know – which will result in a a destruction of their throne and maybe the end of their reign. The Boers are very, very dangerous when on the war path- and maybe the ANC have sunken into false misconception that they have disarmed and oppressed that nation enough to “control ” them. That is one fact the Zuma communists have not learned as yet- the most POWERFUL nations – even the global powers- could not achieve THAT victory- and neither will the ANC. The Boers cannot be “controlled. ” They are a free rebellious nation that do not kneel before foreign gods. As it is- Zuma and his communist Jew cohorts are about to find that reality out soon enough and if they just carry on a little bit more on the road they currently take- a paradox will be inevitable.