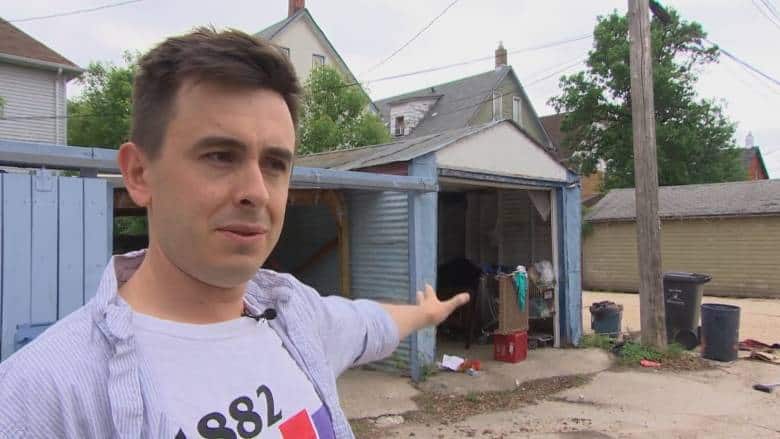 Patrick Michalishyn, 30, above, found squatters in his garage.

Henry presents the agenda behind our cities being overrun with homeless and migrants.

The relative comfort and peace that Americans and Canadians have lived under for more than a generation has dulled their ability to imagine anything this sinister. More are waking up recently as it becomes more brazen, but at this point the minimum it would take to stop it is an enormous public outcry…

Unfortunately, I suspect that’s part of their plan…

Extrapolating from a minor incident.
Connecting the dots.

What would you do if you found homeless people living in your garage?

This was the predicament fellow Winnipegger Patrick Michalishyn, 30, faced Wednesday when a young woman made a home in his garage. He gave her some food and asked her to leave.

Instead, when he came home from his all-night job as a DJ at a university radio station, there were three more squatters living there. They had bunk beds, mirrors, shopping carts etc.

He didn’t call the police because he “wanted them to be helped, not hassled.” Instead, he called numerous social agencies, most of whom passed the buck. Finally one took an interest.  I am waiting to hear what happened.

CANARY IN THE COAL MINE?

This story caught my attention because it might be a harbinger. As an isolated incident, it seems trivial but in context, it may foreshadow something more sinister.

Normally Winnipeg has a plague of cankerworms. This year the homeless are more visible than ever. They have set up campsites along the river and in parks leaving garbage and feces. A church had to ask the police to remove a campsite on its doorstep.  See also.

Many homeless suffer from mental health issues and drug problems. A social worker friend says meth heads often rent an apartment, refuse to leave and drive out other tenants.  His agency had to hire a security guard to police a “safe space” designated for them. 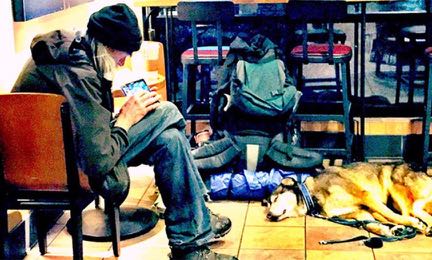 Starbucks has a new policy of letting the homeless hang out at their cafes and use the facilities and Internet without making a purchase. However, no sleeping or drug use will be permitted. No word about panhandling.

Corporations are taking stands on a variety of issues.

Starbucks recently closed their 8000 US stores to re-educate their employees about “racial bias.” The NFL did irreparable damage by allowing players to kneel during the National Anthem as a protest. Other corporations promote homosexuality (“pride”) and transgender bathrooms going so far as boycotting states that don’t fall into line.

These political stands are all consistent with the globalist Communist agenda of the satanist Central Banking Cartel. This agenda is to destroy the foundations of human identity: nation, race, religion, and family (gender.) The corporations are all dependent on banks, and the banks are
franchises of the Rothschild Money-Spinning cartel. So it makes sense that corporations like Starbucks are complicit in imposing a form of Communism on the West. 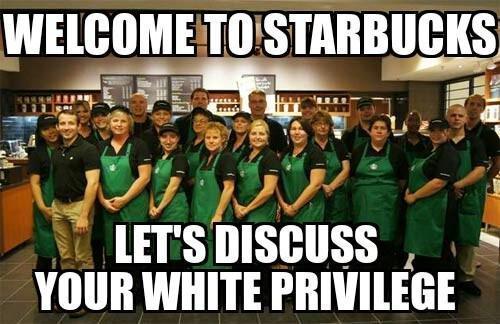 This is not conjecture. George Soros and other banksters are literally behind Starbucks’ new policies:

“The organization conducting Starbucks’ racial sensitivity training, The Perception Institute, receives “generous” contributions from globalist kingpins George Soros and the Ford Foundation. With campaigns such as “Black Male Re-imagined,” The Perception Institute aims to put an end to accusations of discrimination after a Starbucks worker called police on two black customers. However, with such “generous supporters” as the Ford Foundation, the W.K Kellogg Foundation and Open Society Foundation, chaired by Soros, Starbucks’ obsession with race is about to hit high gear. Soros and the Ford Foundation, for instance, have been behind such racial initiatives as the Black Lives Matter movement, which nurtures a black people versus police mentality, and ignores police violence against other Americans. As other companies follow suit, The Perception Institute will ensure racial division remains a key part of your coffee-buying experience.”

Part of this process of satanic possession (human dispossession) is to impose discordant and dysfunctional elements on society. The homeless are a variation on migrants. Migrants are not going to assimilate. They are being used to threaten and undermine mainstream society.

During the Russian Revolution, the Bolsheviks let all the criminals out of jail, and they proceeded to rob, kill and rape. The Deep State is controlled by the bankers who will cultivate any disgruntled minority as a club to be used against European culture. Look at the knife attacks and terrorism in Europe. Look at the rape gangs that are allowed to prey on young girls.  Look at the “knock out” game. 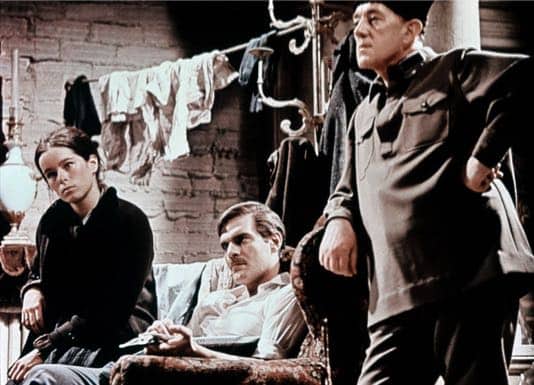 There were reports from Germany and Sweden of citizens being asked to give up their homes to migrants. Irish are urged to house “refugees” in their spare rooms.

Remember the scene in Dr. Zhivago (left) when the good doctor returns home to find that the Communists had settled strangers in his house?

Don’t think for a minute that the Masonic bankers give a damn about blacks, migrants, women, the homeless, homosexuals, and transgenders. They are Satanists!  They use minorities, the poor, sick and dysfunctional to control, degrade and dispossess society for their own benefit. They cultivate sickness.

The social work industrial complex is set up to help the unfortunate. We pay taxes for this. Yet it seems to be benefiting social workers the most. Migrants and homeless are slipping through the cracks.

The banksters are empowering the “have-nots” to dispossess the haves. I have as much compassion for my fellow man as anyone. I want everyone to prosper in their own home or nation. I am looking at an agenda which seeks to exploit the unfortunate in order to dehumanize, enslave and dispossess us. This is what Communists do.

Naturally, I would like to be wrong but Patrick Michalishyn’s dilemma seems to epitomize subtle but ominous social changes.

What would you do in his position?  I would call the police. These people are trespassing. They are not puppies. They must take responsibility for their lives. Society has innumerable programs to help them. Rather than enabling sickness, failure, and dysfunction, we should require people to stand on their own two feet.