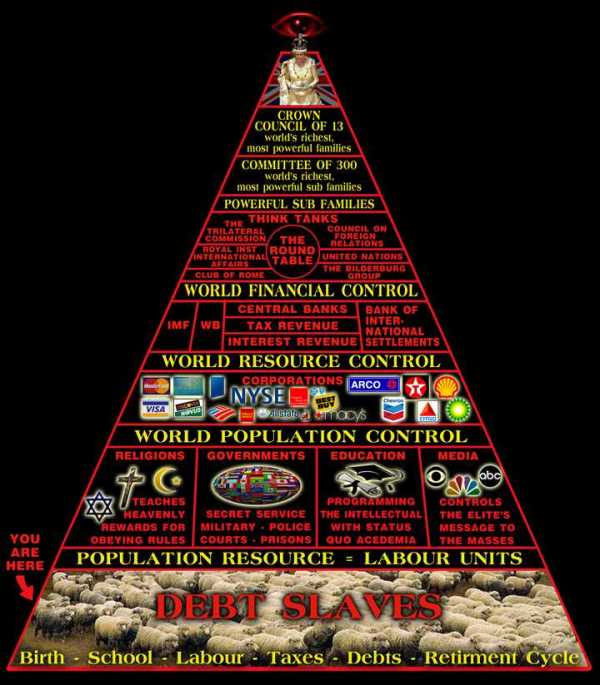 William Cooper’s 1998 MajestyTwelve broadcast: One of the most frightening
things you’ll ever hear. We are victims of an elaborate deception.
The US is already a defacto fascist dictatorship run by masonic Satanists
lurking behind a facade of freedom. The foundations for a totalitarian
communist world government are already in place. Those who cannot accept this
“paradigm shift” will be exterminated.

Our political and military leaders are members of this cult — traitors.
The UFO/ET phenomenon, including Rosswell, is a long term government psy op designed to trick humanity into accepting a “Messiah”- like ruler. The Apollo moon missions were faked.

When Cooper was employed by US Naval intelligence, (he was mistaken for a Freemason) and had access to the Illuminati’s top secret plans, dubbed “MajestyTwelve.”  I don’t want to believe what Cooper is saying, but I find it very credible.

Many years ago I had access to a set of documents that I eventually realized was the plan for the destruction of the United States of America and the formation of a socialist totalitarian world government. The plan was contained within a set of Top Secret documents with the title “MAJESTYTWELVE”. The term honored the planned placement of ultimate power in a body of wise men who are destined to rule the world as the disciples of a Messiah front man. This Messiah will serve as a buffer between the wise men and the sheeple. I discovered these documents between 1970 and 1973 while I was a member of the Intelligence Briefing Team of the Commander in Chief of the United States Pacific Fleet. The plan outlined the formation of a world totalitarian socialist government. It is to be ruled by a behind-the-scenes council of wise men. A so-called benevolent dictator, will be presented as the Messiah.

The Constitution for the united States of America and its Bill of Rights will be scrapped. A parliamentary form of government will take its place. All military forces and individuals are to be disarmed except for an internal police force which will carry only the minimum weapons needed to maintain internal order. The only military force will be a world police force under the United Nations in sufficient numbers with state-of-the-art technology so that it can field overwhelming force against any perceived threat to the world supra government – see State Department Publication 7277. The military of the united States of America is currently filling the requirement. The senior officer corps of all of our military forces have betrayed their oaths of allegiance to the Constitution and have joined the conspiracy. They are turncoats who are actively engaged in High Treason.

The source of this conspiracy will be found in the body known as the Illuminati. It is made up of the highest adepts of the combined total of the so-called fraternal orders and secret societies. They are bound together by blood oaths, a secret religion, and the promise of an elite status within regional government, or the world supra government. Their religion is based upon the Kabbalah, the Luciferian Philosophy, and the worship of the Sun. They are not bound by any oath or allegiance save their own. They are loyal to no government or People save their own. And they are Citizens of no country save their already in place secret world government. In their own words, “If you are not one of us you are nothing.” To garner some sense of “feel” for the concept see the movie They Live.

“It is a largely ‘open’ conspiracy, in that much of its membership, structure, methods, and operations, are matters of public record, however scattered and obscure. Its manner of coordination is atypical. Two nuclei – the elite core of the Wall Street clique (orbiting the House of Rockefeller) and the elite core of the European financial clique (orbiting the House of Rothschild) – coordinate this global conspiracy by waging psychological warfare on the rest of the conspirators, telling each no more than is necessary for him to fulfill his designated role, often with explicit recognition neither of his role, nor of the unarticulated rules that govern him. Thus, the overwhelming bulk of the conspirators do not know, but only suspect, that they are part of and in service to ‘a power somewhere so organized, so subtle, so watchful, so interlocked, so complete, so pervasive, that they had better not speak above their breath when they speak in condemnation of it” (quoting Woodrow Wilson).

You cannot hope to understand the philosophy (Illuminism) of any branch of the “Mystery School” (Illuminati) without many years of study and a complete knowledge of their “symbolic” language. You must understand that like many other organizations they attract those who completely miss the boat… or are just too stupid to “get it”. When an individual joins a branch of the “Brotherhood,” by any name, Freemasonry, Theosophical Society, Anthroposophic Society, Fraternitis Rosae Crucae, Knights Templar, Sovereign and Military Order of the Knights of Malta, or any other fraternal order or secret society, no one ever sits down with them and explains the meaning of anything. An actual literal esoteric education would be too dangerous. It could result in a public expose’… something which the Illuminati must avoid at all cost. But to give those who might understand a shortcut… Illuminism is COMMUNISM.
—————