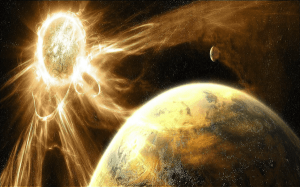 How much more evidence do we need to conclude that covert aerosol spraying of geoengineering chemicals is the man-made CLIMATE CHANGE to fear most?

“Over a year ago geoengineeringwatch.org reported on the extreme UV radiation levels that were already occurring around the globe due to the ongoing climate engineering. Many in academia flatly disputed our reports in spite of the fact that all of our data was and is based on actual metering with state of the art meters. The disinformation also did their best to dispute our reports but their attempts failed miserably. Now, finally, confirmation has come from a peer reviewed report. So far the science and media gatekeepers have not let any significant information get out about the Northern Hemisphere ozone catastrophe, but they won’t be able to hide the unfolding cataclysm for much longer.” (More)

Is it an accidental, is it incompetence or is it deliberate eco-terrorism?

Clarification of the term “stratospheric cooling”:

“Ozone absorbs solar UV radiation, which heats the surrounding air in the stratosphere. Loss of ozone means that less UV light gets absorbed, resulting in cooling of the stratosphere.” (Weather Underground) .

NASA Earth Observatory: “With regard to plants, UV-B impairs photosynthesis in many species. Overexposure to UV-B reduces size, productivity, and quality in many of the crop plant species that have been studied (among them, many varieties of rice, soybeans, winter wheat, cotton, and corn). Similarly, overexposure to UV-B impairs the productivity of phytoplankton in aquatic ecosystems. UV-B increases plants’ susceptibility to disease. Scientists have found it affects enzyme reactions that conduct fundamental biological functions, it impairs cellular division in developing sea urchin eggs, and it changes the movements and orientation of tiny organisms as they move through ocean waters. Since some species are more vulnerable to UV-B than others, an increase in UV-B exposure has the potential to cause a shift in species composition and diversity in various ecosystems. Because UV-B affects organisms that move nutrients and energy through the biosphere, we can expect changes in their activities to alter biogeochemical cycles. For example, reducing populations of phytoplankton would significantly impact the world’s carbon cycle, because phytoplankton store huge amounts of carbon in the ocean.”

” In fact, phytoplankton off the California coast sometimes turn out to be more susceptible to UV-B radiation than phytoplankton in Antarctica, to the surprise of biologists.” (Result of aerosol Geoengineering?)

So, when damaging UV-B radiation reaches earth’s surface the result is:

If Aerosol Geoengineering is Known to Destroy the Ozone Layer to Increase Damaging UV-B Radiation Why Don’t They Stop Spraying?

In 1963, respected meteorologist Harry Wexler suggested the arctic regions could be warmed more quickly by using aircraft to spray chlorine or bromine into the stratosphere to destroy the ozone layer. (source)

Most people have no knowledge of the long history of projects to create deliberate global warming including plans to melt arctic ice as a documented goal of geoengineers beginning in with the formation of Standard Oil in Ohio in 1870. (More)

Since the mid 1990′s, ground observers all over the planet have witnessed chemical aerosol deployments by the same high flying aircraft suggested by Wexler. Is this just a coincidence?

Today, satellite images clearly document deployment of aerosols and associated electromagnetic stations in the arctic and over every continent on earth. (More)


How much more evidence do we need to conclude that covert aerosol spraying of chemicals from jet aircraft is a deliberate act of climate and eco-terrorism?

Ozone Destruction as Warfare by Eco-Terrorism

After Wexler suggested chemical aerosols could be deployed by aircraft to achieve ozone destruction the military expressed interest in waging geophysical warfare by attacking the ozone layer over rival nations.

Seeking advice on how to cut a “hole” in the ozone layer, Wexler turned to chemist Oliver Wulf at Caltech who suggested thatchlorine or bromine atoms might act in a catalytic cycle with atomic oxygen to destroy thousands of ozone molecules. James Fleming – Harry Wexler on Geoengineering and Ozone Destruction, page 6

From the Arctic Monitoring and Assessment Programme

“Another major factor affecting climate is stratospheric ozone. Stratospheric ozone is an important indicator, as well as an agent, of climate change. Stratospheric cooling, a direct result of what is generally referred to as global warming, allows for increased ozone destruction in the Arctic. As an absorber of solar radiation, ozone partly controls the temperature structure of the atmosphere, influencing dynamical as well as thermal properties of the atmosphere.

Ozone depletion is an increasing concern in the Arctic as anomalously low levels of ozone have been recorded in recent years.(Covert aerosol geoengineering?)

The Scientific Assessment of Ozone Depletion:

“1994 concluded that ‘Chlorine- and bromine-catalyzed ozone loss has been confirmed in the Arctic Winter’ (WMO 1995). The destruction of ozone increases UV radiation at the earth’s surface, making ozone critically important to the well-being of the biosphere and human health.

The increase in UV has become more significant since evidence shows that changes in UV levels due to ozone depletion can be large, particularly in spring-time. Elevated UV levels adversely affect aquatic and terrestrial ecosystems, as well as humans.

A combination of high early-summer biological activity and changes in UV levels makes the Arctic an area where ozone depletion may have notable effects in the near future. Many questions remain which need to be addressed.

Little effort has been expended to study the effects of UV on the Arctic biosphere, including human health, although the International Arctic Science Committee concluded in 1995 that ‘There is a pressing need to quantify ozone-dependent UV-B effects on diverse Arctic ecosystems under their current conditions.”AMAP Assessment Report – Climate Change, Ozone, and Ultraviolet Radiation, Page 718

Mutually Assured Destruction is a doctrine of military strategy and national security policy in which a full-scale use of high-yield weapons of mass destruction (WMD) by two or more opposing sides would cause the annihilation of both the attacker and the defender. M.A.D. is based on the theory of deterrence where the threat of using strong weapons against the enemy prevents the enemy’s use of those same weapons. The strategy is a form of Nash equilibrium in which neither side, once armed, has any incentive to initiate a conflict or to disarm. (Wiki)

From all indications, the M.A.D. doctrine appears to be in full deployment as geoengineering takes the planet down with Weather of Mass Destruction

The US, UK, EU, China, Russia, most of South America, Australia and NATO countries appear to all be cooperating in M.A.D. But is it a strategy of brinksmanship between countries or a vast conspiracy of cooperation among nations ultimately controlled by the ruling class of global oligarchs?

Originally envisioned as protection against an all-out nuclear holocaust, the “W” in WMD now appears to be “Weather” of Mass Destruction.

Originally, the M.A.D. concept was intended as a deterrent against a sudden conflagration of preemptive nuclear attacks likely to spark a planetary holocaust as an extinction level event.

The advent of weather weapons has not necessarily changed the outcome, but only set the planetary annihilation of M.A.D. in slow motion where elitist perpetrators will have time and resources to carve out relatively comfortable end-game survival.

The concept of New World Order envisions a central globalist government and central bank with no national boundaries. A global framework without borders sets the stage for the elite to regard everyone else as the virtual “enemy” if they get in the way of exploiting natural resources regardless their country of origin or it’s increasingly irrelevant sovereign authority.

Instead of sponsoring wars of annihilation between nations, the NWO version of M.A.D. contracts the military industrial complex to develop weapons that increasingly target locations of economic interest regardless the nationality of the populations that once could have laid claim to the natural resources. Targeting civilians instead of army-against-army is consistent with post industrial age warfare where a country’s strength moved more towards it’s ability to produce manufactured goods. Attacks on manufacturing resources and innocent populations became the new combat method to undermine civilian morale and economic trade.

Today, one of the most obvious areas of economic interest by New World Oligarchs is the domination of the global food supply with the help of Monsanto. Suicide seeds are now mandated by many nations as a designated food supply policy regardless the protests by citizens and farmers in those countries. Intrusion by Monsanto’s global corporocracy into a nation’s food supply is nothing less than a direct assault on the morale of a population of farmers and serves to increasingly undermine national sovereignty. (Source Watch)

Monsanto’s concentrated control over the seed sector in India (95% in cotton) as well as across the world is very worrying. This is what connects farmers’ suicides in India to Monsanto vs Percy Schmeiser in Canada, to Monsanto vs Bowman in the US, and to farmers in Brazil suing Monsanto for $2.2 billion for unfair collection of royalty.(Global Research)

The number of international migrants has been growing in the US and around the world.

Patriotism is increasingly set aside as ambitious workers find it relatively easy to relocate to more prosperous countries in order to send money home to their families.

The current issue of illegal aliens at the US southern border is sensational, but only represents a small part the global migration stampede. (Pew Research)