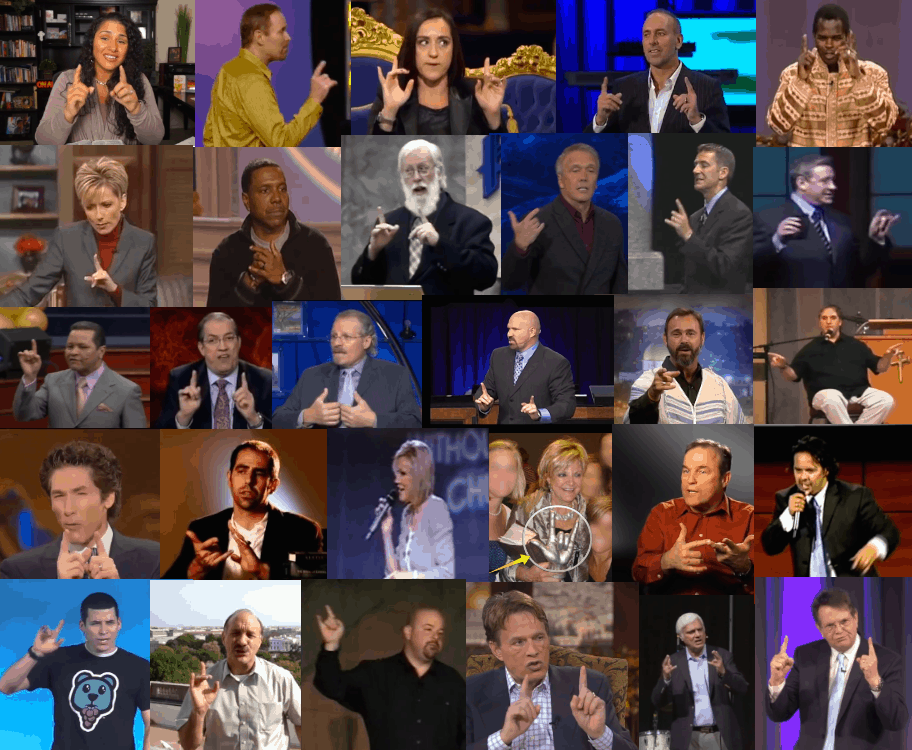 “if someone is promoted on clearly Zionist Illuminati TV/Cable Network (those who love the Zionist Israel and teach to support them), such as TBN, DAYSTAR, CBN, and ALL christian networks, and TV/Internet programs, such as “It’s Supernatural” by Sid Roth, and “This is Your Day” by Benny Hinn, and on YouTube, “Prophecy In The News” by Gary Spearman, without a doubt, he/she is one of them. Also they promote by magazines, such as “Charisma Magazine” and “Christianity Today,” so, if they are promoted by them, they are all in on it without an exception. It is simply because the Illuminati own ALL the media outlets.”
As my post “Where Should I Go To Church?” showed, there are problems (falsehoods) in all the major Protestant denominations that date back to it’s very beginnings. Some authors who are addressing this, including Renette Vermeulen (featured in the above article) believe that we should “come out from her” (Rev 18:4), leave the church and return to an individual faith, based solely on the Word of God, rather than continue to be misled. One thing I am sure of is that, as always, we should be aware, discerning, and prayerfully use our God given minds rather than going along with popular opinion.
This article by Olivet Journal exposes the depths of deception in modern Ministries and churches.
How Could All Ministries and the Church Be False? | Olivet Journal
Let me warn you …. that they are well trained professional con-men and women, actors, hypocrites, who deceive and swindle Christians and unsuspecting people for living. They make unbelievable amount of money taking from those people and live off of it, claiming that “The Lord blessed me!” And, they are extremely “organized,” behave in one accord, and are part of the worldwide Illuminati-Masonic system, which controls the WHOLE WORLD.
I have covered the deception of the Messianic and Hebraic Roots Movements quite a bit in the Judaism and Kabbalah series. They are all false and based on Kabbalah … no question about it. But, you might have been wondering … then, what about the other ministries? What about those who profess to be Christians, Protestant, Evangelical, Pentecostal, Baptist, Methodist, etc. etc.? … Are they also ALL FALSE?.
Please know this truth: The same enemy who have created the Messianic Jewish and Hebrew Roots Movements created the false church going back almost 2000 years. 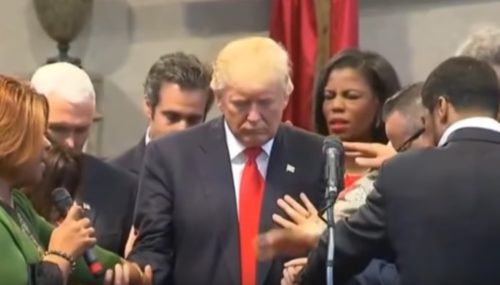 (Evangelical pastors “laying on the hands.”)
Yes. I have no problem asserting that ALL ministries that are very visible and well funded, that are eager to draw people into “movements” and “frenzies,” and that are Zionistic, are FALSE. And, that pretty much covers all the ministries we hear and see, doesn’t it? And please do not forget that, as I presented in False Ministries (1): on YouTube, many seemingly “individually” operating youtubers are also Illuminati-sent actors. Their teaching materials have all the signatures of the Zionist’s agenda and some images are very expensive and sophisticated to make for an independent ministry. It is very likely that they are provided by those who hired them, therefore; they must show their allegiance to their boss with Kabbalistic symbols and signs. The operation is massive and vast, and the deceivers come in all forms, so that there is a deceiver for every believer.
PROTESTANTS AND EVANGELICALS
In the late 1700s through early 1900s, the Illuminati began forming protestant denominations in more organized ways. Most famously, the Pentecostal Movement began as the Azusa Street Revival (1906 – 1915). Baptist denomination can be traced back to early 1600s in Amsterdam, but in North America, the First Great Awakening triggered and popularized it in mid-late 1700s. As we see today that the Kabbalists have been incessantly preaching the impending Third Great Awakening, the previous ones were probably instigated by them also. It has been a clear pattern that they create and use “revival” and “awakening” to draw people into their scheme and legitimize their false doctrines. Whether it is a form of Pentecostal or Baptist, or Messianic Jewish Movement … behind all these “Movements” … is the Kabbalist Illuminati.
So, naturally, all Bible colleges and seminaries that are associated with denominations were also established by Freemasons, and their insignias freely reveal it to us.
Then, in late 1700s, as Rothschild family was established as the first family, and the front, of the illuminati and they started taking over everything financially in Europe. At the same time, they clearly and intentionally planned to completely take over christianity through Freemasonry, and have it completely under their power. And they did it, of course, by way of deception and infiltration.
The 1800s was the time they gained so much and planned everything in detail. By then, probably, almost all the christianity related things were controlled by the Illuminati. The term, “Zionism,” was coined by Theodor Herzel, and was established as the NWO goal in late 1800s, and Scofield “Deception” Bible was published with teachings of Zionistic and Dispensationalistic Pre-Tribulation by this time ALREADY. Later, the Dallas Theological Seminary became the epicenter of this false teaching. 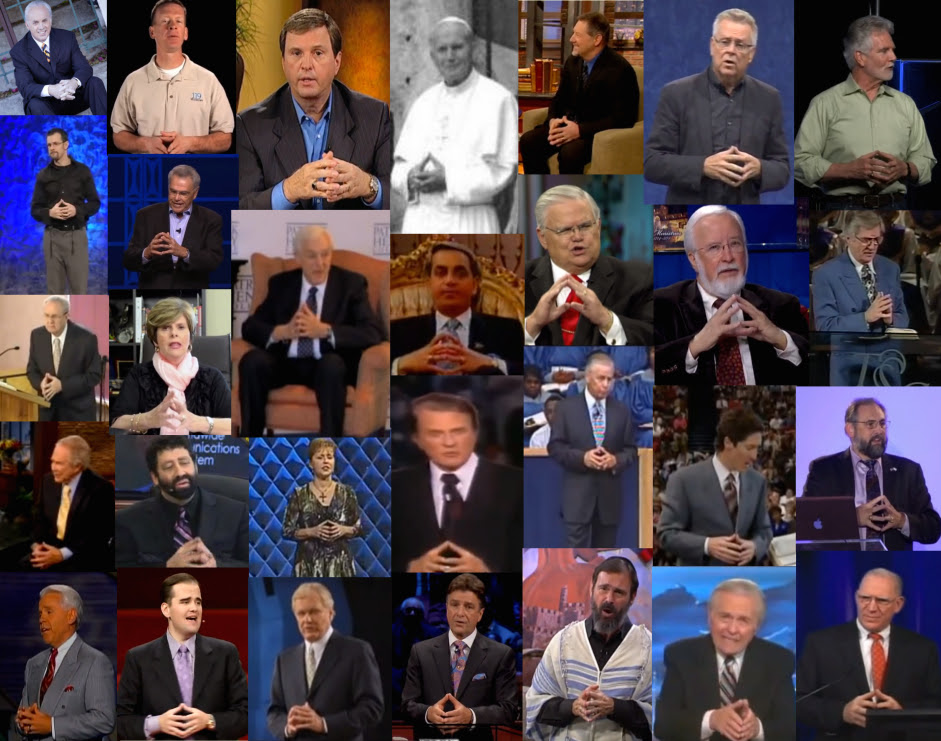 In and around 1920s, they were busy with establishing the multiple denominations through Freemasonry and pushing the dispensationalism, replacement theology, pre-tribulation rapture, and healing revivals, word of faith movement, and all those heresies. This means that ALL DENOMINATIONS ARE MASONIC. You can easily tell by their masonic logos. But, I must add that masonic ministries are not limited to denominational ones. (Scroll down here to see a dozen Evangelical preachers making Masonic hand signs.)
And, to conclude, everything that happened after that, such as healing revivals, word of faith movement, charismatic movement, Pentecostal movement, Vineyard healing movement, grace and “you cannot possibly sin” teaching, sweet Jesus teaching, nice and boneless christian teaching, “Jesus People” movement, Messianic movement, Hebrew Roots movement, and practically ALL christianity related so called “movements” were orchestrated, run, and controlled by the Illuminati Masonic power behind them. Right now, there is a few false “movements” going on, such as New Apostolic Reformation led by C. Peter Wagner, Purpose Driven movement led by Rick Warren, Third Great Awakening led by Dutch Sheets and many, and Emerging Church, Kingdom Dominion, Joel’s Army, etc. Of course, this includes the cone-head Nephilim craze, alien invasion theory, blood moon false prophecy, and other “nosies” on the YouTube too.
This applies to any self-proclaimed “Ministries,” small or large, because, UNLESS YOU ARE PART OF THEM YOU CANNOT BE APPROVED OR ALLOWED TO HAVE A PLATFORM ON TV, CONFERENCE, PUBLISHING, RADIO, MAJOR EVENTS, or any other christian activities. THEY OWN AND RUN EVERYTHING. Think about it … if all the churches are controlled, you cannot have a significant presence in it unless you know someone …. can you? It is run like a mob. And, if you preach or teach what they do not approve, or if you question what they do, you will be harassed, attacked, and bullied until you stop and disappear … or else. Even this humble blog and its Facebook Pages have been receiving fair amount of harassment. 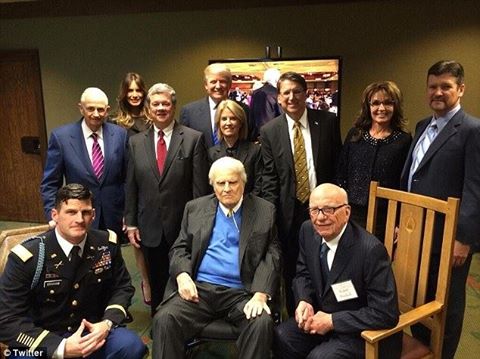 (The gang’s all here, for Billy Graham 90th bd. Graham a 33 o Mason. Note Trump in the rear.)
Here is another important truth: THEY ONLY PROMOTE THEIR OWN. Therefore, if someone is promoted on clearly Zionist Illuminati TV/Cable Network (those who love the Zionist Israel and teach to support them), such as TBN, DAYSTAR, CBN, and ALL christian networks, and TV/Internet programs, such as “It’s Supernatural” by Sid Roth, and “This is Your Day” by Benny Hinn, and on YouTube, “Prophecy In The News” by Gary Spearman, without a doubt, he/she is one of them. Also they promote by magazines, such as “Charisma Magazine” and “Christianity Today,” so, if they are promoted by them, they are all in on it without an exception. It is simply because the Illuminati own ALL the media outlets.
Yes .. all of them.
Therefore … only the small blogs and personal Websites are possible outlets for the truth, by the voice of some faithful servants who are called to tell the truth. Of course, there are many of those who are controlled but pretend to be innocent servants publishing on insignificant looking blogs … so we must be alert and watch out for the symbolism and other signs. As I said in many other posts, all the media and Internet are flooded by their agents. And literally ALL of the “ministries” are completely false.
This was a very rough and quick write up to give you some idea on this topic. But the message is extremely important … that is, ALL MINISTRIES and CHURCHES ARE FALSE, and at least ASSUME FALSE. They use those titles and names to legitimize their lies and assume authorities to tell you they are serving our Father, when those big ministries and organized religions are not biblical at all.
I must also tell you, however; that the whole thing of this deception, which you have just read, was approved and allowed to happen by our Father to test the last generation, us. We were to find Him and be faithful to the truth in this false church environment. But, what we are called to do now is to not be deceived and come out of her. This is our TEST to pass before His return.