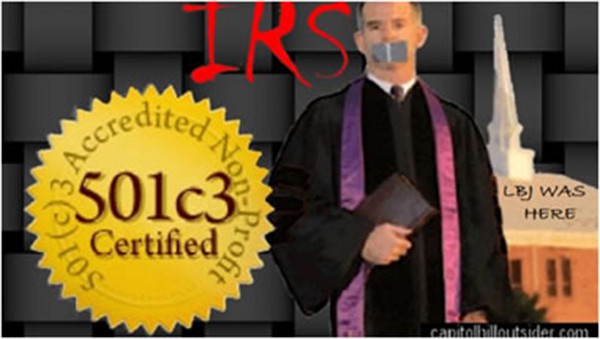 The mere fact that pastors refuse to address Biblical issues simply because someone deems those issues to be “political” and in violation of some governmental code reveals the pastor’s cowardice and self-absorption.

One might be surprised to learn that hundreds of Christian organizations (including Baptist) are uniting with Muslims and Jews (and people from other pagan religions). “What,” you ask, “could possibly unite such radically opposing faith systems?” The effort to convince the U.S. Congress to KEEP the Johnson Amendment, that’s what.

The Johnson Amendment is the amendment that grafted churches into the infamous 501c3 non-profit organization status of the Internal Revenue Code (IRC) back in 1954. The amendment is named after its author: then Senator Lyndon Baines Johnson (D-TX).

Faithful followers of my writings and messages might recall that on February 23 of this year, I predicted that the biggest opponents of President Trump’s proposal to expunge the Johnson Amendment would come from pastors and churches themselves. And I was right.

According to a report in Christianity Today, “Nearly 100 religious groups are urging Congress to keep the ‘Johnson Amendment’ which limits churches’ political activities.

“President Donald Trump has vowed to repeal the law which blocks ministers from endorsing political candidates from the pulpit or religious organisations from donating to either party. Many Republicans back him and argue the amendment infringes on religious groups’ free speech.

“But 99 different groups have written to oppose the move.

“‘The charitable sector, particularly houses of worship, should not become another cog in a political machine or another loophole in campaign finance laws,’ they write.

“The strongly worded backlash comes from across the religious spectrum from The Episcopal Church and Baptist groups to Catholic, Jewish, Islamic and Hindu movements.

“‘Current law serves as a valuable safeguard for the integrity of our charitable sector and campaign finance system,’ say [sic] in a letter to top members of Congress including Speaker Paul Ryan, House Democratic Leader Nancy Pelosi and chair of Ways and Means Committee Kevin Brady who previously [sic] repeal of the amendment would be included in tax-reform legislation.

“‘People of faith do not want partisan political fights infiltrating their houses of worship,’ the signatories, including the National Council of Churches and Islamic Society of North America, write.”

What a crock! Liberal pastors from a variety of Christian denominations promote their socialist agenda from the pulpits of their churches ALL OF THE TIME. And are we really expected to believe that Jewish synagogues, Muslim mosques, and Hindu temples do not promote the particular agendas contained in their sacred texts that affect their political, social, and cultural lives? Get real! These groups are not at all worried about politics “infiltrating their houses of worship.” They are neck-deep in politics. The only thing they are concerned about is making sure that they preserve their precious tax-exempt status.

The only churches that hide behind the Johnson Amendment and refuse to speak out on issues from the pulpit that might be deemed “political” are conservative and evangelical churches. Here is the cold hard fact of the matter: a good many of America’s pulpits are filled with raw cowards. And right now, they are able to hide their cowardice behind the Johnson Amendment–as if any true man of God can be muzzled by anyone or anything. The mere fact that pastors refuse to address Biblical issues simply because someone deems those issues to be “political” and in violation of some governmental code reveals the pastor’s cowardice and self-absorption.

But here is the section of the article that made me want to barf:

“They also warned the integrity of churches and other places of worship would be tarnished if they were tied to political campaigns.

“‘If houses of worship endorse candidates, their prophetic voice, their ability to speak truth to power as political outsiders, is threatened.

“‘The credibility and integrity of congregations would suffer with bad decisions of candidates they endorsed. Tying America’s houses of worship to partisan activity demeans the institutions from which so many believers expect unimpeachable decency.’”

Some of the biggest crooks, charlatans, criminals, and con artists in the world can be found inside America’s churches.

Give me a break! How could the reputation and integrity of churches be any more tarnished than they are already? Some of the biggest crooks, charlatans, criminals, and con artists in the world can be found inside America’s churches. And when is the last time you were ever in a church where you heard the pastor “speak truth to power as [a] political outsider”? Hardy. Har. Har. Har.

By contrast, virtually everything Jesus did was a direct challenge to both the political system of Rome and the religious system of Jewry. Virtually EVERYTHING He did. That’s why His death was a collaboration of both the Roman political system and the Jewish religious system. Similarly, virtually everything the early church did was a direct challenge to those same systems. True men of God and Christians throughout two thousand years of church history constantly challenged both the political and religious systems of their day. But what persecution, intimidation, coercion, and even execution could not do to silence the pulpit, Lyndon Johnson’s church bribe did–and did VERY WELL.

As soon as I heard Mr. Trump broach the idea of eliminating the Johnson Amendment, I KNEW that the biggest opposition to that idea would come from within the religious community itself. And it has. If the Johnson Amendment were eliminated, pastors would have no covering for their cowardice, so thousands of them are uniting with even pagan religions in an attempt to convince Congress to KEEP the Johnson Amendment intact.

As an aside, these cowering pastors should take a trip to several foreign countries where pastors and Christians put their LIVES in jeopardy every day by refusing to submit to some tyrannical government edict that attempts to restrict and restrain their preaching. One day the prophets, apostles, early Christians, and believers in persecuted countries today will stand as witnesses against these materialistic, cowardly American pastors at the judgment bar of God.

Then again, we cannot fault pastors without faulting the so-called Christians that sit in the pews, can we? Can one imagine what would happen in 95% of America’s churches next Sunday if the pastor got up and broached the idea of removing the church from the 501c3 non-profit organization status of the IRC? I dare say the pastor would risk being tarred and feathered.

However, many thousands of believers across the country ARE awakening to the unequal yoke of church and state in this, its true meaning. There are hundreds of non-501c3 churches and fellowships that are being established and hundreds of churches that have either removed themselves from 501c3 control or are in the process of doing so. Yes, “free” churches are springing up all over the country.

My Liberty Church Project (LCP) was created to assist pastors and laymen in establishing non-501c3 churches and fellowships. And if one is searching for a non-501c3 pastor, church, or fellowship, we have a list of such churches or fellowships on the LCP page.

The Biblical Law Center also helps pastors and churches in this regard:

My prediction: nothing will be done to expunge the Johnson Amendment; and no one will be happier than these cowardly pastors in America’s state-owned pulpits.
© Chuck Baldwin