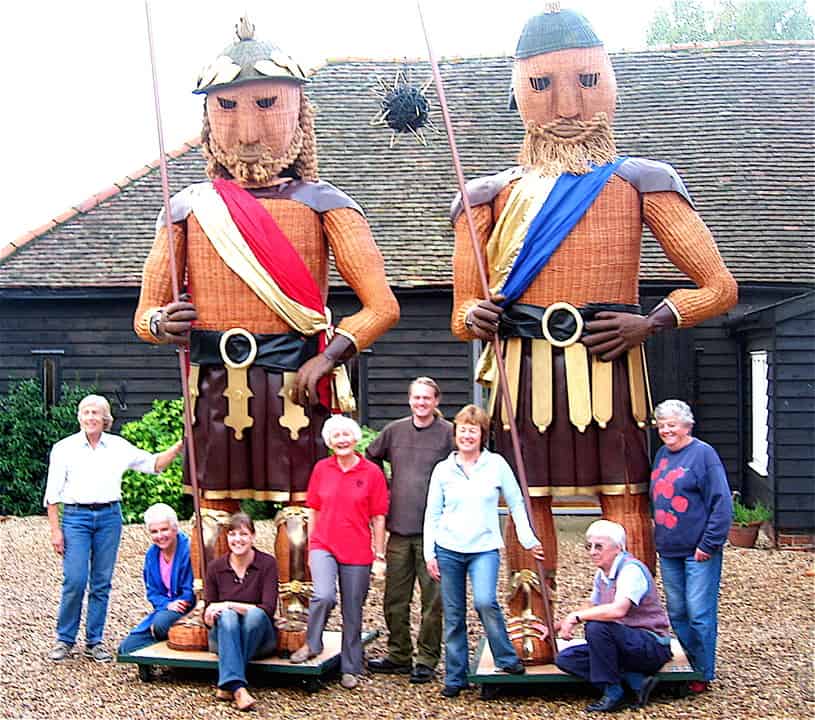 Question: How do the economy, Great Britain, Zionism, the Nephilim, and the NWO all tie together? Here are some clues. Did you know that “Gog and Magog”, two “mythical giants”, are considered to be the “patron saints” or “protectors” of the City of London, which is considered to be the “Vatican of the financial world”, is run by the Bank of England, and as such is a private corporation not subject to British law? Sounds a little like the Federal Reserve doesn’t it? Every year, on the second Saturday in November, statues of “Gog and Magog” are paraded through the streets of the City. Interesting. Question: Are Gog and Magog actually nephilim spirits?

“And when the thousand years are expired, Satan shall be loosed out of his prison, And shall go out to deceive the nations which are in the four quarters of the earth, Gog, and Magog, to gather them together to battle: the number of whom is as the sand of the sea. And they went up on the breadth of the earth, and compassed the camp of the saints about, and the beloved city: and fire came down from God out of heaven, and devoured them. And the devil that deceived them was cast into the lake of fire and brimstone, where the beast and the false prophet are, and shall be tormented day and night for ever and ever.” – Revelation 20: 7-10

The battle of Gog and Magog (also called Armageddon), is the last war or battle in the history of humanity….It takes place just before the end of time at the Second Coming of Christ….It can also be called the Last Great Inquisition.

Armageddon is also described symbolically in the Old Covenant Book of Ezekiel, where an ancient invasion of the restored state of Israel by a confederacy led by Gog and Magog is described:

And the word of JEHOVAH came unto me, saying,Son of man, set thy face against Gog, the land of Magog, the chief prince of Meshech and Tubal, and prophesy against him, And say, Thus saith JEHOVAH Elohim; Behold, I am against thee, O Gog, the chief prince of Meshech and Tubal: And I will turn thee back, and put hoks into thy jaws, and I will bring thee forth, and all thine army, horses and horsemen, all of them clothed with all sorts of armour, even a great company with bucklers and shields, all of them handling swords. (Ezekiel 38: 1-4).

“Gog and Magog, or sometimes Gogmagog and Corineus, are descended from mythical pagan giants and their origins lie in mediaeval legends of the early British Kings.” 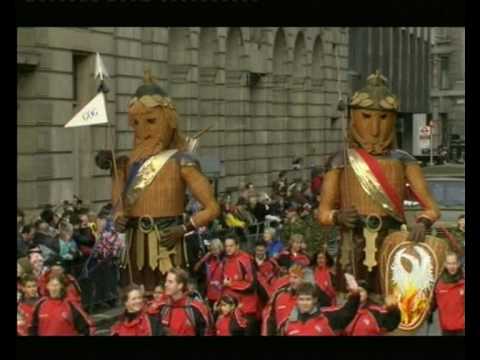 Conspiracy theorists like myself believe modern history reflects a long-term conspiracy by an international financial elite to enslave humanity.

The real villains are at the heart of our economic and cultural life. They are the dynastic families who own the Bank of England, the US Federal Reserve and associated cartels. They also control the World Bank and IMF and most of the world’s Intelligence agencies. Their identity is secret but Rothschild is certainly one of them. The Bank of England was “nationalized” in 1946 but the power to create money remained in the same hands.

England is in fact a financial oligarchy run by the “Crown” which refers to the “City of London” not the Queen. The City of London is run by the Bank of England, a private corporation. The square-mile-large City is a sovereign state located in the heart of greater London. As the “Vatican of the financial world,” the City is not subject to British law.

On the contrary, the bankers dictate to the British Parliament. In 1886, Andrew Carnegie wrote that, “six or seven men can plunge the nation into war without consulting Parliament at all.” Vincent Vickers, a director of the Bank of England from 1910-1919 blamed the City for the wars of the world. (“Economic Tribulation” (1940) cited in Knuth, The Empire of the City, 1943, p 60)

The British Empire was an extension of bankers’ financial interests. Indeed, all the non-white colonies (India, Hong Kong, Gibraltar) were “Crown Colonies.” They belonged to the City and were not subject to British law although Englishmen were expected to conquer and pay for them.

The Bank of England assumed control of the U.S. during the T.R. Roosevelt administration (1901-1909) when its agent J.P. Morgan took over 25% of American business. (Anton Chaitkin, Treason in America, 1964)

According to the “American Almanac,” the bankers are part of a network called the “Club of the Isles” which is an informal association of predominantly European-based royal households including the Queen. The Club of the Isles commands an estimated $10 trillion in assets. It lords over such corporate giants as Royal Dutch Shell, Imperial Chemical Industries, Lloyds of London, Unilever, Lonrho, Rio Tinto Zinc, and Anglo American DeBeers. It dominates the world supply of petroleum, gold, diamonds, and many other vital raw materials; and deploys these assets at the disposal of its geopolitical agenda.

Its goal: to reduce the human population from its current level of over 5 billion people to below 1 billion people within the next two to three generations; to literally “cull the human herd” in the interest of retaining their own global power and the feudal system upon which that power is based.

Historian Jeffrey Steinberg could be referring to the US, Canada and Australia when he writes, “England, Scotland, Wales, and, especially, Northern Ireland, are today little more than slave plantations and social engineering laboratories, serving the needs of …the City of London…

These families constitute a financier oligarchy; they are the power behind the Windsor throne. They view themselves as the heirs to the Venetian oligarchy, which infiltrated and subverted England from the period 1509-1715, and established a new, more virulent, Anglo-Dutch-Swiss strain of the oligarchic system of imperial Babylon, Persia, Rome, and Byzantium….

Steinberg belongs to a group of historians associated with economist Lyndon Larouche. They have traced this scourge to the migration of the Venetian mercantile oligarchy to England more than 300 years ago.

Although the Larouche historians do not say so, it appears that many members of this oligarchy were Jews. Cecil Roth writes: “The trade of Venice was overwhelmingly concentrated in the hands of the Jews, the wealthiest of the mercantile class.” (The History of the Jews in Venice, 1930)

As William Guy Carr points out in Pawns in the Game, both Oliver Cromwell and William of Orange were funded by Jewish bankers. The English Revolution (1649) was the first in a series of revolutions designed to give them world hegemony. The establishment of the Bank of England by William in 1694 was the next crucial step. Behind the facade, England has been a “Jewish” state for over 300 years. (pp.20-24)

The Jewish banking families made it a practice to marry their female offspring to spendthrift European aristocrats. In Jewish law, the mixed offspring of a Jewish mother is Jewish. (The male heirs marry Jews although the Victor and Jacob Rothschild are exceptions .) For example, in 1878 Hannah Rothschild married Lord Rosebery. who later became Prime Minister. In 1922 Louis Mountbatten, the uncle of Prince Philip and cousin of the Queen married the granddaughter of Jewish banker Ernest Cassel, one of the wealthiest men in the world. Winston Churchill’s mother, Jenny (Jacobson) Jerome, was Jewish. By the beginning of the 1900s, there were very few English aristocrat families left that hadn’t intermarried with Jews. It was said that, when they visited the Continent, Europeans were surprised to see Jewish looking persons with English titles and accents.

According to L.G. Pine, the Editor of Burke’s Peerage , Jews “have made themselves so closely connected with the British peerage that the two classes are unlikely to suffer loss which is not mutual. So closely linked are the Jews and the lords that a blow against the Jews in this country would not be possible without injuring the aristocracy also.” (Tales of the British Aristocracy1957, p.219.)

If they aren’t Jewish by intermarriage, many European aristocrats consider themselves descendents of Biblical Hebrews. The Hapsburgs are related by marriage to the Merovingians who claim to be descendents of the Tribe of Benjamin.

In addition, many aristocrats belong to the “British Israel” Movement that believes the British soveriegn is the head of the Anglo Saxon “Lost Tribes” of Israel and that the Apocalyse will see the full reconstitution of the British Empire.

According to Barbara Aho, Rosicrucians and Freemasons, who believe in British Israelism, have a plan to place one of their bloodline on the throne of the rebuilt Temple in Jerusalem. This positioning of a false messiah whom the world will worship as Christ has been carefully planned and executed over many centuries.

According to Barry Chamish, “there would be no modern state of Israel without British Freemasonry. In the 1860s, the British-Israelite movement was initiated from within Freemasonry. Its goal was to establish a Jewish-Masonic state in the Turkish province of Palestine…Initially, British Jewish Masonic families like the Rothschilds and Montefiores provided the capital to build the infrastructure for the anticipated wave of immigration. However, luring the Jews to Israel was proving difficult. They, simply, liked European life too much to abandon it. So Europe was to be turned into a nightmare for the Jews.”

I wasted much of my life getting a conventional education, so I feel I am beginning my education anew.

It appears that a vampire-like clique directs the world. This secretive cabal is represented by our dominant political, economic and cultural institutions. Western society has been subverted and western culture is bankrupt. Democracy is a form of social control and the mass media/ education are systems for indoctrination.

Essentially the problem boils down to whether we believe man was made in God’s image and has an obligation to lift himself to a higher level of truth, beauty and justice. Naturally monopolists have no use for this and want to define reality to suit their own interests. They have taught us that God is dead and man is just a fancy animal without a divine soul. Culture today tends to deny standards, ideals and goals of any kind. Instead, we are fed an endless diet of trivia and degradation.

Certain elite Jews are an integral part of this elite neo feudal conspiracy. Throughout history they have had a symbiotic relationship with the aristocracy. But ordinary Jews like the serfs were manipulated and persecuted by their elites.

True Judaism like Islam and Christianity affirms the supremacy of God as a moral force. A real Jew, like a true Christian or Muslim cannot perform an immoral act. It’s time to reaffirm our belief in God.

See also my “The Riddle of Anti Semitism”

See also my “Is the New World Order Jewish?”

HG Wells’ “The world state as extension of British Empire”

A History of Jewish Power in England