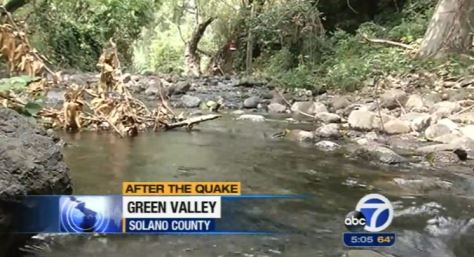 The drought in California carries on, however, the recent 6.0 magnitude earthquake near Napa, CA has caused water to well up in normally dry creeks in the surrounding area near Vallejo , in Solano county .

The flow of water began directly after the earthquake, currently still flowing.

At first, residents thought the water might be from a dam several miles up stream, but now it is confirmed to be an underground source.

“Green Valley Creek outside of Fairfield was dry up until Sunday’s earthquake. Since then water has been flowing and residents are worried. It’s not a huge rush of water, but it’s enough for residents to question where it’s coming from.

“They said there’s water flowing in the creek right after the earthquake, what’s going on? The fears are, what if there are fissures in the dam or one of the pipes is broken,” Bill Mayben, Green Valley Landowners Association president, said.

There are two dams upstream from Green Valley Creek, one at Lake Frey and another at Lake Madigan.

The City of Vallejo manages the water system and on Friday, a state inspector confirmed that none of the city’s dams sustained any earthquake-related damage.

Instead, the water, about 300 gallons per minute, is coming from the ground about a mile downstream from Frey Dam through fissures in the rocks caused by the earthquake.

“Our suspicion is that this phenomena, as these groundwater areas drain down as these pockets of water drain down, that it’ll return to its normal flow pattern,” Franz Nesterlode, Vallejo Water superintendent, said. “That’s our expectation.”

Residents are hoping that the water is indeed coming from the ground, and not because of any structural damage..”