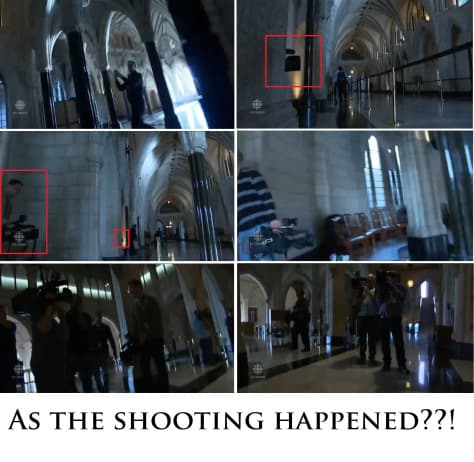 Canada had a shooting at its parliament building?

Watch RAW video of the shooting as it happened live here…

One thing about this “live active shooter” video that stands out to me.  One glaring fact that cannot be overlooked.  One absurdity beyond absurdity that would NEVER happen in a “real” situation like a random spontaneous shooting.

What’s with the cameramen pre-stationed at every angle, hiding from other cameras view, ducking out of the way of the video, not hiding from shooters?

At each pillar, we see HIGH QUALITY media video cameras!

Stationed IN FRONT of the pillars at to try to avoid being in each others shot, not hiding from anyone as they are fully exposed !

Then , as if one nice camera out in the open isn’t enough, another camera man is right behind using a nice wooden chair to rest his camera on — just hanging out in the open , no big deal…

Then, to top it off.. a THIRD cameraman ducks out behind our rolling cameraman !!

Notice each cameraman is different.. one wearing a green shirt, one wearing a striped shirt… so we know its not a shot of the same person twice.

THREE total media cameras in the live shot of the shooting, and the camera rolling, which we’re watching to get this video, makes the 4th!!

Then our cameraman runs down the hall, uncut, to another area.. where we see at LEAST 3-4 more cameras with sound engineers on hand as well.

No one else there, just police standing, and MULTIPLE cameras, and sound engineers with microphone booms.

All these cameramen stationed at multiple spots, literally as the shooting took place.

For sure three cameramen in the hall , plus the guy filming what we see above.

False flag? Total Hoax?  Media staged, or forewarned to be there ready to roll?  Combination of these?

For sure too many cameras on hand, and for sure they’re not hiding from gunmen, but from each others view!