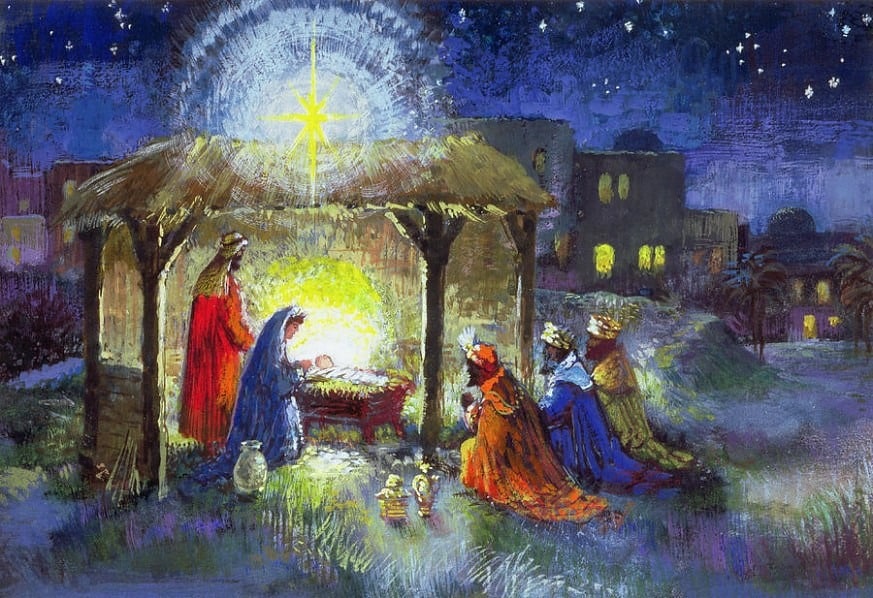 I used to try to “keep Christ in Christmas,” wore “Jesus is the Reason for the Season” and “Kneeling Santa” pins, the whole nine yards. But many of us have learned that Christmas was not originally about the birth of Christ at all. In reality it started out as a pagan celebration as Jim Duke explains in the article below, Jesus was added after the fact by the Roman Catholic church. Today it’s a cultural holiday that brings in big profits for the retailers (especially Amazon.) So, in getting upset about nativities are banned in public places, we’re defending the inclusion of Christ’s birth in a holiday that was never about Him to begin with, *although things like this do serve to show how the tide is turning against Christianity.

This year I did set up a little nativity on the mantle that my mother in law lovingly made years ago and I lit a frankincense candle for ambiance as we ate our Christmas chili. I did send a few gifts to people I love. There is nothing wrong with remembering God’s gift to us or giving gifts to others. The problem as I see it is in teaching our children to expect gifts and breaking our bank accounts to meet those expectations. The problem is confusing our children with a mix of Jesus, materialism, ribbons, bows, phallus trees, tinsel, Santa & reindeer.

But on the other extreme, this year more than ever I’ve seen believers rebuking each other for celebrating Christmas. And I get it. We’re upset. We’ve been lied to about so many things. We love Jesus and we thought this was His holiday. We were wrong. We are disappointed. Boo hoo. But before we become holiday shut-ins and alienate all our family and friends, there are two things that Christmas has going for it that I think we should keep in mind:

So, in that spirit, without the phallus tree, Satan Claus and host of occult symbolism, Merry Christmas Everyone! My heartfelt blessing to you and yours!

And in the spirit of truth, here is some more factual history about the origins of Christmas to tuck under your hat.

A good name [is] better than precious ointment; and the day of death than the day of one’s birth. Ecc 7:1 KJV

Christmas was first named by the Roman Catholic Church. Ironically “Mass” has a meaning more related with “dismissal” or “death” rather than birth. In Catholic doctrine it is celebrated the death and coming back to life of Jesus EACH service. So Christ is put back on the cross crucified and risen each service through the Eucharist performed by the Priest.

The first recorded date of Christmas being celebrated on December 25th was in 336, during the time of the Roman Emperor Constantine (he was the first Christian Roman Emperor). But it was not an official Roman state festival at this time. It adopted as such by the Catholic Church to coincide with other traditions of that time.

The early church recognized the resurrection of Christ, but did not necessarily make an observance for His birth. That came through the Catholic Church, as Romans celebrated birth dates.

The adopted time that the Roman Church recognized the birth of Jesus synchronized with the Winter Solstice and celebration of Saturnalia during which the pagans had practiced.

The Winter Solstice is the day where there is the shortest time between the sun rising and the sun setting. It happens around December 22nd to the 24th. To pagans this meant that the winter was over and spring was coming and they had a festival to celebrate it and worshiped the sun conquering the darkness of winter. December 25th was the sun returning to the longer cycle and the celebration of rebirth of the conquering sun.

The tradition became standard of the Catholic Church of Rome who replaced Mithras with Jesus during the time of observance. The Christian adaptation spread to other cultures as Christians under Rome also recognized the observance. Also brought in was the decor of the pagans, the tree, and holly, and the lights which were given Christian meaning.

This practice was banned by the Puritans in the early founding of America. Eventually Dutch settlers and Europeans brought it back as their culture and it refueled again in the 19th century. Many Christians continue using this observance as a reference to the birth of Christ (even though it was the adopted date corresponding with the Dec 25th pagan gods). To them it is a reminder of the birth of Christ, as Roman practice recognizes birthdays of gods, which is the origin of Christmas.

It has remained tradition and observed by the Catholic Church and Christian community at large. The secular nonreligious world also observe the festival, without recognizing it as the birth date of Christ (which it is not anyway). Both Christian and secular culture observe the holiday all the same, which has become a mix of the recognition of the birth of Christ AND the decor of the pagan celebration with the festivities of the season. It has become a staple in the American culture as a time to get together regardless of view.