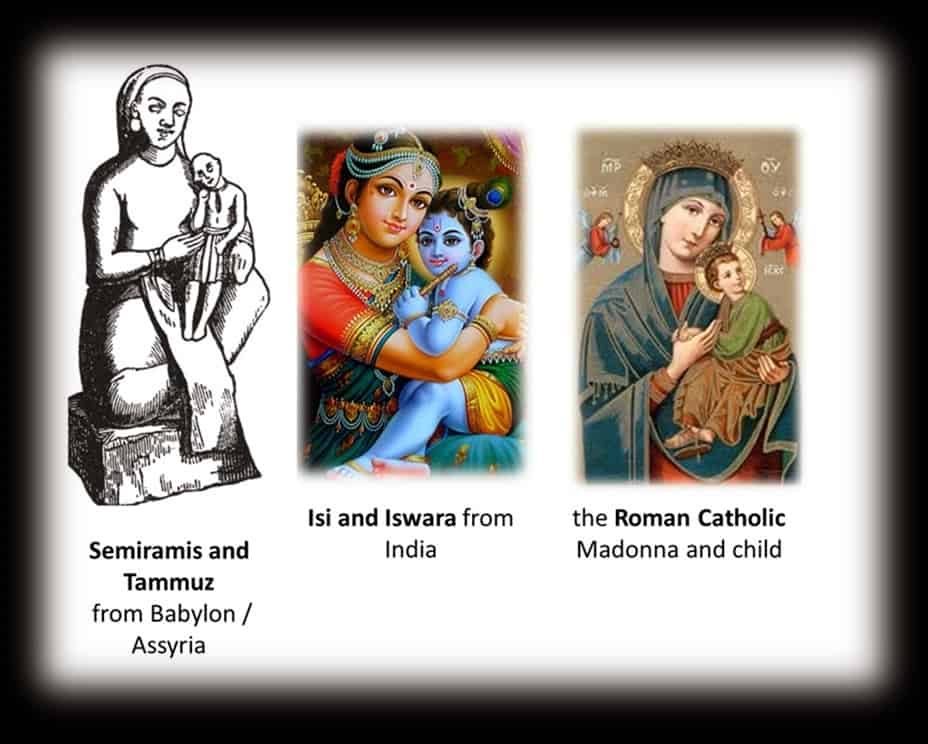 If we got Christmas from the Roman Catholics, and they got it from paganism, where did the pagans get it? Where, when, and what was its real origin?

It is a chief custom of the corrupt system denounced all through Bible prophecies and teachings under the name of Babylon. And it started and originated in the original Babylon of ancient Nimrod! Yes, it stems from roots whose beginning was shortly this side of the Flood!

Nimrod, grandson of Ham, son of Noah, was the real founder of the Babylonish system that has gripped the world ever since—the system of organized competition—of man-ruled governments and empires, based upon the competitive and profit-making economic system. Nimrod built the Tower of Babel, the original Babylon, ancient Nineveh, many other cities. He organized the world’s first kingdom. The name Nimrod, in Hebrew, is derived from “Marad,” meaning “he rebelled.”

From many ancient writings, considerable is learned of this man, who started the great organized worldly apostasy from God that has dominated this world until now. Nimrod was so evil, it is said he married his own mother, whose name was Semiramis. After Nimrod’s untimely death, his so-called mother-wife, Semiramis, propagated the evil doctrine of the survival of Nimrod as a spirit being. She claimed a full-grown evergreen tree sprang overnight from a dead tree stump, which symbolized the springing forth unto new life of the dead Nimrod. On each anniversary of his birth, she claimed, Nimrod would visit the evergreen tree and leave gifts upon it. December 25th was the birthday of Nimrod. This is the real origin of the Christmas tree.

Through her scheming and designing, Semiramis became the Babylonian “Queen of Heaven,” and Nimrod, under various names, became the “divine son of heaven.” Through the generations, in this idolatrous worship, Nimrod became the false Messiah, son of Baal the Sun-god. In this false Babylonish system, the “Mother and Child” (Semiramis and Nimrod reborn), became chief objects of worship. This worship of “Mother and Child” spread over the world. The names varied in different countries and languages. In Egypt, it was Isis and Osiris. In Asia, Cybele and Deoius. In pagan Rome, Fortuna and Jupiterpuer. Even in Greece, China, Japan, Tibet is to be found the counterpart of the Madonna, long before the birth of Christ!

Thus, during the fourth and fifth centuries, when the pagans of the Roman world were “accepting” the new popular “Christianity” by hundreds of thousands, carrying their old pagan customs and beliefs along with them, merely cloaking them with Christian-sounding names, the Madonna and “Mother and Child” idea also became popularized, especially at Christmas time. Every Christmas season you will hear sung and chanted dozens of times the hymn “Silent Night, Holy Night,” with its familiar “Mother and Child” theme. We, who have been born in such a Babylonish world, reared and steeped in these things all our lives, have been taught to revere these things as holy and sacred. We never questioned to see where they came from—whether they came from the Bible or from pagan idolatry!

We are shocked to learn the truth—some, unfortunately, take offense at the plain truth! But God commands His faithful ministers, “Cry aloud, spare not, lift up thy voice like a trumpet, and show my people their transgression” (Isaiah 58:1). Shocking as these facts are, they are the plain facts of history and the Bible!

The real origin of Christmas goes back to the ancient Babylon. It is bound up in the organized apostasy with which Satan has gripped a deceived world these many centuries! In Egypt, it was always believed that the son of Isis (Egyptian name for “Queen of Heaven”) was born December 25th. Paganism celebrated this famous birthday over most of the known world for centuries before the birth of Christ.

December 25th is not the birthday of Jesus the true Christ! The apostles and early true Churchnever celebrated Christ’s birthday at any time. There is no command or instruction to celebrate it in the Bible—rather, the celebrating of birthdays is a pagan, not a Christian custom, believe it or not!

Thus the ancient idolatrous “Chaldean Mysteries,” founded by this wife of Nimrod, have been handed down through the pagan religions under new Christian-sounding names.

The Plain Truth About Christmas