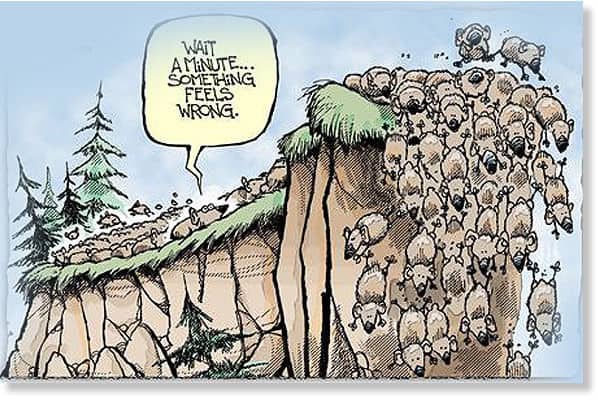 “If you know anything about disinformation, if you know how governments and discredit movements, they always say: “Conspiracy Theories.” It’s the first thing you go to.because people don’t want to be involved in conspiracy theories.” – Glenn Beck

We are dealing with a psychological warfare operation targeting our minds, influencing society, controlling debate and defining reality

Q – Why do people from the truth movement keep getting called “psychotic” and all other names for what they believe?

A –  Because they don’t have any evidence to try to disprove what we say. So, rather than arguing the evidence with us, they have to attack the messenger. They say: “You’re crazy.”

Conspiracy Fact: Elitists Are on Record for 95% of the Population to be Eliminated


Ever heard of a guy named Bill Gates?

Bill Gates is what many call a eugenicist, but he is not alone and is surrounded by lots of famous people and organizations worldwide:

“Since its inception, the U.N. has advanced a world-wide program of population control, scientific human breeding, and Darwinism.”
-Claire Chambers, The SIECUS Circle: A Humanist Revolution.

“The present vast overpopulation, now far beyond the world carrying capacity, cannot be answered by future reductions in the birth rate due to contraception, sterilization and abortion, but must be met in the present by the reduction of numbers presently existing. This must be done by whatever means necessary.”
-Eco-92 Earth Charter

“Childbearing [should be] a punishable crime against society, unless the parents hold a government license … All potential parents [should be] required to use contraceptive chemicals, the government issuing antidotes to citizens chosen for childbearing.”
– David Brower, Executive Director of The Sierra Club

“If radical environmentalists were to invent a disease to bring human populations back to sanity, it would probably be something like AIDS. It has the potential to end industrialism, which is the main force behind the environmental crises.”
– Earth First!

“At present the population of the world is increasing at about 58,000 per diem. War, so far, has had no very great effect on this increase, which continued throughout each of the world wars.. War has hitherto been disappointing in this respect, but perhaps bacteriological war may prove effective.

“If a Black Death could spread throughout the world once in every generation, survivors could procreate freely without making the world too full. The state of affairs might be unpleasant, but what of it?”

-Bertrand Russell, The Impact of Science on Society.

“A total population of 250-300 million people, a 95% decline from present levels, would be ideal.”
-Ted Turner, CNN founder and supporter of UN

“There are many ways to make the death rate increase.”
– Robert McNamara, New Solidarity, March 30, 1981

If you don’t think this administration is in favor of population control then maybe Holdren’s words will convince you.
All quotes in this section are from John P. Holdren, Obama’s science advisor, Ecoscience 1977.

“Indeed, it has been concluded that compulsory population-control laws, even including laws requiring compulsory abortion, could be sustained under the existing Constitution if the population crisis became sufficiently severe to endanger the society.”

“One way to carry out this disapproval might be to insist that all illegitimate babies be put up for adoption—especially those born to minors, who generally are not capable of caring properly for a child alone. If a single mother really wished to keep her baby, she might be obliged to go through adoption proceedings and demonstrate her ability to support and care for it. Adoption proceedings probably should remain more difficult for single people than for married couples, in recognition of the relative difficulty of raising children alone. It would even be possible to require pregnant single women to marry or have abortions, perhaps as an alternative to placement for adoption, depending on the society.”

“Adding a sterilant to drinking water or staple foods is a suggestion that seems to horrify people more than most proposals for involuntary fertility control.”

“A program of sterilizing women after their second or third child, despite the relatively greater difficulty of the operation than vasectomy, might be easier to implement than trying to sterilize men.”

“The development of a long-term sterilizing capsule that could be implanted under the skin and removed when pregnancy is desired opens additional possibilities for coercive fertility control. The capsule could be implanted at puberty and might be removable, with official permission, for a limited number of births.”

“In today’s world, however, the number of children in a family is a matter of profound public concern. The law regulates other highly personal matters. For example, no one may lawfully have more than one spouse at a time. Why should the law not be able to prevent a person from having more than two children?”

“Perhaps those agencies, combined with UNEP and the United Nations population agencies, might eventually be developed into a Planetary Regime—sort of an international superagency for population, resources, and environment. Such a comprehensive Planetary Regime could control the development, administration, conservation, and distribution of all natural resources, renewable or nonrenewable, at least insofar as international implications exist. Thus the Regime could have the power to control pollution not only in the atmosphere and oceans, but also in such freshwater bodies as rivers and lakes that cross international boundaries or that discharge into the oceans. The Regime might also be a logical central agency for regulating all international trade, perhaps including assistance from DCs to LDCs, and including all food on the international market.”

“The Planetary Regime might be given responsibility for determining the optimum population for the world and for each region and for arbitrating various countries’ shares within their regional limits. Control of population size might remain the responsibility of each government, but the Regime would have some power to enforce the agreed limits.”

“To date, there has been no serious attempt in Western countries to use laws to control excessive population growth, although there exists ample authority under which population growth could be regulated.”

A few more from various sources:

“The resultant ideal sustainable population is hence more than 500 million but less than one billion.”
-Club of Rome, Goals for Mankind

“In order to stabilize world population, we must eliminate 350,000 people per day. It is a horrible thing to say, but it is just as bad not to say it.”
– Jacques Cousteau, 1991 explorer and UNESCO courier

“I believe that human overpopulation is the fundamental problem on Earth Today” [and] “We humans have become a disease, the Humanpox.”
– Dave Foreman, Sierra Club, co founder of Earth First!

“We don’t want the word to go out that we want to exterminate the Negro population.”
– Margaret Sanger, Founder of Planned Parenthood

“A total population of 250-300 million people, a 95% decline from present levels, would be ideal”
– Ted Turner, founder of CNN

“And advanced forms of biological warfare that can “target” specific genotypes may transform biological warfare from the realm of terror to a politically useful tool.”
– The Project for a New American Century, Rebuilding America’s Defenses, p. 60, Dick Cheney and Paul Wolfowitz

“Whatever the price of the Chinese Revolution, it has obviously succeeded not only in producing more efficient and dedicated administration, but also in fostering high morale and community of purpose. The social experiment in China under Chairman Mao’s leadership is one of the most important and successful in human history.”
-David Rockefeller Banker, Honorary director of Council on Foreign Relations, honorary chairman of Bilderberg Group & founder of Trilateral Commission. Member of Bohemian Club, praising Chairman Mao, whose policies killed at least 30 million people.

“War and famine would not do. Instead, disease offered the most efficient and fastest way to kill the billions that must soon die if the population crisis is to be solved. AIDS is not an efficient killer because it is too slow. My favorite candidate for eliminating 90 percent of the world’s population is airborne Ebola (Ebola Reston), because it is both highly lethal and it kills in days, instead of years.

“We’ve got airborne diseases with 90 percent mortality in humans. Killing humans. Think about that. “You know, the bird flu’s good, too. For everyone who survives, he will have to bury nine.” –
– Dr. Eric Pianka

If you throw these people and organizations into the mix, you might understand that there really are those who are evil enough to try to exterminate a large part of the world population.