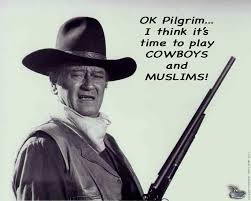 Conservatives seem determined to prove they’re rubes.
We all know that the Masonic Jewish bankers are responsible for terror.
So why do conservatives blame Muslims?

This was sent to me by a conservative whose links usually are of a high quality.

A Texas cowboy, a Native American and a Muslim are waiting for their plane in a small Texas airport. The Texas cowboy
leans back in his chair, crosses his boots on a magazine table and tips his big sweat-stained hat forward over his face.

The wind outside is blowing tumbleweeds around and the old
windsock is flapping, but still no plane comes.

The American Indian clears his throat and softly speaks.
“At one time here, my people were many, but sadly, now we are few.”

The Muslim student raises an eyebrow and leans forward,
“Once my people were few,” he sneers, “and now we are many.
Why do you suppose that is?”

The Texas cowboy shifts his toothpick to one side of his
mouth and from the darkness beneath his Stetson says in a drawl:

That’s cause we ain’t played Cowboys & Muslims yet,  but I do believe it’s a-comin”.
—

Can you imagine the outcry if this story was entitled “Cowboys and Jews?”  But somehow it is acceptable to threaten Muslims with genocide.

A wave of anti-Muslim sentiment is sweeping the West. If the false flag terror continues, this will grow to a fever pitch. Already, women wearing hijabs are being called “terrorists.”   What mental infirmity persecutes the innocent for the crimes of people they resemble?

The Masonic Jewish central banking cartel is responsible for this terror. Their agenda is to distract us from them, our real enemy.
Ever since 9-11, they have been trying to get Muslims and  Christians to kill each other. It’s their MO. It’s why they start wars. To kill the goyim.

Are the goyim as stupid as the bankers think?

They sponsor terror as a pretext to create a police state. Yet people who should know better spew anti-Muslim venom. For example, I respect Dr. Eowyn at Fellowship of the Minds and Ron at Saboteur 365.  I often tweet their articles. I agree that whites should not become a minority in their own countries. But I don’t understand their constant anti Muslim sentiment.

I don’t understand how they conflate the actions of Western mercenaries like ISIS with hatred of millions of ordinary Muslims who have nothing to do with this. It is very similar to conflating the Rothschilds with all Jews, most of whom are not aware of the agenda.

Let’s be honest. Everyone is complicit to some degree. Everyone is manipulated by the Illuminati mass media or employed by them indirectly. Virtually the whole establishment is a willing accomplice to the most heinous crimes. However our enmity should be reserved for those actually responsible for terror: the Illuminati central wankers and the traitorous politicians and media of the colonized West.

The Rothschild-controlled West is responsible for destroying the lives of millions of Muslims in Afghanistan, Iraq, Libya, Palestine and Syria. We are all complicit as citizens. Yet readers like Darrel have the audacity to write to me: “Muslims have NEVER brought anything good to humanity’s table, only rape, death, torture, enslavement and more death…. When it is finally understood that Islam IS NOT a religion, but a political scheme to overtake the whole world (it has been since it’s beginning and long before the Rothschilds) then things begin to become more clear.”

The men who shot up a Cambodian restaurant on November 13 were white and looked like French intelligence operatives in every way. They drove a shiny new Mercedes and one handled a machine gun like a pro.  According to the Daily Mirror, the shooter and driver “looked like soldiers or mercenaries and carried the whole thing out like a military operation. It was clear that they were both very heavily armed and the gunman was carrying several magazines on him.” 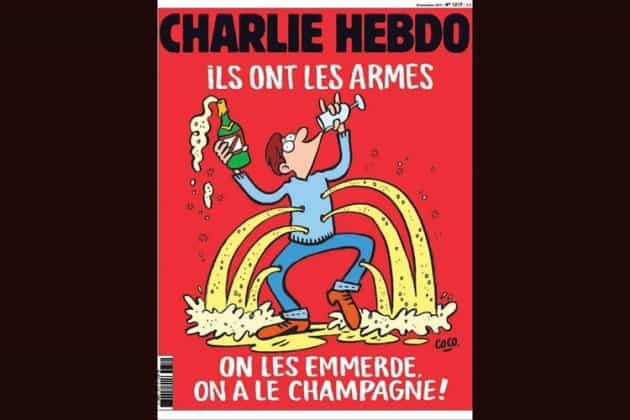 Left the latest Charlie Hebdo cartoon (‘They have weapons. We have champagne.’ ) and turn it upside down 180 degree. I see a Menorah. Hebdo owned by Rothschilds. Also, notice the devil sign while tipping the glass, the six fingers exposed, six bullets holes, and six champagne streams flowing out-666.  The Religion of Lucifer/Satan-Bang!  For those who have eyes to see-in your face! — Readers

The man is connected to Baron Edmond de Rothshild and he’s one of the first Israeli IDF military sponsors, while another Rothschild, Daniel, is one of the IDF heads. Mossad is a IDF division while the largest Lagardere Group stockholders is the Emir of Qatar (the first ISIS sponsor).

So we have a clean connection between a Rothshild agent, Arnauld Lagardere, the terrorist attacks in Paris and ISIS, a CIA/Mossad false flag operation financed by the Gulf regimes money.

Here you are, like Charlie Hebdo, the Economist is 100% zionist propaganda. It looks like Rothschild sponsored terrorism to me, the date of the attacks was also in the occult Economist 2015 cover (owned by Rothschilds), between the two arrows.

One last thing that you might find interesting. The Bataclan massacre was clearly an occult ritual, staged and carried out by selected special units, no Muslim patsies here.

The Laloux brothers sold the Bataclan club on 9/11, a very symbolic date, then one of the two moved to Israel. In the only picture of the Bataclan massacre released as well: what do you see in the center of the arena? I see a perfectly written-in-blood Ra eye.

The illuminati Ra cult is an occult ring of mind controlled slaves trained by the Rothschild programmers, a “private militia” of chipped (literally) and mentally abused slaves. They are trained like Mi6 operatives for black Ops and to blindly serve their masters, just like the Mi6 agents are trained to serve the Royal family.

An horrid blood sacrifice, on Friday 13, to gather a big spiritual power for what?  We don’t know, but this is pure madness that comes from the devil.”

It’s clear who the hidden hand belongs to. Let’s stop conflating all Jews with the Rothschilds, all Muslims with the Rothschild’s false flag mercenaries.  Let’s focus on our mortal enemy rather than be distracted by his stratagems. Even better, Christians, Jews and Muslims  should unite as brothers to confront this mortal threat to civilization.
—-

First Comment by Tim: ILLUMINATI BANKERS PLANNED TERROR MORE THAN A YEAR AGO 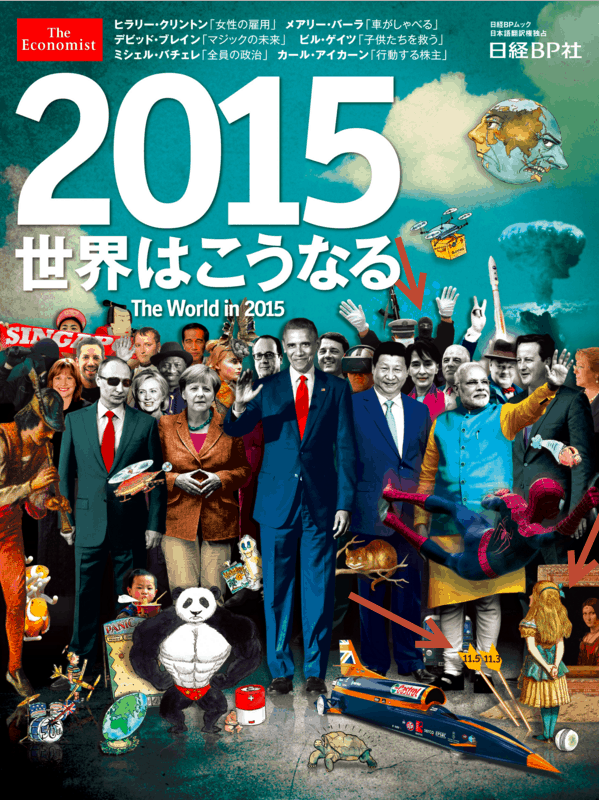 First arrow from the top points to a masked gunman holding AK-47.

Third arrow points to two markers near a sand pile with numbers.

Same as the black-clad, AK-47-wielding terrorists that just attacked Paris.

Before looking at the second arrow, consider the numbers pointed to by the third arrow.

These numbers rearranged to make a calendar date becomes: 13-11-15.

The Paris attacks were committed Friday the 13th, November 2015.

The second arrow shows the painting that is located in Paris.

Moreover, there is cafe named after the painting located on rue Charonne.

One location of the Paris attacks was on rue Charrone.

A ferronierre is a headband with a jewel in the centre of the forehead (third eye, or illuminated).

Ferronierres were made by metalworkers (including iron, or fer in French).

Cain and Tubal-cain were metalworkers.

Lastly, the Qatari Holdings fund (Qatar is major sponsor of ISIS) as the chief investor in Lagardere Group bought the theatre Bataclan.

It was purchased from two Israeli men who had owned it for decades.

The magazine ‘predicted’ the what, where, and when for the Paris attacks.

The media sells the who and why as subterfuge to manifest a strategy of tension.