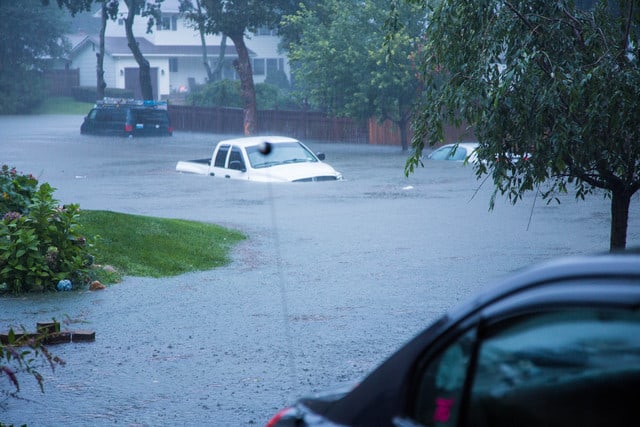 How can over 13 inches of rain fall in one spot in just hours? Wake up people, the weather is manipulated by governments for global control and financial gain. If you doubt it, just look at the list of geoengineering patents and documents on this site.

NEW YORK (CBSNewYork) — A virtually unheard of anomaly in the atmosphere was to blame for a devastating rainstorm on Long Island Wednesday, which set a new one-day record for rainfall in New York State.

As CBS 2’s Lonnie Quinn explained, the chain of events began late Tuesday when upper-level energy headed northward from Baltimore as had been expected. The storm system drenched Baltimore with about 5 1/2 inches of rain on Tuesday.

But the system did not only move northward as expected, Quinn explained. It collided with another system coming from the Atlantic Ocean, which added an enormous amount of moisture.

The storm system went on growing in strength as it worked its way north.

Storm systems typically do not pick up such copious amounts of moisture from the ocean at this time of year. The ocean is cooler in the land in the summer, hence why people go to the ocean to escape the summertime heat. But nevertheless, this time, the ocean energized the storm.

But it got even worse.

The storm hit Long Island as a big ball of moisture, but it did not move over the island as a concentrated ball that would come and go quickly, Quinn explained. Instead, the system elongated into a long, skinny line and stalled over portions of Suffolk County.

The total also set a new record for a single-day rainfall anywhere in New York State. The previous record was 11.60 inches, set in upstate Tannersville during Hurricane Irene in 2011.

It would be the equivalent of 11 feet of snow falling in one 24-hour period, Quinn reported.

From Tuesday evening until Wednesday morning, Islip got more than 13 inches of rain, more than the normal total for June, July and August of 11.75 inches, said Joe Pollina of the National Weather Service.

But between 5 and 6 a.m. alone – in a space only 7 miles wide – more than 5 inches of rain fell to bring the total to 7.25 inches. Such rainfall in so little time is virtually unheard of outside of a tropical storm, Quinn reported.

A state of emergency was declared with Suffolk County, where county Executive Steve Bellone called the weather Wednesday morning a “storm of historic proportions.”

“It was unprecedented and unpredicted — the size, the extent, the scale,” Bellone said at a news conference Wednesday, also remarking that “this could be a 500-year storm we just witnessed.”

Gov. Andrew Cuomo said resources have been deployed to Long Island to help with the flooding and said the state’s Emergency Oper