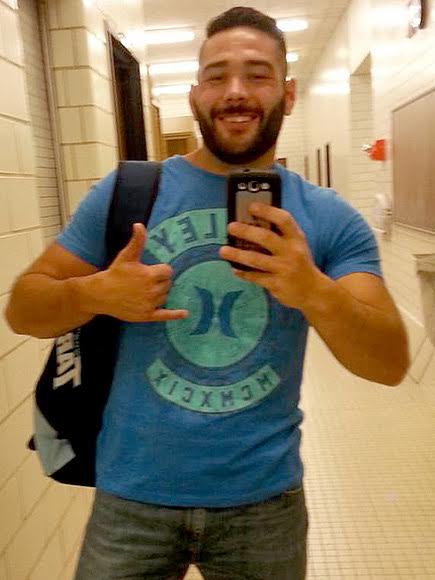 Another exhibit for the case that the mass shootings are a psy op.

Here’s the “hero” of the Oregon campus shooting, Chris Mintz.  Mintz is billed as a war vet who was shot five times while rushing the shooter.    There’s talk that Obama will give this guy a ‘Medal of Freedom’.

Below Chris and friends make the Sign of Baphomet. Do you see five bullet wounds?

These are hoaxes.  Sometimes there are real deaths, sometimes not.

The purpose of faking it has nothing to do with sparing lives.    This genre of mass murder spectacle is myth building.

What kind of person flashes the ‘Baphomet’ hand sign with their tongue hanging out Miley Cyrus fashion at a hospital?  Why are the families of children, sisters, brothers, daughters and sons who’ve just been shot to death so giddy?  To a normal person, or perhaps I should say anyone that’s not under the spell of  television induced trance, the behavior we witness in these presentations is out of synch to the point of being surreal.

It’s not that this is the first time we’ve seen a protagonist in a shooting in photos with odd friends flashing the ‘Hail Satan’ sign and mocking the camera in the midst of alleged mass murder.   It happens every time.

Here’s (below left) the 14 year old girl from Aug 2014 Houston – at a press conference the day after her parents and brothers and sisters were allegedly shot in the head execution style by her aunt’s estranged husband.  This girl – Cassidy Stay – was supposedly SHOT IN THE BACK OF THE HEAD, PLAYED ‘DEAD’, and lived to giggle and exclaim “I LOVE HARRY POTTER” while flashing HAIL SATAN over and over again.  She was even flashing it later from the funeral home limo on her way to plant her family in the cemetery.

Maybe the half million dollars she raised on ‘Go Fund Me’ eased her grief. See Cassidy Stay Gun Control Scam 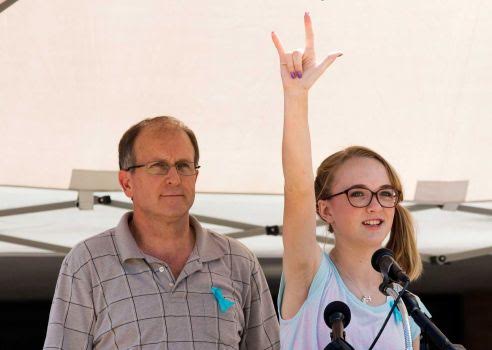 A Youtuber going by the name of Professor Doom has found something quite interesting: After much haranguing of Chris Mintz by skeptics of the official Oregon shooting story, he released a photo of his alleged abdomen gunshot wound. Turns out it is not a gunshot wound at all, but his belly button after umbilical hernia surgery. Watch Doom’s video beginning at the 5 minute 36 second mark and decide for yourself. Gunshot wound or belly button hernia surgery? I go with the latter –