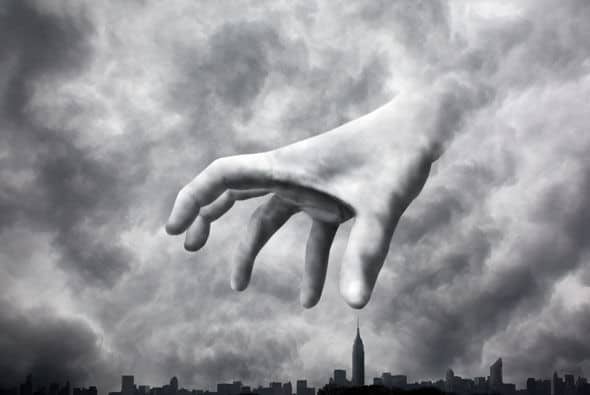 Philip Stalling (abridged)
I am sick and tired of “Christians,” of all people, declaring to me that it is satan that rules here and it is satan which controls and governs the entire earth. These are the same ones who wish to put their head in the sand and wait to be pulled out of the earth rather than to go forward under the authority of Christ and make disciples of all nations.
Where is satan except under the foot of God?
Where are Christians except in possession of power and authority from their King who has commanded them to make disciples of nations rather than avoid them?
Where is the Kingdom of God except in all of God’s elect who now go forward as ambassadors of the King of Kings and fret not of the evil one who cannot touch us? (1 John 5:18)
Many will wish to speak of how matters are horrible here on the earth.
Matters will continue to get worse when Christians believe satan rules here and fail to disciple nations and would rather stick their head in the sand and wait for a flight out of here!

The verse which is typically used in support of this and is twisted so far away from its meaning is found in 2 Corinthians 4:4:

“In whom the god of this world hath blinded the minds of them which believe not, lest the light of the glorious gospel of Christ, who is the image of God, should shine unto them.”

Furthermore, satan has no independent power and authority from God, the Almighty! Have we forgotten that it was satan that reported, along with the other angels, to receive his orders from the Almighty?

“Now there was a day when the sons of God came to present themselves before the LORD, and Satan came also among them.” – Job 1:6

Let us now look to the passages which declare all authority and power rests with one, Jesus Christ. These are not shared powers of sovereignty and rule. There is only one sovereign and it is Jesus Christ.

“And Jesus came and said to them, “All authority in heaven and on earth has been given to me. Go therefore and make disciples of all nations, baptizing them in the name of the Father and of the Son and of the Holy Spirit, teaching them to observe all that I have commanded you. And behold, I am with you always, to the end of the age.” – Matthew 28:18-20

Who can now declare that authority and power belongs to both Jesus and satan? Was Christ confused when He declared this! Certainly not. If there is any one that is confused it is you, oh man, not the King of Kings! There are some Christians which sound like Elijah and wish to invoke the nature of God’s rule to the sheer lack of numerical support.

“He said, “I have been very jealous for the LORD, the God of hosts. For the people of Israel have forsaken your covenant, thrown down your altars, and killed your prophets with the sword, and I, even I only, am left, and they seek my life, to take it away.”

Please note the response of God to such a claim:

“And what was God’s answer to him? ‘I have reserved for myself seven thousand who have not bowed the knee to Baal.'” – Romans 11:4

Another verse that others would invoke in support of satan ruling here comes from 1 John 5:19

“We know that we are from God, and the whole world lies in the power of the evil one.”

John Gill says of this passage:

“And the whole world lies in wickedness; that is, the men of the world, the greater part of the inhabitants of it, who are as they were when they came into it, not being born of God; these are addicted to sin and, wickedness; the bias of their minds is to it, they are set upon it, and give themselves up to it, are immersed in it, and are under the power of it: or “in the wicked one”; Satan, the god of this world; they are under his influence, and led according to his will, and they are governed by him, and are at his beck and command; and this is known, by sad experience, it is easy of observation;

‘And cannot comprehend the things that are promised to the righteous in time to come: for this world is full of unrighteousness and infirmities.’ (2 Esdras 4:27)” – Gill’s Exposition of the Entire Bible (1 John 5:19)

And what is this teaching except that satan merely works in “the children of disobedience.” (Eph. 2:2). And that this working is in not such a degree as to be greater power or authority than God’s! For John has previously said that “greater is He that is within you than he that is in the world” (1 John 4:4) so that there would be no confusion as to the sovereign rule and authority is to be found in none other than the person and work of Jesus Christ!

When we peel back the layers of this false teaching of satan ruling the earth here we find that that is precisely what Freemasons and the Illuminati teach and believe. 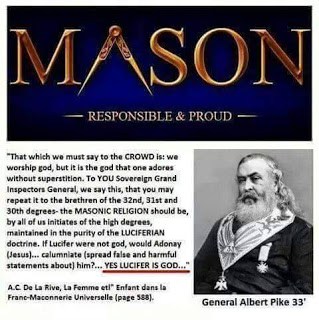 Albert Pike, one of the most influential Freemasons ever to live had this to say about lucifer:

“Lucifer, the Light-Bearer! Strange and mysterious name to give to the Spirit of Darkness! Lucifer, the Son of the Morning! Is it he who bears the light, and with its splendors intolerable blinds feeble, sensual or selfish Souls? Doubt it not!” – Albert Pike, Morals and Dogma of the Ancient and Accepted Scottish Rite of Freemasonry Prepared for the Supreme Council of the Thirty-Third Degree, for the Southern Jurisdiction of the United States, and Published by Its Authority (Richmond, Virginia: L.H. Jenkins, 1871, Reprinted 1944): 321.

“That which we must say to a crowd is—We worship a God, but it is the God that one adores without superstition. To you, Sovereign Grand Inspectors General, we say this, that you may repeat it to the Brethren of the 32nd, 31st, and 30th degrees—The Masonic Religion should be, by all of us initates of the high degrees, maintained in the purity of the Luciferian Doctrine. If Lucifer were not God, would Adonay whose deeds prove his cruelty, perdify and hatred of man, barbarism and repulsion for science, would Adonay and his priests, calumniate him? Yes, Lucifer is God, and unfortunately Adonay is also god. For the eternal law is that there is no light without shade, no beauty without ugliness, no white without black, for the absolute can only exist as two gods: darkness being necessary to the statue, and the brake to the locomotive. Thus, the doctrine of Satanism is a heresy; and the true and pure philosophical religion is the belief in Lucifer, the equal of Adonay; but Lucifer, God of Light and God of Good, is struggling for humanity against Adonay, the God of Darkness and Evil.” – Albert Pike, “Instructions to the 23 Supreme Councils of the World” (July 14, 1889), as recorded by Abel Clarin de La Rive, La Femme et l’Enfant dans la Franc-maçonnerie Universelle (1894): 588.

It is the Illuminati that teach satan rules here, not Christians! And certainly not Scripture! What have you done oh “Christian” by asserting that Lucifer now rules, except align yourselves with those that worship him as such? Why not now submit to he who, you declare, rules over you!? How satanically absurd you have become! Have you not now fallen prey to the beguiling “father of lies” by affirming his rule over and above the Almighty’s!  There is only one Almighty and the Scripture never gives any doubt to who that is.

As satan is worshiped as a “god” he is only worshiped as a false god and is only referenced in this way to expose his followers as rending falsely their allegiance to a ruler that rules only in their minds but in no way rules, as a fact, any where above the King of Kings and Lord of Lords. As when Paul says that “their god is their belly” (Philippians 3:19) he no more means that men’s stomachs rule above the Sovereign Lord but rather demonstrates that which is falsely worshiped and has become their “god” through their wickedness and selfishness which esteems themselves to that height which is met with the thundering expulsion which shot down satan like lightening. (Luke 10:18)

These are the same Christians who wish to depict Jesus and satan in an arm wrestling match and thereby align themselves towards blasphemy which Jesus dispelled against those that challenged His power to cast out demons via Beelzebub rather than the finger of God. (Matthew 12:27)

An important historical fact regarding this issue is to remind folks of the early Christian martyrs that were killed precisely of their affirmation of “Iesous Kyrios” (Jesus is Lord) instead of “Kaiser kyrios” (Ceasar is Lord). Ligonier published an article that speaks of this succinctly saying:

“Early Christians like Polycarp were martyred because they refused to confess Caesar as lord. They knew that Jesus alone is divine and would have no one usurp His status. These Christians knew the New Testament is not merely being polite when it calls Jesus “Lord”; rather, it is teaching that Jesus is God Almighty. Idols of sex, money, power, prestige, and so on can become lords if we are not careful; therefore, let us always confess that Jesus Christ alone is Lord.”

The Scriptures declare clearly who the Lord of all creation is:

“Know therefore today, and take it to your heart, that the LORD, He is God in heaven above and on the earth below; there is no other.” – Deuteronomy 4:39

“Those who contend with the LORD will be shattered; Against them He will thunder in the heavens, The LORD will judge the ends of the earth; And He will give strength to His king, And will exalt the horn of His anointed.” – 1 Samuel 2:10

“Let the heavens be glad, and let the earth rejoice; And let them say among the nations, ‘The LORD reigns.'” – 1 Chronicles 16:31

“The LORD sat as King at the flood; Yes, the LORD sits as King forever.” – Psalms

“Your throne, O God, is forever and ever; A scepter of uprightness is the scepter of Your kingdom.” – Psalms 45:6

“Even from eternity I am He, And there is none who can deliver out of My hand; I act and who can reverse it?” – Isaiah 43:13

“Declaring the end from the beginning, And from ancient times things which have not been done, Saying, ‘My purpose will be established, And I will accomplish all My good pleasure.’ – Isaiah 46:10

“All the inhabitants of the earth are accounted as nothing, But He does according to His will in the host of heaven And among the inhabitants of earth; And no one can ward off His hand Or say to Him, ‘What have You done?'” – Daniel 4:35

“You will say to me then, ‘Why does He still find fault? For who resists His will?’ On the contrary, who are you, O man, who answers back to God? The thing molded will not say to the molder, ‘Why did you make me like this,’ will it? Or does not the potter have a right over the clay, to make from the same lump one vessel for honorable use and another for common use?” – Romans 9:19-21

“Also we have obtained an inheritance, having been predestined according to His purpose who works all things after the counsel of His will.” – Ephesians 1:11

“Now to the King eternal, immortal, invisible, the only God, be honor and glory forever and ever. Amen.” – 1 Timothy 1:17

“which He will bring about at the proper time–He who is the blessed and only Sovereign, the King of kings and Lord of lords.” 1 Timothy 6:15