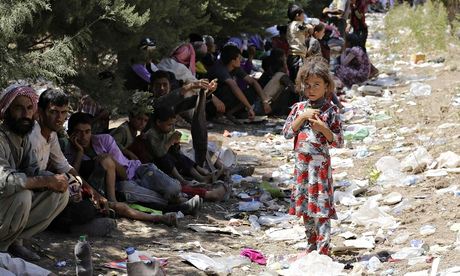 Military mission ruled out for now as special forces find condition of thousands of stranded Iraqis is better than expected.

The US and Britain are stepping back from launching a risky militarymission to rescue thousands of Iraqis stranded on Mount Sinjar after claiming that special forces on the ground found their condition was better than expected.

Declaring that the US bombing has succeeded in beating back forces from the Islamic State (Isis), the Pentagon said the planned rescue mission had been ruled out for the moment.

A small complement of special forces and US aid workers landed on Mount Sinjar to assess the situation of the Iraqi Yazidis – who for days have received air drops of food, water and medicine.

The decision to call off the rescue mission came as the White House declared the mission to target Isis positions in the area with four air strikes since Saturday a success. “The president’s decisive decisions in the immediate wake of the crisis kept people alive and broke the siege of the mountain,” a White House official said.

David Cameron said on Wednesday that Britain had planned to join the rescue mission to relieve the “desperate humanitarian” situation on the mountain. RAF Chinook helicopters were deployed to the region to help with the operation.

But Justine Greening, Britain’s international development secretary, endorsed the view in Washington that the condition of the refugees was better than expected.

Greening told the Today programme on BBC Radio 4: “It has been difficult to get the exact facts of what is happening on the ground, not least because we have seen people coming on to the mountain whilst at the same time others are able to leave the mountain.

“The US have reported overnight from their surveillance efforts that they think there are now fewer people left on the mountain and that those who are there are perhaps in a better state than we might have feared which is good news. But clearly we need to continue doing the air drops we have been doing – the UK, along with the US. We have now seven, getting vital supplies like water in our case. The US has very much majored on getting food to them.”

But Greening said many people left on the mountain were in “desperate straits”. She said: “When you see the ones that have come off the mountain – 10,000 have gone to a camp just over the border in Syria that the International Rescue Committee are building up – they have walked for 14 miles in searing temperatures of possibly up to 50C. So they are very dehydrated, very malnourished. They need a huge amount of medical attention, so we will continue to work to help the people on the mountain.”

British sources said the US air strikes had been successful in beating back Isis forces. One source said: “Barack Obama is going to do very well out of that. You are going to see advances. Stuff is really beginning to arrive.”

In its statement the Pentagon said the team on Mount Sinjar had found a situation less dire than the administration and international organisations had initially thought when the US sent its warplanes back to Iraq for the first time since 2011.

“There are far fewer Yazidis on Mount Sinjar than previously feared,” Kirby said, crediting “the success of the humanitarian air drops, air strikes on [Isis] targets, the efforts of the Peshmerga [Kurdish guerillas] and the ability of thousands of Yazidis to evacuate from the mountain each night over the last several days”.

A Downing Street spokesman said of the call with Hollande: “On Iraq, both leaders agreed on the need to help the Kurdistan regional government tackle the threat posed by Isil [Isis], and to scale up the level of humanitarian support. They agreed that the EU could do more to provide aid and that this should be addressed at this Friday’s foreign affairs council.”

On Sunday thousands of Yazidis, aided by a Syrian Kurdish group, weresaid to have crossed into Iraqi Kurdistan, apparently by descending from the north slope of Mount Sinjar and travelling by land through Syria.

US Central Command, responsible for US military operations in the Middle East and south Asia, would not provide any additional detail on Wednesday concerning the special forces’ assessment. It remains unclear how many Yazidis are still on the mountain, and international estimates vary. Some reports had earlier suggested that up to 30,000 people were still there.

Kirby’s statement left unanswered who decided against the evacuation, attributing the decision to “the interagency”, a bureaucratic term for the various US government security agencies, rather than Obama, the defence secretary Chuck Hagel or the army’s General Lloyd Austin, the Central Command chief. Nor did he definitively rule out an evacuation at a later point.

Despite the declarations of the US administration, the United Nations on Wednesday said it considered Iraq in general to be at the highest level of humanitarian crisis. The special representative Nickolay Mladenov said a level-three emergency was in effect triggering additional aid for Iraq.

Since Saturday the US has launched four rounds of air strikes on Isis positions, checkpoints, vehicles and artillery in the vicinity of the mountain and the town of Sinjar at its foot. The most recent was a drone strike occurring at midday on Wednesday eastern time. All the strikes have come to the south, south-east and south-west of Mount Sinjar, with the northern slope – apparently where the Yazidis’ descent has occurred – left unharassed.

The logistical complexity of removing the Yazidis by air appears to be significant. While C-130 cargo planes can land on rugged terrain, the number of civilians atop the mountain would necessitate numerous runs. On Monday a senior US army officer, Lieutenant General William Mayville of the Joint Staff, said the military had yet to finish devising a plan for an evacuation.