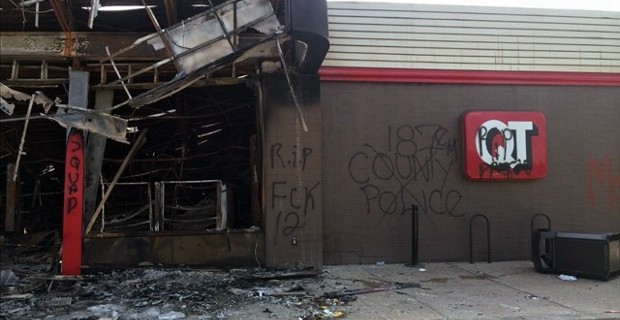 Let’s be honest – Ferguson, Missouri is under military occupation right now, and the entire world is watching in horror as militarized police fire tear gas and rubber bullets at unarmed protesters.  Yes, the rioting and looting in Ferguson needed to be stopped.  If order had not been restored, more stores and businesses would have been destroyed.  However, there is no excuse for the brutal tactics now being employed.  At one point, police snipers were even using laser scopes to target protesters that were obviously unarmed.  Sadly, this is just a preview of what is coming to America in the years ahead.  As the economy falls apart and people become even more angry and even more frustrated, there will be a lot more incidents of civil unrest like we have just witnessed in Ferguson.  And in response, the federal government and our overly militarized police will seek to crush those uprisings with overwhelming force.  How is it possible that our once very peaceful nation has fallen apart so dramatically?

What we just watched happen in Ferguson was truly bizarre.  If you didn’t know any better, you might have thought that you were looking at images from a really bad post-apocalyptic disaster movie.

The following is how the New Yorker described the scene…

Last night, as the images and stories from Ferguson, Missouri, joined the news churn, many who registered their thoughts via social media noted that what they were seeing—policemen with dogs and AR-15 assault rifles standing in a Stygian, blue-lit cloud of tear gas; crowds of protesters with their hands in the air, screaming “Hands up, don’t shoot”; members of the press being removed from the scene—did not look like America.

And I will certainly agree with that.

It did not look like America.  At least not the America that I grew up in.

In a WND article, one woman was quoted as saying that it looked “like something right off the streets of Iraq”…

Cheryl Chumley has been watching developments in Missouri, where Michael Brown was shot over the weekend, and just overnight two more people were shot, including one by police.

“Armored vehicles on patrol, Kevlar-wearing, camouflage dressed officials carting high-powered rifles, tear gas wafting through the air – sounds like something right off the streets of Iraq. But it’s not. It’s actually the scene that’s playing out in Ferguson right now, with SWAT-type police taking to the residential streets for crowd control duties,” she said.

Was all of this really necessary?

The rioting and the looting had already ended.  Was there really a need to fire tear gas at unarmed people?

In the YouTube video posted below, you can see footage of some of the craziness that took place… 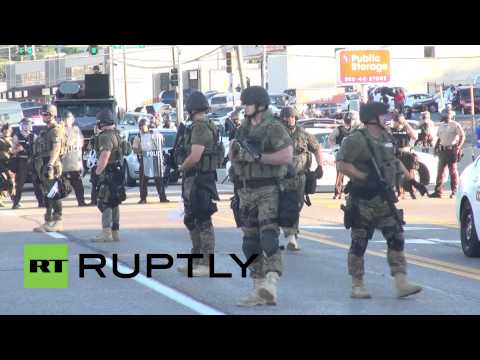 And in this next YouTube video, there is footage of one protester holding his head after being hit directly in the face with a rubber bullet by the police…

In this day and age, images like this spread like wildfire.  Thanks to social media, people all over the country and all over the planet will get a first-hand look at how brutal our militarized police have become.

And the more attention this gets, the more likely that it is that violence will spread to more cities.  Already, a major protest is being planned for Sunday directly in front of police headquarters in Los Angeles.  A man was shot and killed on Monday by the LAPD and people are upset about it.  They have seen what has been happening in Ferguson and now they want to take action.

But wherever civil unrest does erupt, our militarized police will certainly be there to quickly stamp it out.  As a recent Slate article detailed, the militarization of our police has reached unprecedented heights in recent years…

Since 2006, according to an analysis by the New York Times, police departments have acquired 435 armored vehicles, 533 planes, 93,763 machine guns, and 432 mine-resistant armored trucks. Overall, since Congress established its program to transfer military hardware, local and state police departments have received $4.3 billion worth of equipment. Accordingly, the value of military equipment used by these police agencies has increased from $1 million in 1990 to $324 million in 1995 (shortly after the program was established), to nearly $450 million in 2013.

And when police get all of this equipment, it is inevitable that they are going to use it.  One result of this has been the astounding increase in the number of SWAT team raids in America.  The following numbers come from my previous article entitled “10 Facts About The SWATification Of America That Everyone Should Know“…

#2 79 percent of the time, SWAT teams are deployed to private homes.

#3 50 percent of the victims of SWAT raids are either black or Latino.

#4 In 65 percent of SWAT deployments, “a battering ram, boot, or some sort of explosive device” is used to gain forced entry to a home.

#5 62 percent of all SWAT raids involve a search for drugs.

#6 In at least 36 percent of all SWAT raids, “no contraband of any kind” is found by the police.

#7 In cases where it is suspected that there is a weapon in the home, police only find a weapon 35 percent of the time.

#8 More than 100 American families have their homes raided by SWAT teams every single day.

#9 Only 7 percent of all SWAT deployments are for “hostage, barricade or active-shooter scenarios”.

And of course African-American communities receive a greatly disproportionate amount of attention from our militarized police.  Just imagine how you would feel if every time you saw a police officer you cringed in fear because you might be about to get searched again.  The following is how author Michelle Alexander put it in her book “The New Jim Crow“…

Ultimately, these stop-and-frisk operations amount to much more than humiliating, demeaning rituals for young men of color, who must raise their arms and spread their legs, always careful not to make a sudden move or gesture that could provide an excuse for brutal — even lethal — force.

Like the days when black men were expected to step off the sidewalk and cast their eyes downward when a white woman passed, young black men know the drill when they see the police crossing the street toward them; it is a ritual of dominance and submission played out hundreds of thousands of times each year.

So what can we do about this?

How can we change the system?

How can we reverse this alarming militarization of our police?

Unfortunately, our system has become so corrupt that there is very little that we can do.  In fact, one newly released study discovered that average Americans have a “near-zero” statistical impact on public policy…

A startling new political science study concludes that corporate interests and mega wealthy individuals control U.S. policy to such a degree that “the preferences of the average American appear to have only a minuscule, near-zero, statistically non-significant impact upon public policy.”

The startling study, titled “Testing Theories of American Politics: Elites, Interest Groups, and Average Citizens,” is slated to appear in an upcoming issue of Perspectives on Politics and was authored by Princeton University Professor Martin Gilens and Northwestern University Professor Benjamin Page. An early draft can be found here.

Noted American University Historian Allan J. Lichtman, who highlighted the piece in a Tuesday article published in The Hill, calls Gilens and Page’s research “shattering” and says their scholarship “should be a loud wake-up call to the vast majority of Americans who are bypassed by their government.”