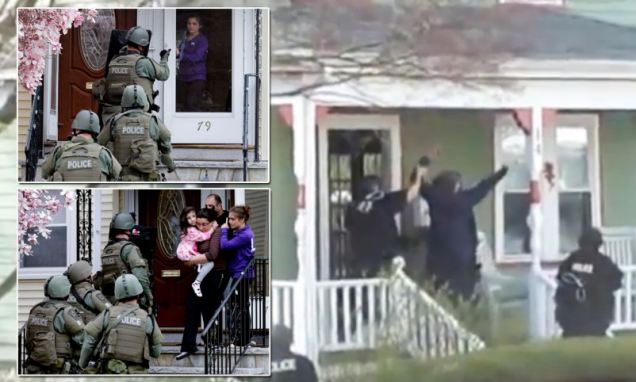 The right of the people to be secure in their persons, houses, papers, and effects, against unreasonable searches and seizures, shall not be violated, and no Warrants shall issue, but upon probable cause, supported by Oath or affirmation, and particularly describing the place to be searched, and the persons or things to be seized.  [Fourth Amendment – U.S. Constitution]

Do Christians and Conservatives Really Desire a Police State?

A Nazi-like, Stalin-like, Mao-like Police State is being constructed in earnest in America. It started with the Patriot Act in 2001. And it has only gotten worse every year since. And, in reality, this burgeoning Police State has no serious opposition–with the exception of 75 million + gun owners.

Democrats and Republicans alike are actively facilitating the American Police State. About the only time one party or the other opposes Police-State-type legislation is when their party is in the minority; and this is only done in an attempt to make the other party look bad. But as soon as the minority party becomes the majority party, it immediately supports the same Police-State-type legislation that it had previously opposed. A classic example is the Patriot Act itself.

I remember standing with former congressman and former Libertarian Party presidential nominee Bob Barr against the Patriot Act at a rally in Florida. I clearly recall Bob noting that when Bill Clinton was President, Democrats tried to pass the Patriot Act (under another name), but it was rejected by a Republican Congress. But when George W. Bush proposed the same bill under the name of The USA Patriot Act (which Congressman Barr said was almost word-for-word the same bill that the GOP had defeated just a few years before), a Republican Congress quickly passed it.

That’s the way things work in Washington, D.C. Neither party cares a flip about the Bill of Rights or the Constitution. All they care about is power. Face it, folks: both parties are working in tandem to turn the United States into a giant Police State. Furthermore, the national news media (including FOX News) is in total lockstep with this proliferating Police State.

Writing for GlobalResearch.Ca, Stephen Lendman reports, “Freedom in America is being systematically destroyed: one police state law at a time–with most people ignorant and/or indifferent about what happening.

“If enacted, Section 603 will require online companies to inform Washington of any ‘actual knowledge’ of ‘facts and circumstances’ related to undefined ‘terrorist activity’–meaning warrantless searches and seizures of personal electronic content will be authorized, potentially subjecting countless numbers of innocent people to unjustifiable scrutiny.

The report continued, saying, “One definition of terrorist activity can be another’s way of describing freedom fighting. Legitimate government criticism could be misinterpreted and misused.

“Anyone ideologically opposed to US policies could become vulnerable to arrest, prosecution, conviction and imprisonment for expressing their views online. Police states operate this way.

“Senate members overwhelmingly support S. 1705. Before recessing until September, they were set to pass it by voice vote [meaning automatic passage with no recorded votes of individual senators] until Senator Ron Wyden objected.”

The report goes on to say, “He [Wyden] knows of no law enforcement or intelligence agencies suggesting Section 603 will help identify terrorists. He urges revision or elimination of this section altogether.

“They warned of concerns raised above. Innocent people committing no crimes would be at risk. ‘Complying with Section 603 would create a chilling effect on constitutionally protected speech and would impermissibly burden individuals’ First and Fourth Amendment rights,’ they said.

“‘Whether a given comment is a true threat of violence, an expression of a sincerely held religious belief, or a simple joke among friends is a determination that providers are ill-suited to make, particularly when the consequence is reporting a person to the government under the suspicion of involvement in terrorist activities.’”

If it wasn’t for independent Internet news sources such as the one quoted above, most of us would not even know anything about Section 603 of the Senate Intelligence Authorization Act. No more than most Americans know anything about Sections 1021 and 1022 of the NDAA that authorizes the indefinite detention of American citizens based purely on the federal government’s suspicion of undefined and vaguely-described “terrorist” activity–an unabashed totalitarian provision that was passed by both Democrat and Republican congresses. The national news media (including FOX News) is completely apathetic to informing the American people about the constant and deliberate manufacturing of a Police State by our federal government.

And this review by Congressman Justin Amash (R-Michigan).

And also this review in the Harvard Law Record.

But the thing that really galls me is the apathy and indifference to this proliferating Police State by my fellow Christians and “conservatives.” I looked at the complete list of the organizations sponsoring the letter of objection to senate leaders referenced above, and the majority of them would be considered “liberal” by most folks. One notable exception is Ron Paul’s Campaign For Liberty. And, yes, there are a few others.

What is it with most Christians and conservatives? Do they really desire a Police State? Do they have a death wish for America? Is the Church’s misinterpretation of Romans 13 truly sedating Christian people into accepting a draconian Police State in this country? I believe the answer is a resounding “YES!”

For at least the last half-century, America’s Christians have had “obey the government” beat into their heads like Chinese water torture. The result is an omnipresent attitude among Christians that we must ALWAYS submit to government–no matter what. This helps explain many things, doesn’t it?

Since Christians are taught to not resist government, they don’t believe they should resist legalized abortion, or legalized same-sex marriage, or legalized anything else–including a legalized Police State.

Most pastors and Christians will not be willing to admit it, but the erroneous “obey-the-government-no-matter-what” interpretation of Romans 13 has made idolatry fashionable in most churches. In reality, the Hitlerian interpretation of Romans 13 commonly taught in America’s churches today means government, not God, is sovereign. This makes Christians who embrace such a doctrine practicing idolaters.

I again remind readers that my attorney son and I co-authored a book entitled, “Romans 13: The True Meaning of Submission.” In this book, we expose the myth that the Bible teaches unlimited submission to civil government. We show from both testaments that God NEVER expected that His children should voluntarily submit to tyrannical government. Find the book here.

Plus, in the minds of millions of Christians around the country, if FOX News doesn’t cover it, it must not be important. And, except for John Stossel (on FOX Business News), FOX News is not saying diddly squat about the burgeoning Police State taking shape in our country. Nada. Zilch. Nothing. You noticed the subject was never broached by the FOX News moderators during the recent Republican presidential debate.

Think what could happen if just a few of these men would start being watchmen on the wall for freedom in this country and begin calling our politicians (of both parties) to task for their willingness to facilitate a form of government resembling those created by Hitler, Stalin, and Mao. The time to do something about it is before the curtain falls, folks. Not after.

Winston Churchill once said, “If you will not fight for the right when you can easily win without bloodshed; if you will not fight when your victory will be sure and not too costly; you may come to the moment when you will have to fight with all the odds against you and only a precarious chance of survival. There may even be a worse case. You may have to fight when there is no hope of victory, because it is better to perish than live as slaves.”

It appears that many of our pastors and Christians would rather live as slaves.

Churchill also said, “An appeaser is one who feeds a crocodile, hoping it will eat him last.”

Is that what our pastors and churches are hoping? Are they really hoping that by feeding the alligator of a burgeoning Police State they will be eaten last? It appears so.

When it comes to the Bill of Rights, including the Fourth Amendment, Fifth Amendment, etc., there is no such thing as “liberal” or “conservative,” Democrat or Republican: there is only freedom or slavery. So, I don’t care if Oregon’s Senator Wyden is a “liberal” Democrat; he stood up for the Bill of Rights when he opposed Section 603 of the Intelligence Authorization Act for Fiscal Year 2016. I wish our “conservative Republican” friends in the Senate had the guts to do the same thing.

The four-message DVD is a highlighted digest of the more detailed book. So, actually, the book and DVD combination would make a great set.