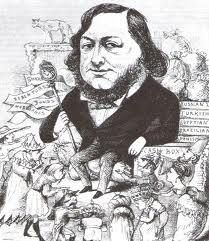 This period cartoon illustrates the crowned heads of Europe — the ostensible rulers of the day — bowing before Lionel Rothschild on his throne of mortgages, loans and cash. In fact, this was the reality of the day, the effective fruition of the age-old Jewish dream of a New World Order — a Jewish Utopia — in which all other peoples of the planet would bow down and worship the Jewish people, the new rulers of the Earth. For good reason, indeed, Rothschild was known as the “king of kings.” (Michael Collins Piper- The New Babylon)

The ideology behind the New World Order may be Jewish Messianism, the view that God has chosen “the King of the Jews” to rule the world. This “Messiah,” or antichrist, will be selected from the ranks of the Rothschild family.

This argument is espoused in a rare, suppressed book entitled “Elijah, Rothschilds and the Ark of the Covenant” by Tom Crotser & Jeremiah Patrick (Restoration Press, 1984.)

The book details the Rothschild’s quest for and discovery of the Ark of the Covenant, a gold-covered box supposedly built by Moses to hold  Aaron’s Rod and the original Ten Commandment tablets. Apparently the Rothschilds intend to place this in Salomon’s Temple in Jerusalem to legitimize their claim to be the Messiah. 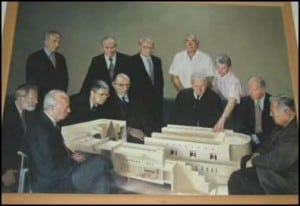 According to the authors, this bizarre vision rooted in Biblical prophesy is behind economic and political events today. The Zionist vision is much larger than a Jewish homeland.  “The Messianic hope promises the establishment by the Jews of world power in Palestine to which all the nations of the earth will pay homage.”  (p. 29)

“This glorious age can only be affected by a man, a scion of the House of David” who will lead the Jews to “righteousness” and “regenerate” the human race.

According to the Talmud, this Messiah from the seed of David shall subjugate the heathen nations and make Israel the world power.

Summarizing the Talmud, Rabbi Michael Higger wrote that:  “All the treasures and natural resources of the world will eventually come in possession of the righteous.” This, he said, would be in keeping, with thy prophecy of Isaiah: “In her gain and her hire shall be holiness to the Lord; it shall be not treasured nor laid out, for her gain shall be for them that dwell before the Lord, to eat their fill and for stately clothing.” (The Jewish Utopia, 1932)

Obviously, the majority of Jews are not informed of this plan, the easier to manipulate them. 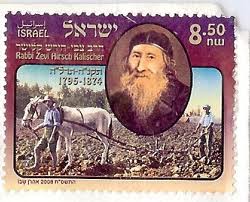 The Rothschilds saw themselves in the role of Messiah-facilitator, if not Messiah.

As early as 1836, Anselm Meyer Rothschild received a letter from rabbi Hirsch Kalischer, who revealed to him the divine plan: “Let no one imagine that the Messiah will appear suddenly and amid miracles and wonders, lead the Israelites to their ancient inheritance. The beginning of the redemption will be in a natural way, by the desire of the Jews to settle in Palestine, and the willingness of the nations to help them in this work.”

When we consider that the Jewish holocaust was critical for the establishment of Israel, Messianism gives modern history a totally new twist. The holocaust likely was part of a plan to prepare the groundwork for the appearance of a Jewish Messiah.  After Jews had returned to Palestine and the Temple was rebuilt, “then will God show them all the miracles in accordance with the description given by the prophets and the sages…God will send His prophet and his anointed king,” Kalischer wrote. 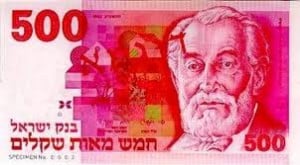 Edmund de Rothschild engineered the famous Dreyfus Affair in order to create anti-Semitism and force Jews to support Israel as a refuge.

He established his own administration in Palestine, set up agricultural colonies and bought all the produce at a fixed price. Between 1887 and 1899, he made three trips to his many far flung settlements.

The authors write: “Note that this is not a suggestion given in the Scriptures. It is a command from the God of Israel. Lending upon usury is how to possess the land.” (175)

“Lending on interest for consumer and emergency needs became a virtual Jewish monopoly in Western Europe between the 12th and 15th centuries…As security, real estate was most preferred. In this way Jews acquired in pledge houses, vineyards, farms, villages, castles, towns, and even provinces. ” (177)

“The rise of absolute monarchies in Central Europe brought numbers of Jews into the influential position of negotiating loans for the various royal courts. The phenomenon of court Jews now continued into Europe. The most famous included Lehmann, Oppenheimer and Goldschmidt in Germany and Austria.” (180)

“Jean Izolulet, a member of the Jewish Alliance Israelite Universal wrote in 1932: ‘The meaning of history of the last century is that today 300 Jewish financiers, all masters of lodges, rule the world.” (183)

Edmund de Rothschild was playing a role in a larger drama which would see his successor finally become the anti-Christ. This required that Jews return to Palestine, and that required a huge Rothschild-organized pogrom in Europe. (see “Hitler was a Godsend for Israel” )

The author of The Protocols of the Elders of Zion repeatedly refers to world conquest in terms of “when we have come into our kingdom.” I am convinced he was a Rothschild.

Jewish Messianism throws both historical and current events into new perspective. Through debt, the Rothschild syndicate is bending the nations of the world to their will. Through the “Arab Spring” and the destruction of Libya and Syria, stragglers are brought into line. Finally, Iran may be brought to heel in a war pitting Rothschild’s NATO client states against Iran and possibly Russia and China, also client states.

The Cabalist Jewish bankers (the Illuminati) have a long-range plan for the ascendance of their “Messiah.”  Actually the antichrist, he will be “the King of the Jews” to be selected from the House of Rothschild. Unfortunately, the “Messiah” who will emerge from this turmoil will not redeem the world. Rather he will condemn mankind to centuries of suffering and darkness. Most Jews are not privy to this plan.

We have the dubious honor of witnessing the consummation of a centuries-old plan for world tyranny based on satanic megalomania and demented Biblical prophesies.

Thanks to V and Mark for the book.

Related- Has the Ark of the Covenant Been Found?

– – ——–The perverse Cabalist doomsday dogma that believes chaos is required to call forth the Jewish Messiah.