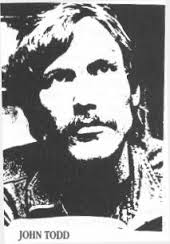 The highest ranking Illuminati defector may be a prisoner in a US prison hospital. Born in 1950, he would be only 66 today. Despite death reports, Diana thinks he may be alive:

“I’m writing because I am an avid reader of your website. I saw once that you posted an article on a conspiracy researcher named John Todd and in the article you asked if someone could find out whether John was alive still or not. Well I have been researching John’s steps from the time he became imprisoned and I have found evidence pointing to the fact that he may still be alive but is being held secretly in a Illuminati privatized prison.

I began my search by searching online through records.  I found a lawsuit that John filed under the name Kris Sarayn Kollyns in early August of 2007 stating how his rights had been violated while being under the care of a mental hospital called Columbia Regional Care Center. Well in early November 2007, the judicial court and the magistrate dismissed John’s lawsuit claiming the fact that he died on the 10th of November and had not appeared in court to argue regarding his lawsuit.

Skip forward to November 28th, 2007, where John, under the name Kris Sarayn Kollyns, filed another lawsuit appealing the dismissal of his lawsuit over the fact that he was dead.

Now how could he have died on the 10th of November 2007 and then have filed a claim on the 28th of November contesting his own death? Then there’s more, I did a background search on John and found out that from 2008 until this present day he’s been at Columbia Regional Care Center and I found out that Columbia Regional Care Center is owned by GEO Care Inc., which is an Illuminati company that builds privatized prisons and FEMA Camps.

Also I found online a photo and a website that states that John was buried under the name Kris Sarayn Kollyns in Florence VA cemetery in Florence, South Carolina in 2007 but the government and everyone who was around him who were trying to discredit him said John was dishonorably discharged and you can not be buried at a VA cemetery if you have been dishonorably discharged so how did they get him buried there? Perhaps because he’s not there, it’s all included in their plot to keep up the belief that he is deceased.

All of this has led me to believe they are keeping John there secretly and claimed him to be deceased so that he can not file anymore lawsuits against them and so that no one could work on his behalf to get him out and he could remain there for the rest of his life, because everyone would be under the belief that he passed away. Because if he were to be released, he would go back to exposing even more truths about the government and the Illuminati.

Henry I’m writing you as a fellow, young conspiracy researcher myself, asking you to help me find out what’s really happening here and what the truth is. …I can’t do this all on my own and so I’m reaching out for help .. If it’s no more than posting about this situation on your website and asking your readers to help do something, asking them to research and dig for the truth and help John get released from this place. Because I truly believe John is being held there and more so than likely being drugged and medicated secretly and illegally and no one is trying to help this man get released from this Illuminati prison.

If conspiracy researcher Kent Hovind had supporters helping him get released and the same with Fritz, then we need to do this for John. He was falsely imprisoned because he blew the whistle on the truth and now I believe he’s still being held there, please Henry help me get the word out about this situation, about the fact that he may still be locked up there secretly and help me get the word out that we as his supporters and as supporters of the truth and fighters of the new world order and the Illuminati – we need to do something to get this man free.

I truly hope you can help as this means a lot to me. I didn’t know John personally but his tapes inspired me to become the conspiracy researcher that I am today and it’s just devastating to know he’s being held behind Illuminati prison bars to keep him from exposing anymore of the truth.

https://billiongraves.com/burial-record/CHRISTOPHER-SARAYN-KOLLYNS/26459208# (This link here names Kristopher as “Christopher”, which according to court records was not how he spelled his name. That is one mysterious contradiction (among many) regarding his death right there.)

http://www.illuminatirex.com/illuminati-whistleblowers/#todd – a site stating that John was dishonourably discharged, therefore excluding him from being buried in VA cemetery.

Makow – If readers have any ideas,  please contact me at hmakow@gmail.com